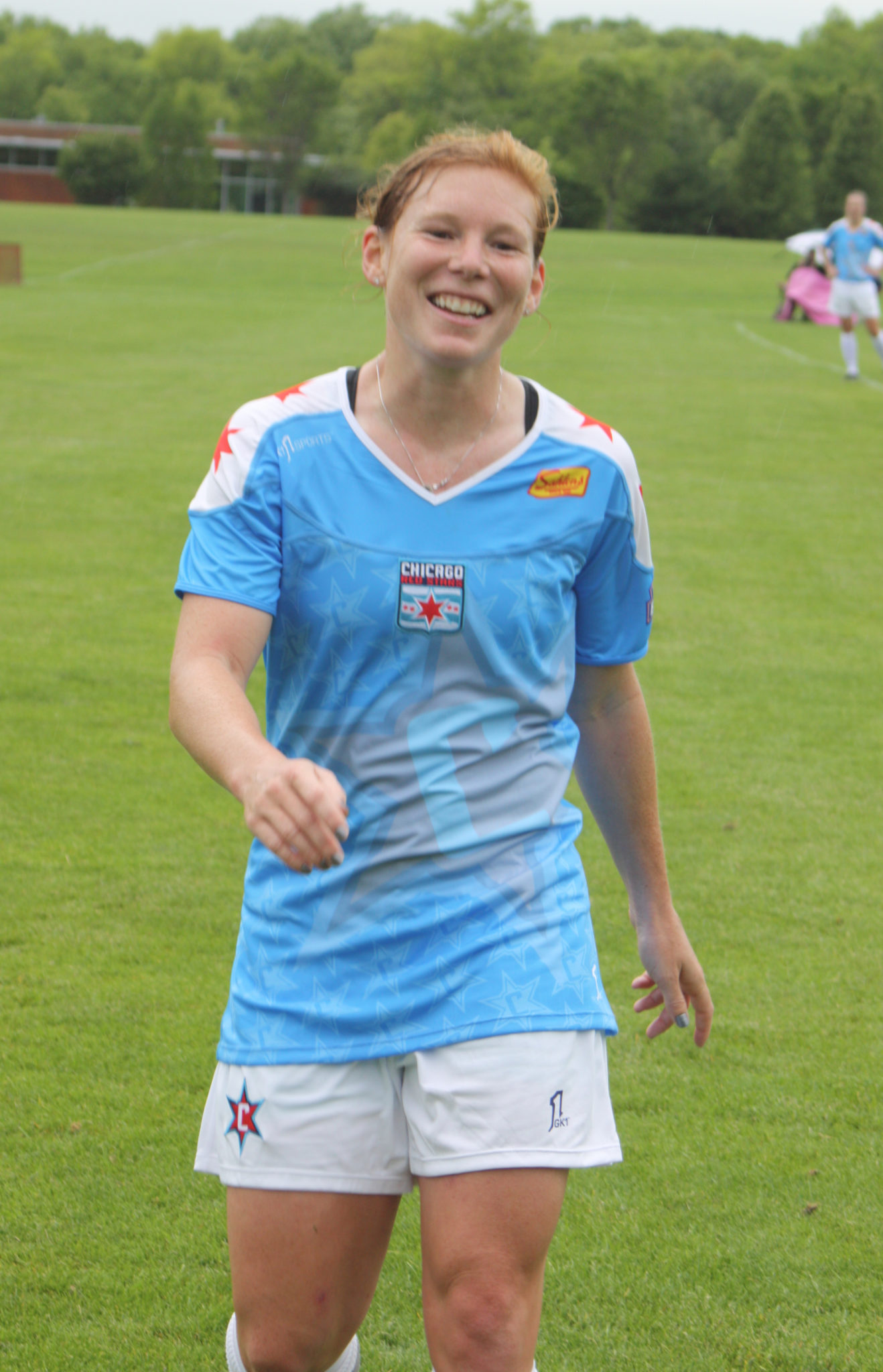 EVANSTON, Ill. — Along the blue shores of Lake Michigan, the Chicago Red Stars defeated the visiting New England Mutiny 4-0 on Saturday evening to bounce back from their first defeat of the season, a 0-3 loss on the road to the Western New York Flash last Wednesday.

The Mutiny were looking for their second road win of the week, having narrowly defeated FC Indiana 3-2 on Thursday. The victory moved the Red Stars to the top of the standings in WPSL Elite.

Team captain Lori Chalupny said the Red Stars came into Saturday’s game with their recent loss fresh in their memory.

“This is our halfway point through the season,” she said. “After dropping the game in New York, we just felt that this was a way to get back on track and end this half on a good note and get into first place in the league, which is all we can ask for.”

The first half opened with both teams fighting for possession, often struggling to string together passes to move the ball past the midfield. The Red Stars and Mutiny traded offensive chances early on. New England struck in the first four minutes, pressuring Red Stars defender Julianne Sitch to win the ball for a shot just wide. Red Stars forward Michele Weissenhofer responded with back-to-back shots in the following four minutes — one across the goal going wide, and a second scooped up by Mutiny goalkeeper Vikki Alonzo.

Despite back-and-forth play early on, the Mutiny offense was kept in check by a tight-knit Red Stars defensive line. Right back Lauren Alkek swept several balls away from insistent Mutiny forward Kate Howarth to prevent an offensive breakthrough. An Alkek-Howarth footrace in the 14th minute found Alkek heading away a long ball meant for Howarth. In the next minute, Alkek was key in intercepting a through ball that would have given New England an open look at goal.

“I was just trying to wrap tight and not let anything happen.” Alkek said. “I think we were able to execute what we’ve been practicing, working on our defensive shape. We were able to stay connected and communicate today and I think that really helped us get forward.”

The Red Stars lit up the scoreboard in the 35th minute, when a hard ball across the goal from Amanda Cinalli found an advancing Weissenhofer, who drilled the ball into the net for a 1-0 lead.

The sun went down toward the end of the first half, and a strong breeze indicative of future thunderstorms blew up off of the lake to begin the second half. The Red Stars dominated the second half of the game, scoring 3 additional goals and continuing to deny the Mutiny offense to seal the win.

Red Stars second half substitute Kara Kabellis made an immediate impact on the game, with two corner kicks in the 68th and 73rd minutes leading directly to goals. On the Red Stars second goal of the game, Sitch flipped a pass from Kabellis into the air and over the top Cinalli for the goal. Five minutes later, Kabellis’ corner was pushed into the goal by Red Stars forward Lauren Fowlkes.

The final goal of the game came in the 84th minute, when midfielder Chalupny rocketed a shot into the side of the net.

“I think our attacking third was great,” Chalupny said. “We got a lot of people involved, with a lot of movement, and it paid off with some goals for us. Alyssa Mautz, she laid a ball off to me, and I was able to look at goal and go at them a little bit, and picked out the corner.”

Half of the Red Stars squad was absent from Saturday’s WPSL contest, competing in the U.S. Women’s Open Cup in Fort Wayne, Indiana. With three victories on Saturday and a tie on Sunday, the Red Stars advance to the national finals to be held at Chicago’s Toyota Park the weekend of July 20th-22nd.

Red Stars General Manager Alyse LaHue said that after a demanding schedule of competition, the Red Stars are looking to get back into training in the upcoming week.

“We’ve come out of the weekend with four wins so far, so this caps off the first half of the season,” LaHue said. “I think the team is happy to get back into training. We’ve seen so little real training time with so many games back-to-back that we can’t get in a really solid session. I think the team is excited to take the first half of the season, look ahead, and actually get a few practice days in together as a group.”

The Red Stars will travel to the East Coast next weekend for games against the Chesapeake Charge (Friday, 7 p.m. ET) and the Philly Fever (Sunday, 7:30 p.m. ET).