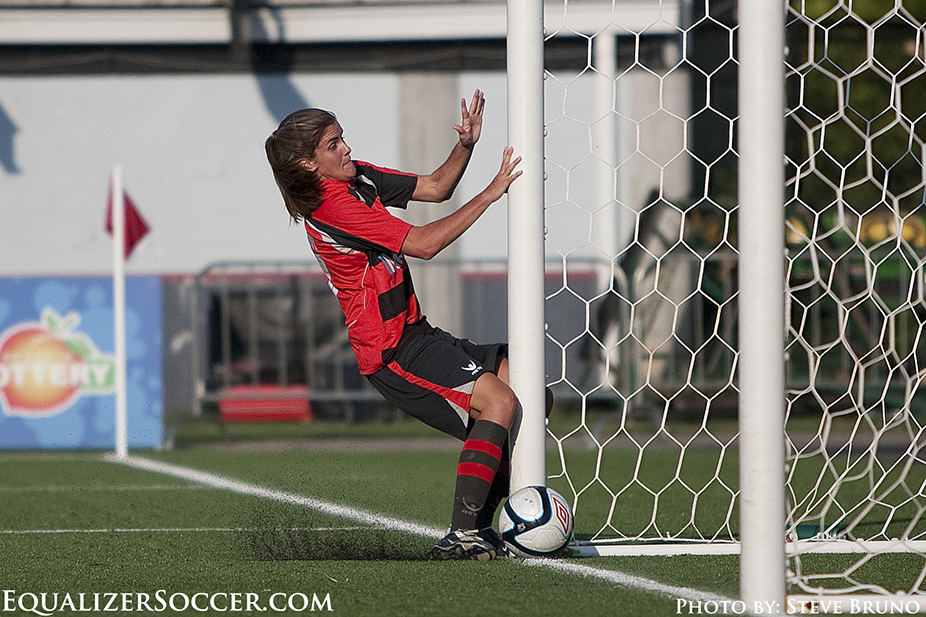 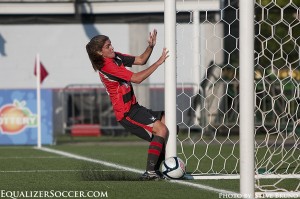 Kristin Burton scored her fifth goal of the season for Atlanta in a 5-0 win over Tampa on Friday. (Photo Copyright: Steve Bruno)

The Atlanta Silverbacks started a critical weekend series with a 5-0 win over VSI Tampa Flames on Friday night. Forward Kristin Burton scored in her fifth consecutive game as four other Silverbacks put their names in the goal-scoring hat as well.

Returning to the lineup this week were captains Rebecca Nolin and Ronda Brooks as well as left back Nikki Hill. Connie Organ started in goal again with Ashley Baker away on international duty with the England U-23 squad.

Before the opening whistle blew in Atlanta, the Lady Eagles were already soaring to victory, leading the Cobras 2-0 under 30 minutes into that match.

Atlanta opened a two goal first half lead of their own in the 10th minute as a ball into the box by Nolin bobbled through an unsure Flames defense. Forward Kristin Burton astutely followed the ball as it rolled toward the net.

“The ‘keeper came out and Becks just kind of dinked it by her,” said Burton of the confusion in the box. “I was going to let the ball roll in because I didn’t want to take her goal away.”

The path of the ball, however, took it straight to the post, and Burton, unencumbered by defenders, tapped it in as she wrapped around the post.

“Obviously I’m happy to be in the right place at the right time,” Burton said, adding humbly that several of her goals this season “haven’t been anything I’d be really proud of.”

“She’s a goal-scorer,” Adams said of the first-year Silverback. “Some forwards lack confidence and you have to encourage them to get forward. Well, she’s not one of those.

“She’s… a soft-spoken kid, a bit shy, to be truthful,” the coach says about her modesty, “Just quietly goes about her job and you don’t even know she’s there until you look at the stat sheet.”

Another defensive blunder eight minutes later set up the second goal as ‘keeper Jennifer Manis, walking a fine line at the edge of her box, panicked on a headed ball back and handled the ball just outside the box. Unable to redeem herself on the ensuing free kick, Manis dove hopefully but ineffectively for Stacey Balaam’s superbly-struck ball, which curved into the back of the net for the midfielder’s second goal of the season.

One state over, CSC Cobras were giving the Lady Eagles all they could handle, fighting back from the two-goal deficit to go into the half down a goal.

Atlanta wasn’t really troubled with the same possibility, but were unable to put the game to bed as an attack based on speculative, direct balls found no real chances on the attacking end.

“In the first half, we were trying to play way too many, what I would call ‘Houdini’ balls and fit balls in places that they’re just not going to fit,” Adams said of their halftime talk. “So (the second half) was more about getting back to basics,”

After nearly 20 minutes of second half play, the team was unable to make any further improvements on the scoreboard and, with the biggest game so far this season looming the next night, Adams began making substitutions to rest his starters.

Two hundred-plus miles away, the plucky Cobras, who have given Atlanta so many problems in their two meetings, did the red and black a huge favor, drawing level with the Lady Eagles before the final whistle for Charlotte’s first dropped points of the season.

With the result from Columbia twittering through the stands, Adams began sending in the subs every few minutes, giving his key starters some rest. For Tampa, however, there would be no rest.

Right wing Tiffini Turpin charged up the flank as substitute Rachel Garcia camped out at the edge of the box. Turpin whipped the ball in and Garcia, with a defender on her hip and the ‘keeper rushing at her, showed exceptional composure to pop the ball over Manis, finally putting the game beyond reach for Tampa.

Garcia has been an excellent addition to the team this season, with a physical toughness and skill on the ball that belie her age. Her goal and assist tonight drew particular praise from Adams, who has been impressed with her improvement over the last month.

“From game to game her growth is tremendous,” Adams said. “Her ceiling is unlimited right now, being that she has one more year of high school. I can’t even imagine her playing in a high school game, to be truthful.”

Turpin subbed out immediately following her assist in favor of Nkese Udoh, who picked up the baton and ran straight back into the Flames’ goal with it.

Again, building up from the right, Udoh carried the ball through the defensive Swiss cheese and into Tampa’s box. A curious feeling of déjà vu nagging at the back of her mind, Manis ran out to break up the attack only to see Udoh’s ball gracefully rainbow over her head and into the back of the net for the second goal in as many minutes.

“Each substitution that we made, I thought the level went up.” Adams said of his bench players, who accounted for all three second half goals. “We thought the bench won the game for us tonight.”

Left back Nikki Hill contributed to the final goal in the dying minutes as she found Emily Dover in the center of the box. Positioned on the PK spot and with her back to goal, Dover received the ball in traffic, spun and rifled it into the back of the net. Dover, who also played under Adams at North Georgia College, netted her first goal of the season after just seven minutes on the field.

As the Tampa frame turned into a target range for the subs, Adams says Nolin – holding mid and team comedian – turned to him and asked, part jokingly, part critically, if he had considered starting the subs instead.

“That’s the kind of selflessness we have in this group,” says Adams about his team’s championship-winning character. “Here Becks is calling herself and some of the starters out because the bench players won the game for us tonight. We’ll have a bit of fun at our own expense and I think that goes a long way for us. We like to have a good time and handle stuff with humor. That allows some of the adversity to just roll off your back when it’s a long season.”

Although she says she’s not keeping track herself, Hill’s assist on the goal was her fifth of the season, ranking her second in the league.

“I love getting forward and getting into the attack,” the University of Georgia junior said. “One thing I… focus on is being really an attacking outside back, so I’ve been happy to help the team in that way so far this season.”

Quietly wrapping up business on the other half of the park, Hill, Kansas Bayly, Ronda Brooks and Bailey Powell, along with backup goalkeeper Organ, combined to pitch another shutout, remaining one of only two teams in the W-League who have allowed only one goal all season, the other being the Seattle Sounders Women. (Editor’s note: Atlanta drew 2-2 with Charlotte on Saturday.)

Hill says that, although she and Bayly like to alternate getting into the attack, keeping the opponent scoreless is top priority.

“It’s definitely more important for us to get the shutout than for our outside backs to get forward,” the Canadian U-20 international said, “but if you can do both that’s definitely what we need.”

“Our back four, collectively, are all so solid that any one of them may not stick out on the day,” Adams said. “But their ability to work together and play together deserves some accolades.”