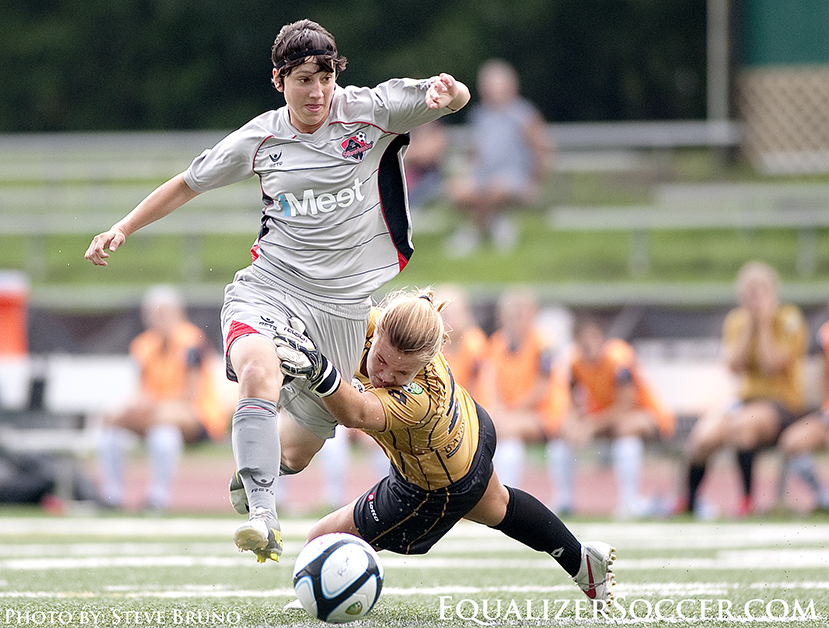 JACKSONVILLE, Fla. – The Atlanta Silverbacks’ traveled a rocky road in their first away game of the season, but left Florida with maximum points after a 3-0 win over FC Jax Destroyers on Sunday. A goal apiece from usual suspects Tiffini Turpin, Libby Guess and Krisitin Burton capped a weekend of adversity featuring the loss of four starters, endless rain, lightning strikes and a dining disaster.

With goalkeeper Ashley Baker, midfielder Rebecca Nolin and defender Ronda Brooks all unavailable due to various commitments, the team faced an adjustment of chiropractic proportions to their much-vaunted spine. Adding the loss of last week’s W-League Team of the Week honoree Nikki Hill at left back meant the team had an uphill climb going into Jacksonville.

Head coach Chris Adams’ team was prepared, though, with virtually all his bench players seeing significant minutes in the weeks preceding Sunday’s game.

“It’s not our strongest lineup,” Adams said, “but I think it speaks to the depth that we have that you can take those people out, you can go on the road and we’re still strong enough to get a result of 3-0… that’s what I’m most pleased with.”

Acting co-captain Stacey Balaam reiterated the team’s confidence in all players across the board.

“We knew that we were going to be traveling with the lack of numbers,” Balaam said. “But not once did we think that we were going with a depleted squad because we’ve got so much depth and so much talent that anyone can come on and do a job.”

Moving into the open positions were goalkeeper Connie Organ, center back Leilani Huntley and left back Casey Smith, while Nicole Locandro continued at holding mid with Libby Guess dropping into the attacking midfield position, allowing Rachel Garcia to lead the attack.

Preparedness on the field is one thing, but lineup adjustments were probably the least-troublesome hurdle the team encountered this weekend.

Rather than flaunt their reigning W-League Champion status, the group prefers to travel modestly without the fanfare and hoopla normally afforded a team of their pedigree. Unfortunately, a simple advance request for reservations wasn’t met by a restaurant, leading to a nightmarish stop for dinner near the Georgia/Florida border. Players pecked away at bread and salad for over two hours, waiting patiently for a main course which arrived unfashionably late and cold. As the journey continued, torrential rains further hampered the team’s trip, ensuring they would arrive at their hotel overdue, weary and irritable.

Finding the proverbial silver lining in the stormy cloud which followed the team to Jacksonville, Balaam sees the experience as an exercise in overcoming obstacles.

“It just shows the amount of character we have in the team and it builds us up to kind of get over the adversity,” Balaam said of the calamitous meal. “We laugh about it now… and we over-dramatize at times, but it’s just hilarious, and then we go on the field and we just have to take care of business, so we kind of leave it all on there.’

Dull, dismal skies hung overhead before Sunday’s game and the Silverbacks seemed to echo the weather on the field as they came out with a flat, uninspired performance in the opening minutes.

A nearby bolt of lightning a quarter-hour into the match sent fans and players running for cover as heavy rains followed. The downpour gave the Silverbacks time to regroup in the locker room, revising their strategy and catching up on the Euro 2012 tournament.

The deluge eventually relented after an hour-and-a-half delay and Atlanta came out cleansed of their earlier sluggishness, playing with a new attitude that paid dividends almost immediately.

In the 21st minute, Tiffini Turpin received the ball on a breakaway down the left flank, steamrolling past Jax defender Kelly Andres. With goalkeeper Erin Moseley the final pin standing, the relentless forward bowled in toward the goal. Moseley came out to the edge of her box to cut down Turpin’s angle, but the tenacious winger continued on a collision course with the ‘keeper. Cutting in to her right at the last instant, Turpin leaped past as the sprawling Moseley desperately tried to pull her down, but the former Blazer kept her balance and composure to stay on her feet. With Moseley beaten, Turpin had an easy shot on goal from close range for her third score in as many games.

Adams credits his team and their recognition of the lackluster performance in the first 15 with their improvement at the restart.

“Anytime you take a group this talented and this experienced… when given the opportunity for a ‘do-over’, they’re going to make the most of it,” Adams said. “From the 15-minute mark when we came out from the long rain delay, I thought we were switched on before they were and I think that made the difference.”

Four minutes later, a Silverbacks shot into a crowded penalty box forced Moseley into a quick save, but the ‘keeper was only able to parry the ball back into danger. With the Destroyers’ defense unable to clear the ball from the area, the scramble became a pinball game before the ball eventually fell to Libby Guess who shot toward the far post for the second goal.

“Right place, right time,” Guess said of her fourth goal of the season. “I think it deflected off five different players… I was kind of just trailing in the box waiting around for something to pop out and it did, right at me.”

Eager to avoid a repeat of last week’s tense 2-1 victory over Central SC Cobras, Atlanta continued to push forward for the third goal which would put the game beyond reach.

Kristin Burton provided the cushion in the 57th minute as the athletic forward drove downfield, picking up Jax defender Ally Lee on her way into the 18-yard-box. The Destroyers’ captain was unable to muscle her off the ball, though, and Burton struck a dagger-like shot in-stride past Moseley for the third goal and her fourth of the season.

Burton’s goal ties her with Guess for the team lead while Turpin is just one behind in the race for the Golden Banana. Guess’10 points are a team best while Burton trails by one. Guess admits, though, the players don’t have an internal scoring battle at stake.

“We haven’t even talked about it,” Guess said. “It’s not like that at all with us, we’re always happy for each other to score,” she added, also pointing out with a laugh, “Any goals are good goals.”

FC Jax were not without their moments as they began to enjoy extended spells of possession later in the second half. Connie Organ, in her first start of the season in goal, performed admirably, using all of her 6-foot frame to push several Destroyers efforts beyond the net. The UCF goalkeeper says the communication amongst the back four helped take the pressure off her.

“They usually have it under control and they’re good with talking to each other to make sure it happens like that,” Organ said of her defensive line, adding that the comfort level was high no matter who she had in front of her. “I’m really comfortable with them and really confident in them. Even the players that come off the bench in defense work really well together.”

With the win, Atlanta (5-0-0) keeps the pressure on division leaders Charlotte Lady Eagles (7-0-0) who had the weekend off following a dominating three-game sweep of Florida teams which saw them overtake the Silverbacks atop the Southeast. Both teams have a game Friday night before their first head-to-head showdown Saturday night in Charlotte.

Korrio partners with D.C. United
USWNT games in Sweden will be aired on Universal Sports