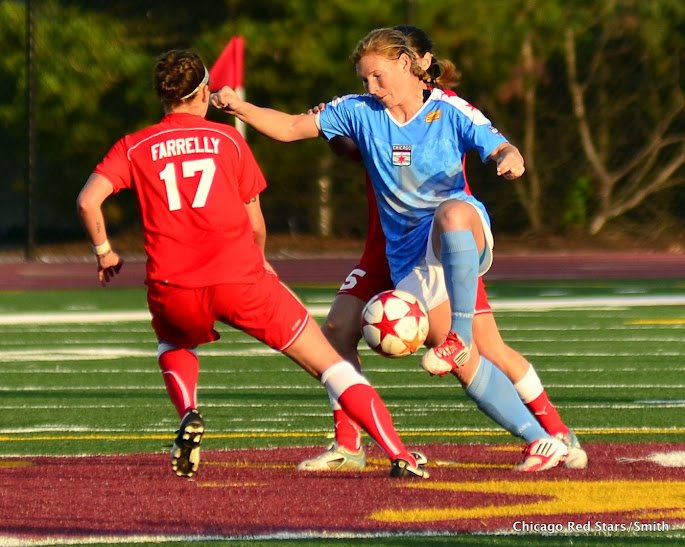 The Chicago Red Stars ended the weekend with a 5-0 win over visiting ASA Chesapeake Charge at North Central College in Naperville, IL. Both teams had played the previous Friday, with the Charge and the New York Fury in town for Midwest contests against the Red Stars and FC Indiana. With the win, the Red Stars advance to a 5-0-0 record, and remain the lone unbeaten team in WPSL Elite.

Red Stars starting goalkeeper Jamie Forbes said the team knew that a second weekend game would be a challenge.

“We knew that it was going to be a tough weekend, so we needed to get our legs under us and come out hard and pressure. Just making sure we force the ball inside and go to goal as much as possible to get the lead,” Forbes said.

The Red Stars went deep into their lineup throughout a game marked by changes in possession and frequent throw-ins and corner kicks. The first 20 minutes comprised a fast-paced battle for possession and control through the midfield on the fast, bouncy turf at Benedetti-Wehrli Stadium. The Charge were the first to strike, with a cross from the left side and a leaping header by Cheyenne Skidmore that went over the goal. The Red Stars responded a few minutes later with a shot from Amanda Cinalli bouncing off the left post.

Halfway into the half, Forbes tipped two close shots over the bar and punched away a corner kick by the Charge’s Riley Barger to maintain a scoreless game.

“It was early in the game, and we were still trying to get our legs,” Forbes said. “It is a one save deal breaker if a goal goes in. It’s a different game. So keeping the shutout, and keeping no goals in the first half was especially crucial.”

The Red Stars offense heated up toward the end of the half. In minute 30, a cross from team captain Lori Chalupny and found a diving Michele Weissenhofer at the far post, but her shot went just wide. Two minutes later, a ball in from Weissenhofer found forward Lauren Fowlkes, who headed the ball over the top of the Charge goalkeeper to make it 1-0. The half ended with a second Red Stars tally, as Chalupny hammered one in off a pass from Alyssa Mautz in minute 39.

The pace of the game slowed in the second half, as the rising heat and exhaustion took a toll of both sides. The Red Stars battled for possession through most of the half before finding their offensive strength in the final 12 minutes. Lauren Fowlkes scored back-to-back goals off of passes from Cinalli, while Zoey Goralski found the net in minute 86 on an assist from Ashlee Elliot.

“As a forward, sometimes you get the look, sometimes you don’t. I think I found myself in pretty good spots and we were able to string together some good combinations that I was able to get on the end of,” Fowlkes said.

The Red Stars face the Western New York Flash on Wednesday at Sahlen’s Stadium in Rochester, NY at 7 p.m. ET. Chicago returns home next Saturday, June 16, with a 7 p.m. ET game against the New England Mutiny.