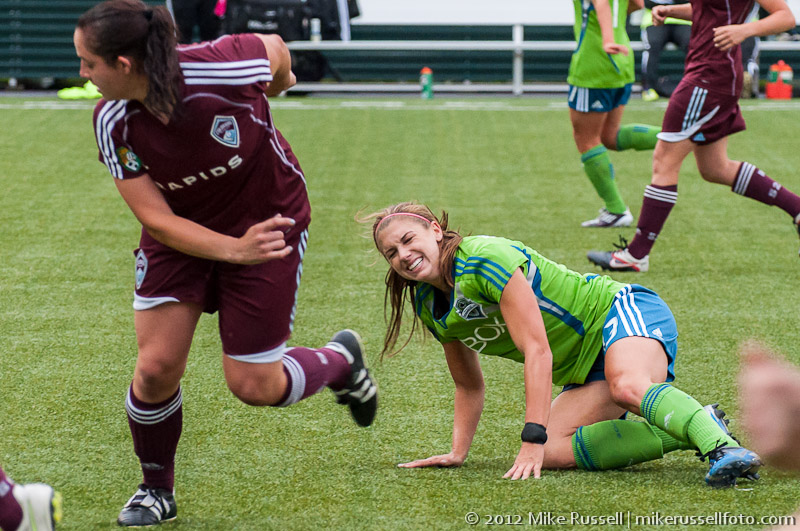 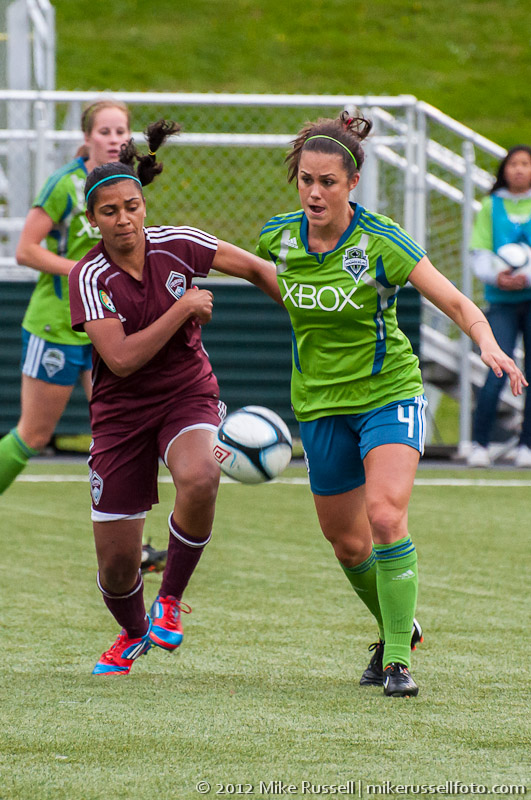 TUKWILA, Wash. — In the first 10 minutes, the Seattle Sounders Women scored twice. It was all they needed to beat the Colorado Rapids Women, even before Stephanie Cox added a third goal to fill out a 3-0 win Monday night at Starfire Stadium.

It took just three minutes for the Sounders to score their first goal. Alex Morgan netted her first of the season for Seattle, heading in a cross from Kara Kuttler at the top of the six-yard box.

“She’s had a little bit of time to recover from the camp that [the U.S. national team] had before our last game, so she was just a little bit sharper and a little bit cleaner tonight, and I think that paid dividends for her,” Seattle head coach Michelle French said of Morgan’s performance.

Veronica Perez nearly doubled the Sounders’ lead two minutes later. The Mexican international received a through ball from Julia Roberts on the right side of the Rapids’ penalty box, but she put her shot inches wide of the right post.

However, the Sounders quickly added a second.

This time, Morgan played provider, slotting a ball across the six-yard box on the ground to Lyndsey Patterson, who tapped it in. Seattle had an early cushion in the ninth minute, and the game looked like it was headed for a lopsided score.

“The two early goals really set the tone of the game,” French said. “We had a little bit of a lull in the second half, but we defended extremely well.”

After the first 10 minutes, the Rapids turned the game into a physical battle. At halftime, Colorado had 10 fouls to Seattle’s two, which disrupted the game’s rhythm enough to prevent the Sounders from scoring again.

The best chance after the first two goals came when Rapids goalkeeper Lauren Robertson picked a ball off Morgan’s foot when she was through on goal in the 42nd minute.

The second half progressed as the first half ended, with the Rapids content to break up play by fouling. The Sounders struggled to get any momentum in possession, as a Colorado player was always there to foul if Seattle strung a couple passes together.

“We’ve all played against physical teams before, so it wasn’t anything new, but we haven’t really had quite as physical of a game this season, and I think it was a good test for us,” Seattle defender Kate Deines said.

Colorado’s Katrine Korsgaard and Brooke Spence both picked up yellow cards midway through the half, and Samhia Simao was fortunate not to follow after she ran into Hope Solo in the 63rd minute.

Ode Fulutudilu did get a yellow card for running into Solo in the 85th minute, rounding out the Rapids’ yellow card count.

“I think it comes down to the ref taking control of the game,” Solo said of Colorado’s physical play. “I’m proud of our team for taking the emotions of the game and keeping our skill level at the top of our game.”

“You just have to figure out … what the ref’s going to let you get away with, and once you do that, it’s about protecting yourself,” she said. “Everyone knows they’ve got to step it up a little bit when the ref’s not calling much, and I think that they did that.”

The foul count finished 13-5, with the Rapids in the majority.

The Sounders managed to carve out some chances nonetheless, mostly through Morgan. Robertson stopped the national team forward on a breakaway in the 75th minute, and Morgan headed a ball just high three minutes later.

Cox provided a third Sounders’ goal with just three minutes to play. She sent a cross in from the left sideline, in front of the Seattle bench, which floated over Robertson’s head and into the far post in the 87th minute.

“Her service is on a dime every time she serves it, so the more we can get her serving balls into the box, the better we’re going to be,” French said of the left back’s overlapping runs, which were a constant feature against the Rapids on Monday. “The leadership, the experience, the composure on the ball and just another level of professionalism that she’ll bring to the team, that’ll help us and hopefully carry us through the rest of the season.”

The Sounders Women (4-0) and the Pali Blues both own the best records in the W-League Western Conference, but Seattle’s plus-seven goal difference puts the Sounders Women atop the table. Colorado (2-1-1) remains in fourth place after suffering its first loss.

Seattle played without Megan Rapinoe (charity function in New York) and Sydney Leroux (minor ankle sprain), who will join Solo and Morgan on the U.S. Olympic roster. The U.S. national team leaves on Tuesday for training camp in Sweden.

Seattle will be in action again Friday night – without those players – as it takes on the Vancouver Whitecaps Women (0-3-1) at Starfire Stadium at 10 p.m. ET. The Rapids Women host Pali (4-0) at 8 p.m. ET on Friday at Dick’s Sporting Goods Park.

— Monday was Hope Solo’s first shutout as a Sounder. “It always feels good to get that zero,” she said. “It’s been a long time coming.”

Heading back into national team camp this week, Solo said the experience of playing in Seattle was a major help for her decision-making.

“It’s all about decision-making, and you don’t get that in training, day in and day out,” she said. “When you play with your country, there’s not a ton of games. It’s not like you’re playing from preseason to postseason…you travel the world. You train a lot. You have a lot of training camps, but games are really when you can put your mark on what you want to do.”

— Stephanie Cox said she was disappointed not to be on the U.S. roster for the Olympic Games, but she is happy to be able to play with the Sounders all summer.

“It was heartbreaking to not make the roster, but I still love the game so much, so it’s great to be able to play with the Sounders and have an awesome venue like this to play at,” she said.

— French said her team is starting to build cohesiveness, despite national team players being in and out of the lineup.

“We haven’t had a lot of time, but we’ve had a lot of chalk talks and a lot of sitting down and walking through some things to make sure we’re all on the same page,” she said.

Click on this link for a full match photo gallery from Prost Amerika.