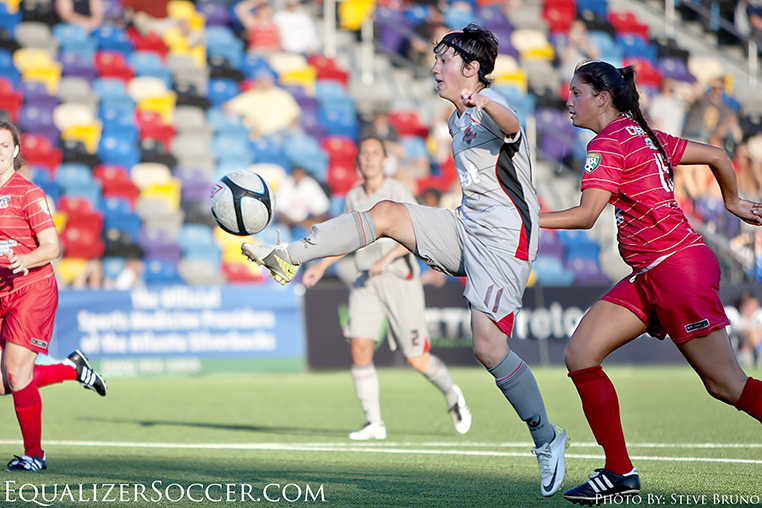 Tiffini Turpin of the Atlanta Silverbacks scores in a 2-1 win over Central SC Cobras on June 2. (Photo Copyright: Steve Bruno/EqualizerSoccer.com)

Saturday night’s repeat of the season-opening match between the Atlanta Silverbacks and visiting Central South Carolina Cobras ended much the same as the first: As another tightly-contested affair saw the home team walk away with a one-goal advantage in a 2-1 victory. Goals by Tiffini Turpin and Kristin Burton gave the ‘Backs just enough cushion to survive a heavy wave of late pressure from the visitors.

The match promised to be a difficult task as the Cobras gave Atlanta all they could handle in the first game, with the difference being a penalty kick for the Silverbacks. After the contest, coach Chris Adams praised the expansion team’s physicality and compact defense, knowing that his team would have much to work on before tonight’s rematch.

One difference for the Silverbacks this evening was a return to action for Alexa Newfield. The one-woman offensive wrecking crew, back to fitness following surgery this spring for a torn meniscus, featured in a starting lineup that was otherwise unchanged from the previous night’s 7-0 hammering of Jacksonville. Electing to keep her running to a minimum, though, Adams started Newfield at center forward and dropped Libby Guess back to attacking mid with the industrious Stacey Balaam the odd woman out in a stacked offense.

In the two previous games, Atlanta went after their opponents from the first kick without hesitation, creating half-chances less than a minute into each contest. In an unexpected turn of events, though, the Cobras were the ones taking it to the Silverbacks with the home team unable to get out of their defensive half for much of the first ten minutes.

“Last time with them sitting in on us, we anticipated that they would sit in again,” Adams said after the game, “and they came out and pressed us from the get-go. (They) played a 4-3-3 and got numbers forward and tried to just catch us off guard. Truthfully, with it being the second night of a back-to-back, it worked.”

Unable to capitalize on their early possession, though, South Carolina eventually ceded control of the midfield to the Silverbacks.

As the team gained momentum, Adams elected to sub Newfield out shortly before the 30 minute mark, moving Guess back to the top and bringing Balaam back to her familiar attacking midfield position. Adams says his plan mainly was to get a taste of game speed for Newfield, but didn’t expect to use her for the full 90 minutes. Although the SEC scoring leader brought her usual bag of tricks to harass the Cobras’ defense, the team really seemed to settle down and sustain the pressure once Balaam came in.

One thing the Cobras learned from their first game against the Silverbacks: You can throw everything you’ve got in front of her, but Tiffini Turpin will eventually find a crack in your defense. Turpin’s run through the center of the box in the first game set up the lone goal in the season opener and she made another slicing run through the heart of the Cobra defense to net the first goal Saturday night.

In the 34th minute, the Silverbacks earned a corner, which was emphatically rejected by the Carolina defense before the service entered the box. The ball was never fully clear of danger, though, and Turpin found a seam through the defense as they pushed out and reorganized. Left back Nikki Hill served a ball up and over the defense as Turpin broke into the box alongside a defender.

“I blocked the girl out, let it bounce and just one-touched it over the keeper,” Turpin said of her deadlock-breaking goal. “I glanced back and kinda saw that she was a little bit out,” she continued, adding with a laugh, “I was hoping for the best!”

Turpin’s goal was her third of the season while Hill’s assist moved her into a tie for second in the league with three from her outside-back position.

The Silverbacks continued building on their momentum coming out in the second half with several early chances and another breakthrough in the 50th minute off a counter-attack, ironically, from a Cobras’ counter-attack.

A breakaway play allowed Guess to find Kristin Burton, who drove around the left side of the 18-yard-box to open her angle on the goal, firing a devastating shot past advancing goalkeeper Christina Reuter.

With a goal for Burton and an assist for Guess on the play, both have moved into the Top 10 in the W-League points leaders’ table with 8 and 7 points, respectively. Burton’s goal also ties her with fellow forwards Turpin and Guess for the team lead at three.

Adams saw the game as a one-up from each team, with both competitors building on what they saw in their first meeting. By getting the all-important second goal off Burton’s clinical finish, he felt the Silverbacks showed they could adapt and progress beyond their opponent.

“They do a good job in trying to disrupt what you want to do,” Adams said of the Cobras. “They’ve seen us a few times now and so they know what we like to do. This is us being able to be one step ahead of things and have the next dimension ready.”

The goal was a fortuitous one as Central South Carolina refused to die off, playing a gritty, aggressive style, which never allowed the Silverbacks an easy touch on the ball.

“They definitely put in a lot of effort,” Turpin said of their opponents. “They don’t give up. If we let down, they take advantage of that.”

As the second half wore on, the Silverbacks tried desperately to find another goal. Eventually, though, the Cobras moved the momentum back toward their end of the pitch.

In the 80th minute, a long diagonal serve from the left side of the park by midfielder Taylor Parker found forward Claire Joyce just to the right of the goal. Joyce completed the zigzag play by firing just inside the opposite corner of Ashley Baker’s goal, giving the Cobras a deserved reward for a hard-fought match and ending the Silverbacks’ streak of goalless minutes at 350.

With both teams spurred into action by the late goal, the final 10 minutes were a tense, end-to-end affair as the Cobras broke out some flip-throws to put additional pressure on the Silverbacks’ box. Down on the other end, Atlanta kept Reuter busy with a multitude of chances, but the only dent they could put in the scoreboard was Rebecca Nolin’s thunderous long-range effort which, quite literally, dented the scoreboard as it whistled high over the goal.

The Silverbacks’ defense held tight, though, in spite of the spirited attack. Center backs Ronda Brooks and Bailey Powell seemed to be in the right place at the right time whenever a ball came near the center of the box. Brooks says it took a team effort in the back to keep the lead intact.

“In the back, we’re pretty comfortable with each other and we just use a lot of communication, so we just communicated a lot more towards the end of the game,” Brooks said, adding that, although it was a little disappointing not to get the clean sheet, the win takes precedence over the lone defensive lapse.

Pleased overall with the back-four’s performance, Adams says he and his defense will take an important lesson away from their second match against the Cobras.

“The one thing I think we learned: We let a few too many balls bounce,” Adams said. “And when you let a ball bounce, too many things can happen.”

The victory places the reigning W-League champions at the top of the Southeastern Division on goal difference, albeit temporarily as northern rivals Charlotte Lady Eagles have three away games in the next week before the Silverbacks get another kick of the ball.

Barring a slip-up in their next game on Sunday, the division would be set for a top-of-the-table battle between the two perennial division contenders on June 16th as Atlanta will travel up I-85 to face Charlotte. The team isn’t ready to look any further than next week’s opponent, though, as Sunday’s road fixture against FC Jax Destroyers will be their first match outside the friendly confines of Silverbacks Park.

“Psychologically, after beating them 7-0, it (would be) easy to take them lightly,” Adams said. “It’s our first road test, so (I’m) anxious to see how we react to that type of adversity.”

Impeccable road form helped the team win their first W-League Championship last season and it will be key this year as only two the team’s remaining eight games are at home.

Check out the full photo album from the game on our Facebook page.