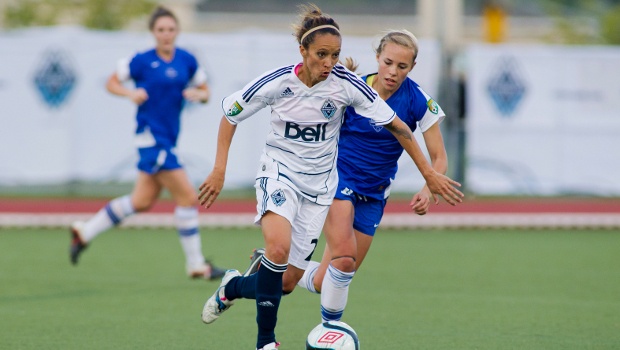 CHILLIWACK, B.C. – The show must go on no matter the circumstances of the visiting teams travel plans…. and that’s exactly what happened in Chilliwack on Friday night at Exhibition Stadium. The Colorado Rapids Women showed up extremely late and kickoff had to be pushed back from 7 p.m. PT to 7:53pm PT.

The Vancouver Whitecaps Women struck first in the opening half but the Rapids tied the game in the second half earning a 1-1 draw for both teams before a crowd of 1,005 fans. Vancouver falls to 0-3-1 on the season with the draw, while the Rapids Women remain unbeaten at 1-0-1.

The Colorado Rapids flew in to Seattle’s Sea-Tac Airport at 2 p.m. PT and then drove all the way to Chilliwack’s Exhibition Stadium. Every Pacific Northwest traveler knows that travel between Vancouver, and Seattle takes about three hours-plus depending on the border wait.

Apparently nobody told Colorado’s travel coordinator because it’s simply unacceptable to be late for a semi-professional USL W-League game. A similar problem also occurred on Thursday in the WPSL match between the Philadelphia Fever and the New York Fury.

As expected the Vancouver Whitecaps controlled the play and pace of the game for the opening 25 minutes while the visitors adjusted to their busy travel day. The Whitecaps didn’t create many scoring opportunities in the first half but they did capitalize on a penalty kick awarded to them in the 24th minute. Forward Marissa Mykines was tripped inside the box by Rapids defender Kelsey Neal, who was given a yellow card. Mele French stepped up and made no mistake by scoring low inside the far post on Rapids goalie Lauren Robertson. French scored the first home goal of the season for the Whitecaps Women and talked about her penalty spot strategy after the game.

French, who was the best player on the pitch for both teams, also talked about her team’s overall performance and what she expects next for the Whitecaps.

“We’re tasting it and we’ve got to continue to be patient,” French said. “We didn’t lose tonight so we’ve got to stay positive about it. We know we can do more which is why we’re not as happy as we should be. You can look forward to a better game next game.”

After the Whitecaps goal the Rapids seemed to get their legs under them after their long travel day. Colorado controlled more of the ball and nearly tied it up on a free kick in the 27th minute. Brazilian forward Samhia Simao fired a shot just under the bar that was saved with some difficulty by Whitecaps goalkeeper Gurveen Clair. Clair made her third consecutive start for the Whitecaps while starting goalkeeper Justine Bernier recovers from a quad injury. The Whitecaps went into halftime leading the game 1-0.

Rain that had been falling slightly in the first half started to fall heavily in the second half and players from both teams were slipping and falling quite a bit. Simao stayed on her feet while having her jersey pulled by Whitecaps defender Jennifer Jeffers just outside the box. Jeffers was issued a yellow card, and the Rapids took full advantage of their free kick to tie the game. Erin Gunther curled a shot low and to the right of Clair into the net. Clair wasn’t able to react in time to make the save.

Whitecaps midfielder Mary Kate McLaughlin collided with Rapids goalkeeper Lauren Robertson in the 75th minute and was taken off the field under her own strength after being tended to be a team trainer. McLaughlin slid under Robertson and appeared to receive a knock to the head while going under the Rapids goalie. Janie Frazao replaced McLaughlin for the final 15 minutes.

The Whitecaps created more chances than the Rapids after the equalizing goal but nobody could break the stalemate. Whitecaps midfielders Demi Stokes fired just over the bar, and French had her shot from in close turned aside by Lauren Robertson. Paige Adams had a great chance to be the hero for the Whitecaps in the 88th minute but she lost her balance on the wet grass and had her shot go wide of the Colorado net.

The Whitecaps were the better team for most of the game and deserved to take all 3 points from the Rapids. The wet grass may have interrupted their attack but their inability to score goals at home is what cost them a victory. The Whitecaps Women have scored one goal in three home games this season and no matter who your ‘keeper is, you’re not going to win many games with that type of ratio. The Whitecaps are making progress but it’s sure taking a while to get going.

Whitecaps coach Jesse Symons was positive after the match, despite his team remaining winless on the season.

“The players really came to fight tonight and did a great job,” he said. “They really started to push through and we were getting numbers forward and we were keeping the ball well. There was good tempo to the game and we’re just going to keep looking to increase the tempo and keep building the confidence of our attacking players to get around goal more.”

Notes: There was no update on the condition of Mary Kate McLaughlin following the game. The Whitecaps will play their next game on Friday, June 8, against the Seattle Sounders at Starfire Sports Complex in Tukwila, Wash. at 7:30 p.m. PT.