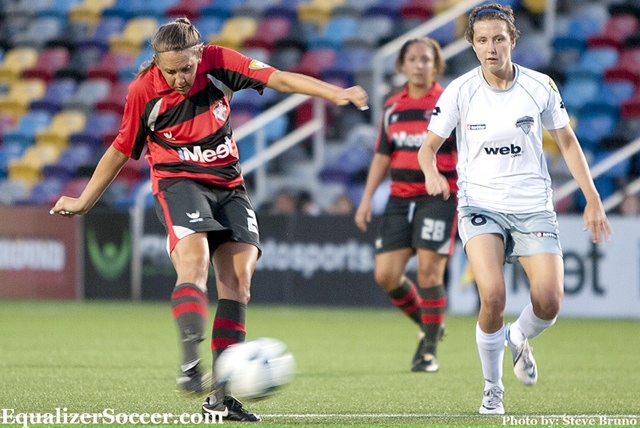 Nicole Locandro scored her second of the night on this powerful shot from outside the box. (Photo Copyright: Steve Bruno)

The word. “destroy,” was fitting on Friday evening. The Atlanta Silverbacks handed visiting FC Jax Destroyers a comprehensive 7-0 beating at Silverbacks Park. A first-half brace from Libby Guess put the team up 5-0 at halftime while Nicole Locandro added two of her own in the second.

That lineup produced a 4-0 result and Adams kept the same structure this week with Pollock still unable to play. The Simian Nation heaved a collective sigh of relief as forward Tiffini Turpin returned to the lineup following a minor injury in the previous week’s match which also caused her early subsitution. Available this week and starting was center back Ronda Brooks, who returned to captain the side from the backfield.

FC Jax came out in a 4-3-3 as well, indicating a free-flowing, attacking game was in the cards, but it was a slalom-like downhill run for the team in red as soon as the introductory strains of “Welcome to the Jungle” faded.

In a mirror reflection of last week’s game against Tampa, Atlanta came out with guns a-blazin’, getting into the Destroyers’ 18-yard-box in under a minute. As Turpin and Burton hammered the flanks, both Atlanta outside backs were able to push into the attacking third, often times completely unmarked.

Forward Libby Guess and Balaam again harassed all through the center of the attack, creating numerous chances. So great was the offensive pressure that holding mids Locandro and Nolin pushed up well into the attacking third, keeping the visitors pinned in with no hope of escape. With essentially eight players on offense, the Silverbacks came at the Destroyers from every direction like a swarm of angry bees.

In the 11th minute, the dam finally burst as Libby Guess received a feed from Burton near the edge of the penalty box which she took in coolly and slotted past ‘keeper Erin Moseley.

In the season opener, Adams spoke of an inability to kill off the game following a first-half penalty which was their only goal. Those concerns now seem to be a thing of the past as the team has scored early goals in the last two games, then used that momentum to further build their attack. Looking back, the coach now sees another explanation for the scarcity of goals in the first match.

“In the beginning, truthfully, with only two weeks of training, I think we may be veteran-savvy enough to have paced ourselves just to try to ease into our fitness,” Adams saaid with a wry smile.

With a few games under its belt now, he feels the team is much more comfortable going full tilt and maintain their intensity throughout the game. The key, he says, is the wealth of talent on the field and on the bench.

“I just don’t think there’s anywhere that we don’t have depth… that’s the beauty of it,” says Adams. “Our depth kicks in, so you really don’t have to pace yourself because there’s someone quality behind you that can come in and do the same type job and I think our players know that.”

Another sustained period of pressure following the goal led to another opportunity ten minutes later as left back Nikki Hill made one of many threatening runs toward the end line, serving the ball into the box where holding mid Nolin was camped within yards of the goal mouth. Known for her aerial prowess, the shot was a virtual slam dunk for the captain, who rose up, swiveled and headed it in for her first goal of the season.

Turpin joined the goal-scoring parade after 35 minutes as she scored a close-range shot off a Silverbacks counter-attack. Guess picked up the charge after a punch-out from Ashley Baker at the other end. As Guess screamed up the right side, she found an unmarked Turpin breaking away toward the left side of goal, passing the ball to her for an easy tap to beat the ‘keeper from about 10 yards out.

With one Destroyer foot in the grave already, Guess gently eased the other foot in with a dangerous run into the area. The former UNC star served the ball in and set Kristin Burton up for a deft shot through a defender and the ‘keeper from close range. The goal was Burton’s second of the season as the new Silverback starter seems to be finding her feet in the attack.

“It’s been about two-and-a-half years since I played a seriously competitive game, so, for me, it’s really just shaking off the rust,” Burton, a three-time Peach Belt Conference Player of the Year, said of her integration into the potent offense. “I’ll take ‘em however I can get ‘em until I get a little bit of my touch back, but just thankful to be in the right place at the right time” she said of the goal she “dinked” in.

An adventurous left-flank run in stoppage time by d-mid-turned-winger Rebecca Nolin served up the fifth goal as she whipped in a fierce ball through the defense, finding Guess to complete her first-half brace and close out the half.

Three games in, Guess has been a revelation for the team with Adams heaping praise on the former Tar Heel’s decision-making and creativity in attack. Attacking mid Balaam also gives Guess a lot of credit for stepping in and taking up the role filled previously by Megan Tomlinson.

“Libby brings something special to the team,” Balaam said. “Megan was a huge loss for us, but Libby’s… a quality player and she’s got a great background. We’re really blessed to have her in the team. She’s a mature head, she’s experienced and she offers something special on the field for us.”

Coming out for the second half, Adams says he planned on subbing in several players, but still expected his team to keep the pressure on.

“The people that came off the bench obviously didn’t want the level to drop and, if anything, they needed to raise the level by having fresh legs.”

The Silverbacks stayed high up the pitch from the second half whistle and, with FC Jax players desperately stretching their legs at any down moment, more goals were clearly Atlanta’s for the taking.

Adams’ first sub came in the 55th minute as forward Tiffini Turpin came off in favor of the no-less-ferocious Nkese Udoh, whose intensity and physicality kept the heat on a fading Jax backfield.

At the stroke of the 60th minute, Nicole Locandro was found lurking at the edge of the 18 with malicious thoughts of a sixth goal on her mind. If you read my preseason primer, you know Locandro has a deadly-accurate strike from long distance.

FC Jax, however, weren’t ‘in the know’ on this one as a loose ball at the edge of the box fell to her howitzer-like right foot. The midfielder shot a blistering spear straight into the heart of the Destoyer net with such venom that, had the outstretched Moseley been able to get in its path, she likely would have come away with a cartoony, ball-shaped hole through her body.

Garcia, Roberts and Udoh all featured heavily in the attack and kept their feet on the throats of their opponents. A driving run into the box by Garcia after a break-away put her one-on-one with the ‘keeper gave the Silverbacks another goal-scoring opportunity as the ball pinged around the danger area. Still parked on her launch pad 20 yards out from goal, Locandro received the ball on a pass from left back Hill and unleashed another rocket on goal for her second of the night and Hill’s second assist. The goal was the cherry on top of the sprinkles on top of the frosting of a very big, sweet cake.

The Silverback defense shouldn’t go un-praised in this offensive pummeling as center backs Bailey Powell and Ronda Brooks were essentially a two-woman brick wall in the back, snuffing out virtually any attack FC Jax could muster before getting to Baker, who likely could’ve run some errands during the 90 minute spree.

It’s telling that Jacksonville’s most dangerous opportunity came in the 89th minute as a shot at goal beat Baker, but bounced off the frame before being cleared out of danger by the Silverbacks’ defense. The team kept its third clean sheet in as many games, allowing only four shots for the Floridians in comparison to 28 by the home team.

A 2012 Silverbacks team regaining their championship form is a frightening enough prospect for the league. Even more terrifying, Adams has yet to introduce dynamic midfielder Alexa Newfield into a lineup which becomes more prolific with each game. Next up, the team has a 24-hour turnaround as they welcome Central South Carolina Cobras back for a return match at Silverbacks Park. The team will undoubtedly use it as a measuring stick against their lukewarm season opener in which the compact, stingy Cobras defense held the team to one goal. With the attack now firing on all cylinders and Newfield potentially ready to play, the neighbors to the North may find it much more difficult to fend off the irresistible force of the Silverback attack in the rematch.