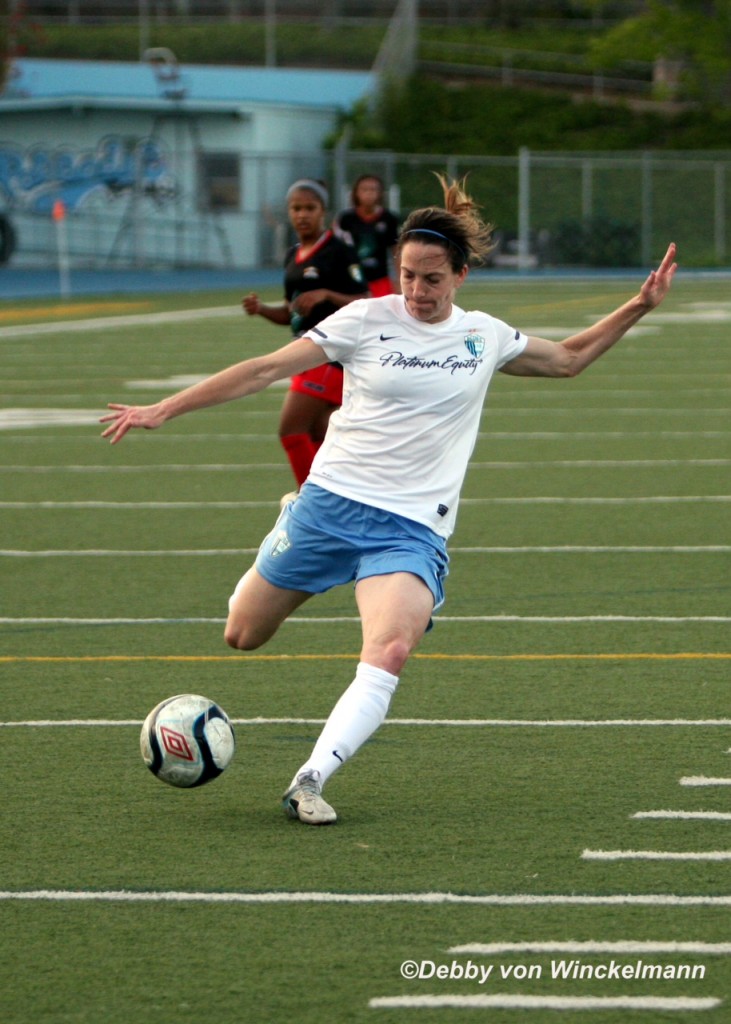 The Pali Blues won their home opener on Wednesday night, defeating the LA Strikers 2-1 at Palisades High School, for their third straight win.

With the victory, Pali improves to 3-0 and sits at the top of the Western Conference standings, while the Strikers fall to the bottom of the standings at 0-3.

But, the W-League’s Western Conference has always been formidable and this match certainly didn’t look like a case of the conference leader blowing out the last place team. Instead, it looked like a fairly evenly matched, hard fought battle.

“I thought the Strikers played a really tough game tonight,” said Pali Blues head coach Charlie Naimo. “They were awesome and, basically, poor finishing left the door open for them to find their game.”

The Strikers suffered a setback in the 10th minute of the game when goalkeeper Nicoline Jorgeusen collided with teammate Alex Quincy, creating a bloody mess that stopped play for several minutes. Both players had to be replaced on the field and Quincy definitely got the worst of it, retrieving one of her teeth from the turf before going to the hospital for stitches in her lip.

The action restarted slowly, but picked up when Pali midfielder Nikki Washington scored in the 30th minute to give the Blues a 1-0 lead. Washington and teammate Liz Bogus led the Pali offense with three shots each.

A shot from Bogus in the 41st minute bounced off the post and into the penalty area where Striker defender Autumn Altamarino was called for a hand ball. Bogus converted the penalty kick to put Pali up 2-0.

Pali outshot the Strikers 15-8, with 10 of their shots coming in the first half of the match.

While the first half belonged to Pali, it was the Strikers taking control in the second half, continuously high-pressing the Blues and outworking them.

Strikers forward Samantha Johnson was relentless in her attack and her strike from the right side in the 57th minute closed the gap to 2-1.

Luckily for Pali, they had Bogus, who seemed to be everywhere, chasing down every ball.

Naimo, who is long familiar with Bogus and her style of play, had high praise for his midfielder.

“Liz Bogus is the man of the match,” Naimo said. “I think this is one of the toughest games I’ve ever seen her play. She was clean on the ball, she got the goal, she created things for us.”

Strikers head coach Demian Brown said he would have liked to see his team find their rhythm earlier in the game.

“We played much better in the second half, had better ideas,” Brown said. “I felt we were able to put Pali on their heels.”

The Strikers are still tweaking their starting lineup and Brown said the team was still trying to gel and figure out where everyone fits in.

“Obviously 0-3 isn’t the way we want to start this season, but I feel we’ve played the best two teams,” Brown said. “That said, I’m looking forward and I’m excited about the future of the team.”

Naimo was happy to get the win and also expressed optimism for the Strikers’ future.

“They get the first goal of the second half and the next thing you know, we’re fighting for our lives to hold on here,” Naimo said. “So I credit them for a great performance. If that’s how they bring it, they’re going to win games in our conference, for sure.”