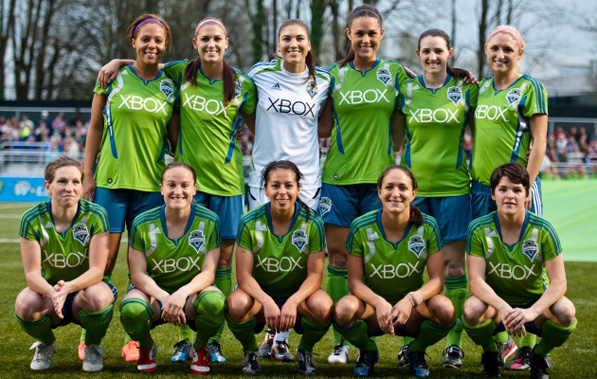 COQUITLAM, B.C. – The Vancouver Whitecaps Women, who had yet to record a victory this season entering Sunday, fell to 0-3 after a 2-0 loss to the Seattle Sounders in front of 1,465 fans at Percy Perry Stadium. The match was the season opener for the Sounders, Vancouver’s Cascadia rivals.

The Whitecaps looked to be a lock to secure three points in the early going with all their scoring opportunities. Whitecaps midfielders Demi Stokes, and forward Jenna Richardson had some great chemistry on display in the opening 45 minutes. Stokes sprinted up the field and fed Richardson the ball only to have her shot sail just over the Sounders’ net in the 17th minute. In the 33rd minute Richardson got behind the Sounders back four and found herself in a remarkable scoring position. A Sounders back pass went through the legs of a shocked Kate Deines right to Richardson. Despite all the time and space Richardson had, her shot hit the side of the net. The speed of Richardson and Stokes created problems for the sloppy looking Sounders but nothing resulted in the Whitecaps scoring their first home goal of the season.

Stokes admitted the Whitecaps failed to take advantage of their opportunities

“The first half we played well and we took it to them and I feel like the second half if we had of come out harder,” she said. “I feel like we just let them back in it. We didn’t take our chances when we should have.”

Stokes and the rest of her teammates are looking forward to their next game on Friday at home against the Colorado Rapids Women.

“It’s frustrating obviously we didn’t get the result we need but we just need to keep working together as a team and it’s going to come,” Stokes said. “We are really going to go for it this weekend and hopefully Friday gives us a result.”

Seattle Sounders midfielder and Mexican international Veronica Perez was the most dangerous looking Sounders player throughout the game. Perez fired a blistering shot on goal in the 43rd minute and Whitecaps backup goalie Gurveen Clair made a fantastic save to keep the game scoreless heading to halftime.

Sounders coach Michelle French must have given quite the pep talk during halftime because the Sounders reversed the momentum and run of play completely in the second half. It didn’t take long for Seattle to score the opening goal after the break. In the 47th minute Sounders defender Victoria Frederick sent in a cross after a corner and the ball went off a head-first diving Megan Manthey and into the net. Both Manthey and Lyndsey Patterson went for the ball and Seattle got that lucky bounce the Whitecaps couldn’t find in the first half. Whitecaps goalie Gurveen Clair mis-judged the ball and had no chance to recover on the play.

The Whitecaps went looking for the equalizer in the 56th minute, when Demi Stokes sent a through ball up to forward Mele French who sprinted down the left flank and fired a terrific shot on goal. Sounders goalie Katie Hultin made a diving catch to keep her team in the good. After that both teams played tentatively hoping not to give up the crucial “next goal”.

Veronica Perez who only needs one scoring opportunity to score did just that by scoring off a surprising shot from 36 yards out in the 81st minute. Perez’s shot seemed to catch Clair off guard in net. The ball bounced and took a funny spin in front of Clair before going off her fingertips and into the side meshing of the net.

Vancouver Whitecaps and Canadian Women’s National team defender Shannon Woeller had a great game anchoring the back line for the Whitecaps. Woeller’s experience, proved to have a calming effect on the defensive side of the ball. Woeller played her first game of the season for the Whitecaps and talked about the positives after a disappointing loss.

“I think we created a lot especially in the second half,” she said. “I think we just need to be a little bit more calm and I think the finishing will come. Sometimes it takes a little while before it gets going.”

The Whitecaps played their best half of the season in the first half but their inability to find the back of the net cost them three points against the Sounders. Seattle was missing Hope Solo, Megan Rapinoe, Alex Morgan, and Sydney Leroux who were in Chester, Penn. with the U.S. national team. Clearly the Sounders Women are a favorite to win the USL W-League Western Conference when and if they have their full roster at their disposal this season.

Notes: The Whitecaps will play their next game on Friday, June 1, against the Colorado Rapids Women at Exhibition Stadium in Chilliwack at 10 p.m. ET. The Sounders host the Colorado Rush on Thursday at 10 p.m. ET at the Starfire Sports Complex. The Sounders will host the Whitecaps in a rematch on Friday, June 8, at the Starfire Sports Complex.