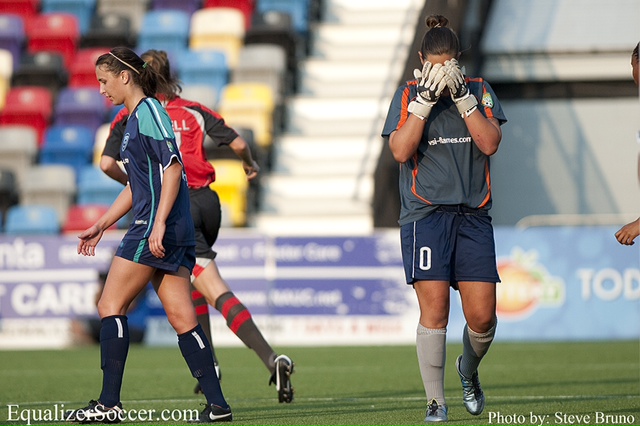 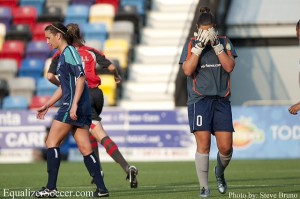 It was just one of those days for Tampa Flames goalkeeper Jennifer Manis (right). (Photo Copyright: Steve Bruno)

Friday night brought an improved performance from the Atlanta Silverbacks in a 4-0 defeat of visitors VSI Tampa Flames. For the second week in a row, Atlanta welcomed an expansion team into Silverbacks Park and sent them packing with a goose egg. The team took the field Friday night looking to build on the previous week’s decent performance, which saw a number of chances yield just one goal off a PK. Coach Chris Adams highlighted a lack of finishing in the attacking third as a specific area of improvement the team took from that game into this week’s practices.

The Silverbacks were still unable to field their first-choice starting XI with captain and center back Ronda Brooks unavailable while midfielder Alexa Newfield remains wrapped in the proverbial cotton as she returns to full strength.

Featuring a variation on their multi-pronged attack, Atlanta came out with Tiffini Turpin on the right flank, Libby Guess in the center and Kristin Burton, getting her first start of the season, on the left wing. The midfield remained the same with Stacey Balaam and Jamie Pollock on attack while Rebecca Nolin called the shots just in front of the back four. With Brooks out, Adams utilized Leilani Huntley, last season’s starting center back, to fill her boots.  The rest of the defense remained unchanged with Kansas Bayly on the right, Bailey Powell beside Huntley in the center, Nikki Hill out to the left and Ashley Baker in the net.

Atlanta came out firing as every player from Nolin upwards took cracks at goal early on. Picking up where they left off from last week, the fluid front trio switched positions often, pouring the pressure on from every angle. Balaam continued a stellar performance in the midfield, spraying balls through to the front three as well as peppering the goal mouth from long range.

Less than six minutes into the match, though, midfielder Jamie Pollock went down with an injury and was subbed out for Nicole Locandro, back to full fitness after an illness kept her off the team last week.

Pollock’s injury did little to slow the offense, however, and ten minutes into the first half, the front three were already mixing it up with Turpin and Burton swapping sides. The decision was one the players made on their own to exploit an opportunity they saw in the defense.

“They switched it originally,” Adams said of the reversal. “They saw something they liked and we let it be. I trust their judgment.”

With Turpin on the left now, the Silverbacks presented a more balanced offense than last week’s predominantly right-and-center attack. Locandro’s addition to the lineup allowed her to sit back with Nolin while outside backs Hill and Bayly pushed up behind the forwards, keeping the intensity of attack high from the flanks.

As the pressure mounted, the Silverbacks got their first goal of the night off a set piece in the 21st minute. Balaam lofted a corner kick into the box which Flames goalkeeper Jennifer Manis found  difficult to handle, dropping the ball in front of a delighted Bailey Powell who pushed it in for her first goal of the season.

Just after the half-hour mark, Adams made another unplanned substitution as Turpin sustained a minor injury and Chloe Roberts, last week’s starting left wing, came on to rejoin the front line. The half ended with the Silverbacks maintaining pressure and possession, but no real attacking chances outside of a few hopeful long-range shots.

Adams said the team seemed to relax following the goal, another bad habit from the previous week.

“We… played very smart,” Adams said of his team’s performance in the first 45. “I just think we’ve got to do a bit more keeping our foot to the pedal and putting teams away. We put them under a tremendous amount of pressure in the first half and then it’s like, once we got that first goal, we kind of let them off the hook.”

Looking to put the Flames to the sword, Adams made another tactical switch to his front three to further exploit Tampa’s defensive match-ups, moving Chloe Roberts into the center with Burton and Guess out wide. The team came out aggressively, scoring within minutes of kickoff after another defensive error in front of the Flames’ net allowed Kristin Burton to squeeze a boot between the entire back line and pop a shot past the keeper.

Last week’s offensive spark plug, Libby Guess, got her name on the score sheet as well when a perfectly-timed pass from Balaam in the 57th minute put Guess beyond the lone defender and in a one-on-one with the keeper near the edge of the box. As Manis committed to the right, Guess pushed the ball the other way, hopping the keeper in the process and coolly slotting the ball into an open net.

“We knew they were tired at half time, so we wanted to run ’em,” the former Tar Heel said of their strategy coming out of the locker room, adding that she was relieved to get her first of the season.

“You kind of take for granted scoring goals when you’ve been out a while,” said Guess, who returned to the team following surgery for a knee injury which sidelined her for 2011. “I’ve been a little rusty, so to get that under my belt… it’s really good.”

Nkese Udoh continued her role as a tired defender’s worst nightmare, coming on just after the 60-minute mark for Kristin Burton and bringing another powerful weapon to the attack.

In the 75th minute, a trip on Chloe Roberts by Flames defender Cassie Barbaresi inside the box gave Udoh a chance to get a bite of the scoring apple, smashing the ensuing penalty kick into the back of the net with authority for the fourth goal of the evening.

The defense again proved virtually airtight, ensuring Baker saw little action except for occasional set pieces and long distance strikes, while allowing Tampa no real sustained periods of pressure throughout the game. Adams singled out his outside backs, Hill and Bayly, for their strong defending and increasing contributions to the attack.

With Huntley having a solid game in her first start of the season and backup goalkeeper Connie Organ getting almost half an hour of action as a sub, Adams says the variety of players seeing meaningful minutes this early in the season is proving beneficial for the team’s chemistry no matter who is on the pitch.

Adams is also enjoying the performance of his continually revolving front line options, saying, “From an opponent’s standpoint, the scouting report would be a bit tough. We can come at you with a lot of different players and a lot of different ways… that’s the beauty of this very talented group.”

Adams will likely need to throw a lot of different players onto the pitch next week as FC Jax Destroyers and Central South Carolina Cobras come to Atlanta Friday and Saturday, respectively, for the team’s first back-to-back match-ups of the season.