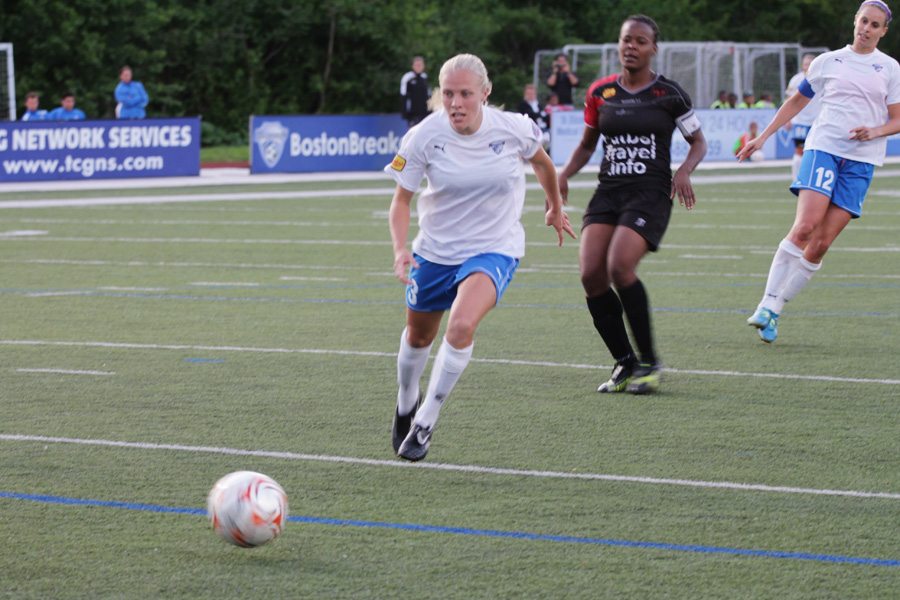 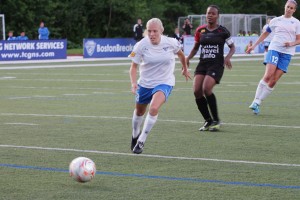 Tameka Butt scored for the Boston Breakers on Wednesday in a 2-1 win over the New York Fury. (Photo Copyright: Meg Linehan)

HEMPSTEAD, N.Y. — The Boston Breakers took early command of the WPSL Elite League table with a 2-1 victory over the New York Fury to spoil the first game at Hofstra University for Paul Riley’s squad.  The Breakers rode first half goals from Temeka Butt and Katie Schoepfer to improve to 3-0-0 (9 points) while the Fury dropped to 2-1-0 (6 points) even as Merrit Mathias bagged her league-leading fourth goal of the campaign.

“It was exciting to get out here and play against another high-level, organized team,” Breakers coach Lisa Cole said.  “I was pleased with the way we started, coming out energized.”

The Breakers’ Australian duo of Butt and Kyah Simon were less dynamic than five days prior against FC Indiana but still managed to contribute on both goals before Butt left midway through the first half with a right leg injury.  Butt connected in the 10th minute off a sparkling cross by Courtney Jones who overlapped from her right back spot.  Bianca D’Agostino started the play by collecting a loose ball in midfield and making a quick, smart pass to Jones.

“You could probably give it a double assist,” Cole said.

Nine minutes later the Breakers collapsed around Fury midfielder Brittany Taylor and wound up with numbers and a second goal.  Simon was on the passing end, feeding Schoepfer, who blasted a right-footed shot by a helpless Michelle Betos.

The remainder of the first half was mostly controlled by the Breakers, their only setback the injury to Butt, who was helped off without putting any weight on her right leg.

“Right now we’re not sure,” Cole said, adding that it does not appear to be a broken bone. A minor ankle sprain was initially suspected.

The only half-chances the Fury had in the opening half were a weak shot by Taylor, easily handled by Alice Binns; and a foray into the box by Meghan Lenczyk that was expertly cancelled out by Taryn Hemmings.

“We were absolutely dreadful,” Riley said.  “That’s the worst we’ve played so far.”

Riley did make some halftime adjustments that paid some dividends.  He moved Kia McNeill to run as a forward and dropped Brittany Taylor from the midfield onto the back line.  He also put both Tina and Gina DiMartino in midfield although Gina left before the end after spending some time clutching her hamstring area.

McNeil “isn’t comfortable up there,” according to her coach, but she did hit the crossbar in the opening minutes and later assisted on the Fury goal.  It was a 66th minute pass to the right side that found Mathias streaking in.  The new leading scorer in WPSL Elite League beat Binns to the back post.

Any thoughts the goal would energize the Fury to push harder for the equalizer were quickly erased when the rest of the match played out somewhat evenly.

“We stopped playing again,” Riley said.  “You’d think that the goal would have pushed us on to get going and the midfield looked like they had a grip on the game at that point, but we just played with no emotion, no commitment, no verve, no bite.  You can’t win games at this level with none of that stuff.”

Cole was happy with the win.

“We knew the second half was going to be a battle because Paul was going to make some adjustments,” she said.  “It was a good professional win holding onto (the lead.)”

Riley thought Breakers’ midfielder Leslie Osborne was the best player on the pitch and Cole has been pleased with the holding midfielder’s contributions through three games.

“I’ve been really pleased with how she’s played for us,” she said.  “She leads, she’s good in the air, she’s been strong and the things she’s been doing with the ball have been quick and decisive.  She’s been a key factor for us.”

The Breakers are headed back to Boston where they will host the Western New York Flash on Saturday night.  The Fury’s next game is at home May 31 against the Philadelphia Fever.