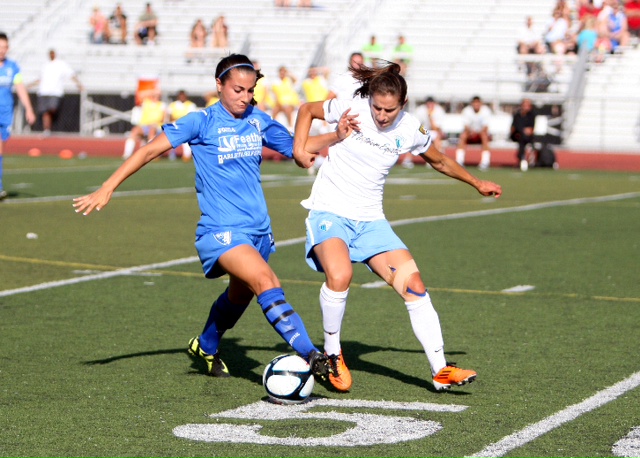 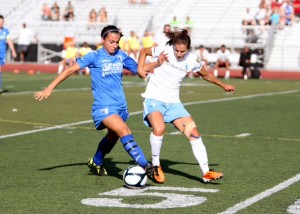 The last time the Pali Blues and the Santa Clarita Blue Heat played each other, the Western Conference regular season title was on the line and Blue Heat claimed it.

On Sunday night at Valencia High School, the stakes weren’t as high and both teams had a lot of new faces on the pitch, but that didn’t lessen the competition between the cross-town rivals. This time the Pali Blues prevailed, defeating the Blue Heat 2-0.

All of the new personnel definitely affected the play of the Blue Heat, according to their coach Charles Martinez.

“When you have a lot of new players, it’s kind of hard to put them together,” Martinez said. “We didn’t control the ball at all and we had a lot of miscommunication in the game that really affected us, especially in the first half.”

Ann Marie Tangorra put Pali on the scoreboard in the 36th minute, showing skill and speed as she took the ball up the right side, dribbling past several defenders and drawing out Blue Heat goalkeeper Cynthia Jacobo. The goalie was able to knock down the first shot by Tangorra, but couldn’t stop the forward’s second strike off the rebound.

Nikki Washington doubled Pali’s lead in the 51st minute, taking a shot from the right sideline, about 15 yards out, and putting it in the upper left corner.

The Pali Blues outshot the Blue Heat 24-11, with Pali midfielder Servet Unsular, a member of the Australian national team, leading all players with five shots. Liz Bogus, Washington, and Tangorra each took four shots for Pali.

Blue Heat forward Rachel Nuzzolese, a Wake Forest standout, was impressive in her attack, showing her ability to break through the defense. She finished with two shots. Teammate Laura Luis also showed good movement on the front line and had a couple of breaks to the goal, but didn’t record a shot in the game. Defender Taylor Ramirez led the Blue Heat with three shots.

There were opportunities for more goals, but there were some strong defensive efforts on both ends of the field.

Blue Heat defender Sydney Vermillion was solid on the backline, denying several shots and saving a probable goal in the 26th minute by Pali’s Sarah Huffman, who gathered the rebound of her own shot inside the box and sent it back, only to be blocked by Vermillion.

The Pali defense was successful at pulling the Blue Heat offsides seven times. Team captain Christie Shaner also made an early save for her team and goalie Anna Maria Picarelli recorded her second clean sheet with six saves.

Jacobo, who made seven saves for the Blue Heat, was happy with her team’s defensive effort and is optimistic about the season.

“I think this is going to be an amazing team,” Jacobo said. “We just need to click and once we do, we’re going to be unstoppable.”

You can expect both of these teams to get much better, as neither played at full strength.

Pali defender Sasha Andrews said the team is very well-rounded, has great camaraderie, and she believes this team can reclaim its championship trophy.

“It’s the recipe for a championship,” Andrews said. “It’s exciting, even going to practice-it’s phenomenal. It feels like I’m on my national team.”

With more players on the way, Naimo said he will be able to change up his lineup and throw some different looks into the season.

“We have a lot more upside than we’ve shown,” Naimo said. “I can only think that this team has a pretty bright season ahead of them.”