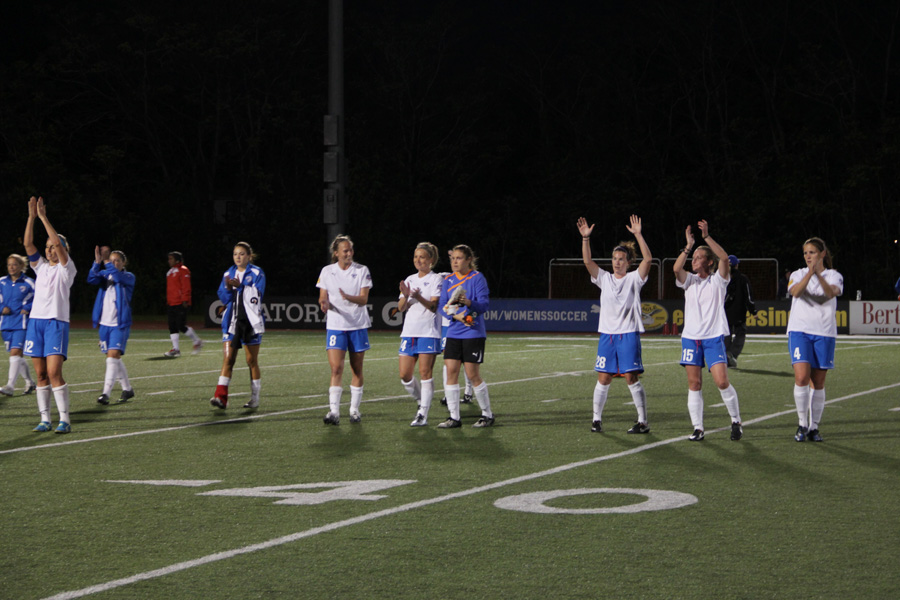 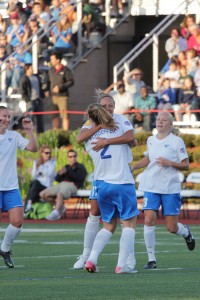 The Breakers celebrate one of their four goals from Friday's 4-1 win over FC Indiana. (Photo Copyright: Meg Linehan)

Two weeks into the experiment called WPSL Elite, the semi-pro league that now stands as the top of the heap in club soccer for women in the United States alongside the W-League, is already showing some growth and excitement.

To wit, Friday brought the official end to what we all knew was dead for some time, Women’s Professional Soccer. The second crack at a full-fledged pro league for women survived three seasons, the last two rocked by financial and legal disasters plus some desperation that led to the admission of magicJack. MagicJack ownership bought the Freedom and saved the league for a third season only to be the final nail in what was already a rapidly closing coffin.

As part of a statement WPSL Commissioner Jerry Zanelli said, “Even though it is a tremendous disappointment we see it as a huge opportunity to build a professional women’s soccer league in a very different way than ever before. Our ultimate goal is to create a professional league that will last.”

Zanelli went on to reiterate interest from groups looking to put teams in WPSL Elite in cities ranging from Miami to the Bay Area.

“The answer is to build from the ground up. That is how you build a league to last.”

The weekend matches highlighted fears that WPSL Elite would be lacking in parity, but also produced some interesting results as well as the league’s first signature moment.

Friday night, just hours after the announcement that WPS was history, FC Indiana was lucky to hold the Breakers to 4-1. They were disorganized in the back and badly outplayed for long stretches of the match.

“The speed of play is a bit different and the creativity on the ball,” said Breakers defender and former WPS and national team player Cat Whitehill. “You don’t have the Martas of the world going at you. But you have a lot of young players that can be seen. You can see in this league there is potential with a lot of players.”

One of those young players is Australian Kyah Simon. The 20-year-old made a splash on the world stage last summer when she scored both goals in Australia’s win over Norway that secured a berth in the knockout stage. She scored twice more Friday night, but also distinguished herself with a tireless work rate that was only halted when she was subbed out in the last minute.

“Her work rate is great,” Cole said. “She’s looking for the ball. (She’s) a young international player that wants to elevate her game and play against the best. I think she’ll get an opportunity to do that.”

The Breakers second win and first at home was played before a sellout crowd—really, all the seats were filled—at Dilboy Stadium in Somerville, MA.

Saturday night brought two intriguing contests. For the first time the schedule veered so that two of the larger scale teams squared off and two of the smaller clubs played as well. In Rochester, N.Y. the New York Fury delivered a 1-0 victory behind a Brittany Taylor goal and an 11-save night from Michelle Betos. It was the first salvo fired in the battle for league supremacy. It also sets up an intriguing home opener for the Fury on Wednesday against the Breakers. Both teams head into the match 2-0-0.

Meanwhile, East Longmeadow, MA—just outside Springfield—was the site of the most poignant play of the season so far. The host New England Mutiny was clinging to a 3-2 lead over amateur ASA Chesapeake Charge. With less than 10 minutes to play goalkeeper Sandra Gaul came out to play a ball near the top of the penalty area but was unable to gain possession. The ball was sent in towards the goal where Marissa Kresge ran onto it for what looked like an easy tap-in. Gaul spoiled the party by scrambling back and knocking it away at the last second.

“I thought we had it,” Charge coach Albert Oni said. “Everyone got a little bit over here. Their goalkeeper came up big and made great, great save, so hat’s off to her.”

Despite the Charge’s 0-2 record—already more losses than in 2011—Oni is thrilled with the club’s progress since joining the Elite League.

“It’s excellent,” he said. “I like challenges. I don’t like losing. I hate losing as (do) the players. We had a chance to stay in the other league and play for the title or come in here knowing that we would be a young team that has challenges. We all are looking forward to and invite the challenge.

Oni said he is treating every half of game play as a training session and using halftime as a method of making adjustments—something his club has done well in both matches so far.

The Mutiny reveled in the three points—their first three in WPSL Elite—but had little time to celebrate due to a scheduling quirk that saw them play the very next day against the league’s other amateur side, Philadelphia Fever. After a bus ride to Pennsylvania the Mutiny secured a 2-2 draw in what was the Fever’s first ever competitive match at any level.

-Mary-Frances Monroe started for the Breakers on Friday, her first game action of any kind since last summer. Monroe is coaching at the University of Albany and will be making the occasional commute to Beantown to play for and train with the Breakers. Monroe also played in WUSA and WPS.