The week that was in women’s soccer: May 22 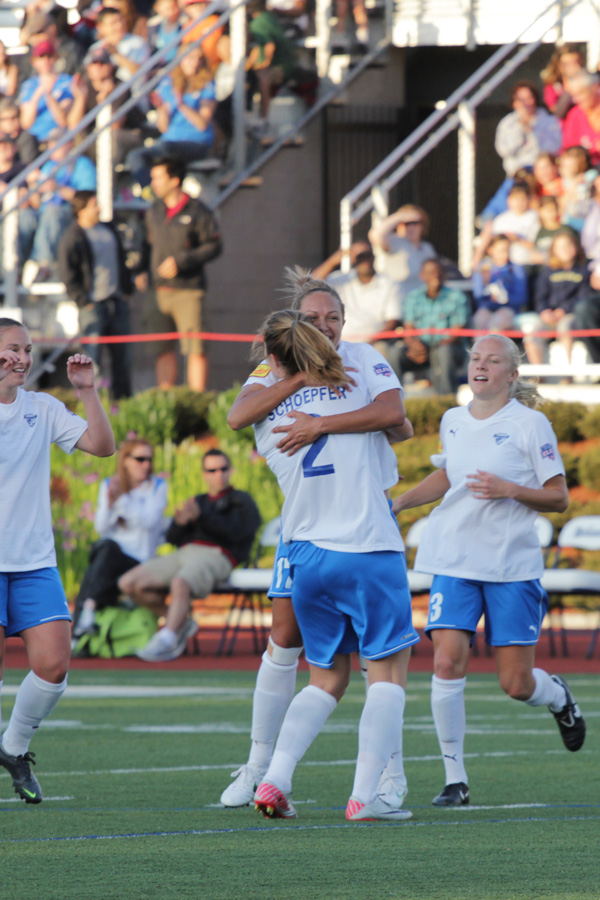 The biggest news of the week in women’s soccer comes from Munich, site of the UEFA Champions League final. Two days before the world dramatically watched Didier Drogba and Chelsea FC win the men’s title over Bayern Munich on penalty kicks, the Lyon women defeated 1. FFC Frankfurt 2-0 to earn their second-straight European crown. Nine of Lyon’s 11 starters in the match were French and Les Bleues have a serious shot at contending for an Olympic gold medal in London this summer. Former WPS midfielder Camille Abily hit a textbook volley to score Lyon’s second goal. MATCH HIGHLIGHTS [Video]

Equally important but far more predictable was Friday’s announcement by Women’s Professional Soccer (WPS) that the league has permanently folded and will not make a comeback. The news was imminent since the struggling league announced on January 30 that it would suspend the 2012 season. What 2013 will bring for a top level of women’s soccer is still anyone’s guess, but the USL W-League and WPSL Elite League both feel that they are the answer.

In W-League action on Friday, the Vancouver Whitecaps Women lost 2-0 to the Colorado Rush to remain winless. The Rush and Pali Blues are both atop the conference with 6 pts. and the Seattle Sounders Women are yet to play their first match. For a Whitecaps side that made the Final Four last season, 2012 already looks like it could be a disappointment. Only the top two Western Conference teams advance to the postseason.

While it will be tough for Sunday’s upcoming women’s Pacific Northwest derby to match the thrilling Cascadia Cup match-up from Saturday, the first meeting of the year between the Whitecaps Women and Sounders Women is a must-win for Vancouver. Seattle will be without its U.S. stars – including Alex Morgan and Hope Solo – who play China at PPL Park in Chester, Penn. on the same day, but make no mistake, this is a big rivalry on the women’s side, too.

In other MLS-women’s action, D.C. United Women prevailed 2-0 over the Virginia Beach Piranhas in the season opener at the Maryland SoccerPlex. Mikaela Howell scored both goals for the home team. Check out the full weekend of W-League scores here.

Former WPS teams Boston Breakers and Western New York Flash were in action over the weekend in the WPSL Elite League. Following Boston’s 4-1 home victory over FC Indiana on Friday, Breakers captain Leslie Osborne spoke about what needs to be done for women’s soccer to succeed in the United States. She said all governing bodies need come under one roof. [Match report and Osborne video]

The New York Fury (2-0-0, 6 pts.) stayed unbeaten and tied with Boston atop the WPSL Elite League after defeating Western New York 1-0 on Saturday. Brittany Taylor had the game’s lone tally in the 54th minute when she one-timed a corner kick played to her at the top of the 18-yard-box.

Travis Clark at Top Drawer Soccer points out that U.S. U-18 women’s forward McKenzie Meehan, who will play for Boston College next season, is scoring at an astounding rate. She has 44 goals through 20 games in the Elite Clubs National League (ECNL), the top girls league in the country. Clark also has a good look at where top college players are competing across the country this summer in the W-League and WPSL Elite League.

Finally, over in Germany, the Frauen-Bundesliga title race will come down to the final day this Monday with VfL Wolfsburg sitting one point behind Turbine Potsdam at the top of the table. Wolfsburg faces fifth-place Essen-Schönebeck, but there seems to be little hope with Potsdam facing last-place 1. FC Lok Leipzig. [Highlights from Sunday’s matches | Full table]