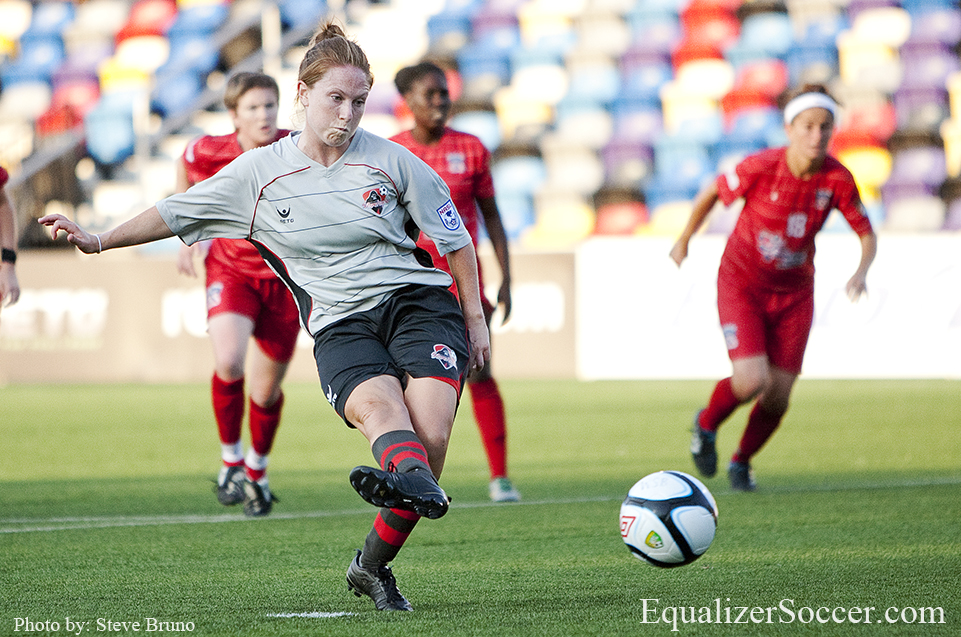 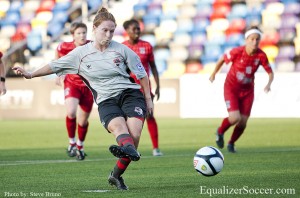 As dense rush-hour traffic clogged the arteries of the Atlanta highway system only a few hundred feet away, the defending W-League champion Silverbacks’ 2012 season lurched into first gear amongst the verdant treeline of Silverback Park. If 2011 taught the returning players anything, it was how to deal with adversity, so what better way to start 2012 than with a few monkey wrenches thrown in the team’s spokes?

Before reaching the park, head coach Chris Adams received two phone calls within an hour from players who wouldn’t be available due to illness. A prior decision to rest midfield spark plug Alexa Newfield meant his team would be looking a little thin on opening day.

Coming off a short two weeks of practice, even shorter for players who missed time while at school, and facing an unknown opponent in the newly-minted Central South Carolina Cobras, Adams would have to reshuffle his deck before the game and hope his team’s trademark resilience would win out in the end.

Taking the field in their usual 4-3-3, Ashley Baker tended goal while Bailey Powell, last season’s right back, returned to her more natural center position to pair with captain Ronda Brooks. Newcomers Nikki Hill and Kansas Bayly took up the left and right flanks respectively. The Atlanta midfield wouldn’t be the same without Rebecca Nolin barking directions from her deep-lying center position, as Jamie Pollock started to the left and Stacey Balaam, freed from last season’s tour of duty at left back, supported from the right. Libby Guess led the attack from the center with Tiffini Turpin wide right and Chloe Roberts wide left.

It took about ten minutes for the teams to settle in before the Silverbacks began to press as Libby Guess tested Central SC Cobras goalkeeper Christina Reuter with a few decent shots on goal. Throughout the half, Guess seemed the most likely to score with numerous shots from the perimeter of the 18-yard-box. With Pollock playing closer in toward the center and defender Nikki Hill playing a fairly conservative left back, Chloe Roberts seemed a little starved for attention out on the left wing in her debut.

Balaam, however, reveled in her return to the midfield, playing with the energy and enthusiasm of a 10-year-old released from the shackles of school for summer vacation. Her domination through the midfield along with Turpin’s menacing runs down the flanks proved more than a handful as they assaulted CSC’s left side for most of the half.

With 10 minutes until halftime and no closer to finding the key to the Cobras’ deep, compact defense, Turpin and Guess began switching positions, alternately hammering CSC right and center. Adams credited the athletic Cobras defenders for holding a well-organized line which proved difficult to expose for much of the game.

In the 40th minute, though, a knifing run in from the right flank by Turpin finally found a crack in the wall as she burst through the center of the 18-yard box.

“I was cutting in, the ball got played in, the defender missed it and I got a touch on it and got in behind her,” Turpin said. “The defender decided she didn’t want me to pass and she pulled my jersey, brought me down in the box.”

Defender Meghan Wetzel received a yellow card, one of three on the evening for Carolina, as the referee pointed to the spot and awarded the home side a PK. Just a spectator in the stands, the Silverbacks’ usual penalty-taker, Newfield, watched as Balaam stepped up and converted confidently for the game’s lone goal.

The half ended 1-0 with the Silverbacks finally rewarded for their persistent hammering of the Cobras’ defense.

The second half saw Atlanta try a variation on a theme as Adams tucked Guess back into an attacking mid position just behind Balaam who moved up to center forward. Guess’ presence around the outside of the box was active and threatening all evening. Adams attributes the former Tar Heel’s renewed personal commitment to her game as the key to her performance and feels she’s very close to a breakthrough with his club.

“Even though she didn’t finish, I was pleased with what she brought,” he said. “Keeping the ball, spraying balls all over the field, just doing a lot of things well.”

The fluid movement of Turpin, Guess and Balaam, all changing positions within the formation, meant a constant variety of weapons coming at the defense, something captain Rebecca Nolin sees as one of the strengths of the offense.

“We’ve got a lot of depth with what our forwards and attacking midfielders can do and where they can play,” Nolin said. “Switching it up is nice because we’ve got some players in there that are very creative on the ball and have great first touches so they can keep it, but we’ve also got a lot of speed up there, too, to where we can play it in behind at times.”

The Silverbacks’ defense held strong during a few sustained periods of South Carolina possession through the middle of the second half. Although she saw very few dangerous chances, Ashley Baker came up big in the 60th minute when a powerful Cobra strike to the upper-right corner required a thrilling effort from the England U23 keeper to parry it wide.

The whole defense played well as a unit to keep the shutout intact, but Adams was particularly impressed with his new right back.

“Nikki Hill had a very good match,” Adams said of the Canadian international. “I thought she was just very steady. She kept the ball. She got up and back a lot and was very dangerous.”

The Cobras’ spell of pressure waned in the final minutes and Guess, along with SIlverbacks’ super-sub forward Nkese Udoh, kept the attacking tempo high, forcing South Carolina back much further than they would have liked so late in a close game. As the intensity mounted, only a superb diving save from Reuter in the 88th minute kept the Cobras in the game. The final whistle blew with the visitors unable to mount a final assault on Baker’s goal.

It is probably not the resounding victory the Silverbacks would have preferred to ring in the new season, but they take the points and continue a string of unbeaten season openers going back to 2008. 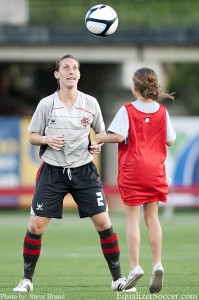 Earlier Friday, news of the final chapter of WPS’ tumultuous saga circulated through the women’s soccer community. Rebecca Nolin felt the impact particularly hard as a former player in the league with the Atlanta Beat.

“It’s very sad and very unfortunate because I was a massive fan,” she said. “It’s just such a shame for the youth, for the female youth game coming up.”

Nolin credits time in WPS with her own development as an athlete and considers her time with the Beat as a personal high mark for herself in the sport.

“I think 2010 was my best season ever. I learned a lot, I learned that I was able to play with a lot of top players.”

The silver lining is Nolin will again be able to match up against some top-level players.

“The W-League’s strengthened and I’ll take that, because that’s more competition for us.”

Turpin echoes the sentiment, saying she is looking forward to the possibility of squaring off against former WPS players in the W-League.

“I’m ecstatic,” she said. “I would love to play against some Olympians. I just love to keep going up in levels, it makes me play better.”

For now, though, the Silverbacks will concentrate on VSI Tampa Flames, another expansion team and the next one up on Atlanta’s lengthy home stand. Adams feels Tampa will likely bring many of the same challenges as Central South Carolina, giving the Silverbacks an opportunity to work on a few key areas of improvement they will take away from Friday’s game.

Atlanta hosts Tampa on Friday, May 25, at 7 p.m. at Silverbacks Park.