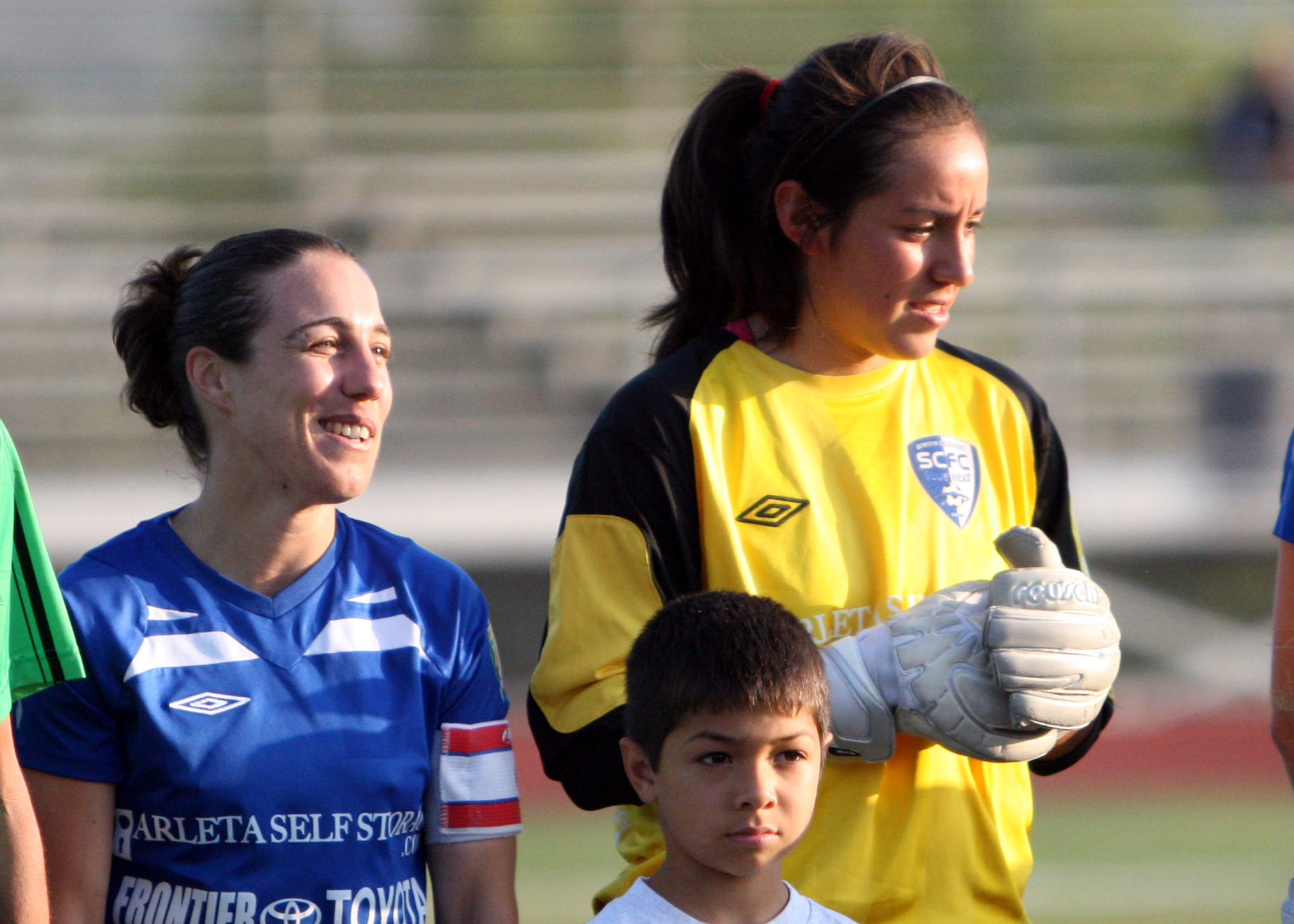 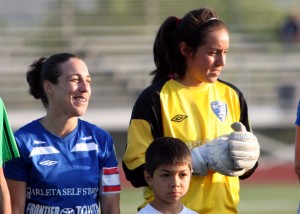 It didn’t take long for the Santa Clarita Blue Heat to make a name for itself in the USL W-League. The team won the Western Conference regular season title last season, in just their second year of existence.

This season the Blue Heat will defend their title with a good mix of new and returning players, along with a new head coach, Charles Martinez, who was an assistant coach with the team last year. Martinez played professionally in Ecuador with Deportivo Cuenca (1st Division) and has 20 years of coaching experience at the club and high school levels.

Martinez said the combination of returning and new players have given him a “very good unit” that is strong both offensively and defensively.

“I think we’re really balanced because line-by-line we’ve got the players that are going to be doing a great job,” Martinez said.

The Blue Heat returns key players in the 2011 Goalkeeper of the Year Cynthia Jacobo and  2011 W-League MVP finalist Edite Fernandes.

Jacobo is the goalkeeper at Cal State Northridge, where she was named the Big West Conference Goalkeeper of the Year and garnered All-Big West First Team honors. She led the W-League in saves with 85 and tied for second in league for wins (8) and shutouts (5). Jacobo was also named to the All-League Team and was a finalist for Rookie of the Year last season.

“If you have a good goalkeeper, you have a good chance of winning championships,” Martinez said. “Having Cynthia back gives the defense a lot of confidence and a lot of security. She’s an amazing player.”

Fernandes is a striker and the captain of the Portuguese national team, with more than 100 international appearances. She last played for Atletico Madrid before coming to play for Blue Heat last season. Fernandes was fourth in the W-League in 2011 for goals, points, and assists, and was named to the All-League Team.

Fernandes was injured at the end of last season and Martinez believes that if she stays healthy, she can take the team even further this year.

“Edite is the one with the experience and maturity, and I think she’s going to be the real leader for our team,” Martinez said. “(She is) a key player and a very, very smart player. She carries the whole team on her shoulders with her leadership. “

Link is a forward, playing for Long Beach State, where last season she tied the school’s single-season record with 16 goals and ranked third with 10 assists, becoming the third player in school history to reach double figures in both goals and assists. After helping to lead the 49ers to their second consecutive Big West Tournament title and an appearance in the NCAA Elite Eight, Link was named the Big West Offensive Player of the Year and was a first-team all-conference selection. She was also named to the NSCAA third-team All-America and received First-Team All-West Region honors. Link is currently attending U.S. U-23 national team camp.

Ramirez is a central defender who just finished her freshman season at the University of North Carolina. She is in the player pool for the U.S. U-20 national team and in 2011 she was selected to the U-18 national camp.

Abrile played for Lincoln Memorial University (LMU) in Harrogate, Tennessee, where she was named LMU’s Defensive Player of the Year in 2009/10. Abrile was also named to the NSCAA All-Region First Team in 2010 and the All South Atlantic Conference in 2009 and 2010.

De Mera is a forward playing professionally in Panama with the Cosmos de la Chorrera and with the Panamanian national team. She competed in the 2003 and 2007 FIFA World Cup Qualifying Tournaments and was also a member of the 2002, 2003 and 2006 CONCACAF Gold Cup qualifying teams.

Schumacher-Hodge comes with plenty of experience, currently playing on the 2012 UEFA Women’s Champion League Thor/KA team from Iceland. She has played midfield for the Atlanta Beat in the WPS and also played for the Boston Breakers and Boston Aztecs. In college, Schumacher-Hodge was named America East Midfielder of the Year in 2006 and 2008 while attending Boston University.

Boudreau is a Canadian midfielder who was named the Louisiana State University Player of the Year in 2011, along with All-SEC First Team and LSWA First-Team All-Louisiana. She has played with the Vancouver Whitecaps and has competed with the U-20 Canadian national team, playing in the FIFA U-20 Women’s World Cup in 2006 and 2008.

Garza is a midfielder who plays for the Mexican national team, while Sandoval is a defender for Mexico.

Luis represented Portugal in the UEFA European Women’s Under-19 Championship. She attends University of Texas at Brownsville/Texas Southmost College where she scored 14 goals last season. Borges has made 24 appearances with the Portuguese national team.

With the additions to the team, Martinez said that he is confident that the Blue Heat can again do well in the league. In fact, he believes the amount of skill on his team challenges him as a coach.

“I have a really big group of players with a lot of talent,” Martinez said. “It is a really great challenge as a coach to put all of those talented players on the field.”

The Blue Heat will play their first game of the season at their home stadium at Valencia High School against the Pali Blues at 5 p.m. PT on Sunday.