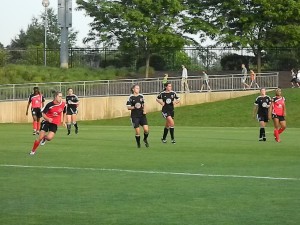 D.C. United held possession throughout much of the match, as D.C.’s defense managed to keep the speedy Piranhas at bay. D.C. United out-shot the Piranhas 11-8, with many of the Piranhas’ 8 shots coming from long range.

D.C. United could have netted another goal early in the second half. Ashley Herndon had only the keeper, Marbel Egwuenu, to beat, but Egwuenu came forward and challenged Herndon resulting in a collision.  Luckily neither player was injured, and play resumed about two minutes later.

The Piranhas played a very physical game, especially in the opening half and relied on the ability of its speedy forwards and outside midfielders to get forward. The speed of Linda Chukwuji is particularily noteworthy. Chukwuji put D.C.’s backline under pressure several times. Fortunately for D.C., Chukwuji often failed to get a shot off before facing pressure from either a D.C. defender or goalkeeper.

Virginia Beach head coach Wendy Waddell was pleased with her team’s performance despite the result. She felt that the team had a good start considering that they had been together for under a week. She feels as though the team’s biggest weakness from last season has been addressed.

“Speed was the one thing we lacked and it’s one thing we definitely have up top this year and on the outside,” she said, referring to new additions Chukwuji and Esther Anyanwu.

D.C. United Head Coach Mike Jorden was fairly pleased with his team’s performance. He commented that they started too slow and were holding the ball too long.

“We changed our system in the second half and got a little bit better possession,” he said. “It was our first time out, we’ll take the three points.”

He also praised his defense and goalkeeping unit, who recorded a clean sheet despite missing some key players including Marisa Abegg.

After the game, Howell admitted her first goal was taken to test the keeper as D.C. United had failed to get any real shots off up to that point. On the second, Howell was quick to praise teammate Hayley Siegel.

“Hayley obviously found some space on the back post and rather than selfishly try to score, she just knocked it down and it was perfect,” Howell said.

NOTE: D.C. United’s Joanna Lohman and Lianne Sanderson were unavailable due to player transfer bylaws. They are required to sit out 30 days from their last match with RCD Espanyol in Spain.