Breakers down FC Indiana 4-1 in sold out home opener 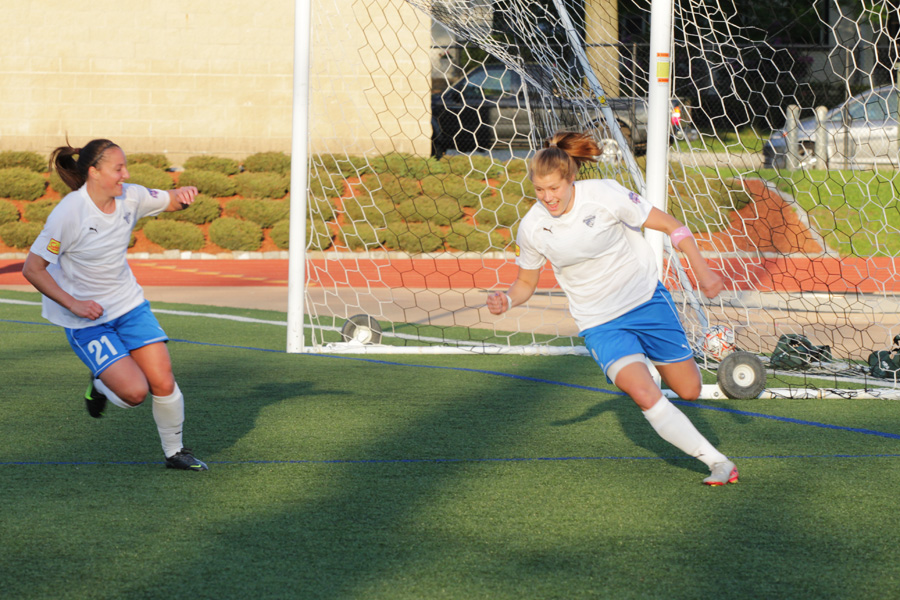 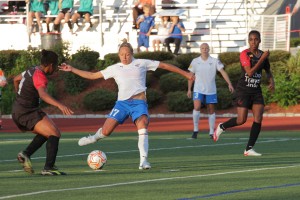 SOMERVILLE, Mass. – The Boston Breakers dominated in their first home game of the season in front of a sell-out crowd of 2,312 at Dilboy Stadium in Somerville, Mass.  The Breakers defeated FC Indiana 4-1 on Friday night with goals from Katie Schoepfer, Kyah Simon (2) and Tameka Butt for the Breakers, and Felicia Libertin for FC Indiana.

In a very physical match, Boston held possession for the majority of the game with just a few chances from FC Indiana.  The Breakers broke through first when, in the 9th minute, Cat Whitehill’s shot from 30 yards out was deflected by keeper, Geralda Saintilus, into the crossbar.  Schoepfer was waiting in front of the goal and put away the easy shot to put the Breakers ahead 1-0.

It didn’t take long for FC Indiana to get the equalizer.  In the 11th minute, Sophia Batard got the pass off to Libertin who put away the shot to bring the game to 1-1.  Breakers coach Lisa Cole was disappointed in giving up such a quick equalizer.

“Yea… because you take an early lead, that’s great, but you’ve got to keep the lead,” she said.

“They’re [Breakers] competitors, they’re experienced, they’re winners, they have this desire to keep improving and getting better and I don’t think one little challenge is going to necessarily take them off their game,” she said.

The Breakers wouldn’t look back after Simon’s goal.  Other than a few chances for Indiana, Boston controlled the remaining 77 minutes.  In the 22nd minute, Simon got her second goal of the season.  Jessica Luscinski crossed a beautiful ball into the box where Simon was waiting and finished with a header to put the Breakers up 3-1.

Simon was again involved in the lone second half goal.  In the 57th minute, Butt, after some fancy footwork in the middle of the field, got off a pass to her Aussie teammate, Simon, and got the ball right back in front of the goal to put away the score and put the Breakers ahead 4-1 with her first goal of the season.

The Breakers were excited about the goal scoring chances they had Friday night and what that means for the rest of the season.  Whitehill wasn’t surprised that her shot led to the opening goal.

“I know how awesome our forwards are at following the ball.”

Breakers captain Leslie Osborne is excited about the goal scorers the team has this season.

“It’s good, we’ve got a lot of goal scorers on this team,” she said. “And you can tell, Cat Whitehill took the first shot, she can score. We can all score, so it’s going to be a fun season.  And I think we could have had maybe eight goals tonight, so we’ve got to stay mentally focused no matter who we play against.”

Getting the win was, of course, a high point of the night, but the team was also enthusiastic about having their first game at home.

“I think the most exciting thing is that, [we have a] new stadium, and a new city, and a great sell-out crowd that we heard the whole game,” Osborne said. “And just to be back in a Breakers uniform and playing again in front of our Breakers fans is a huge thing and to get a win for them and score some goals, that’s a good day for us.”

Boston doesn’t have long to prepare for their next game as they head down New York to face the NY Fury on Wednesdayat Hofstra University.  The Breakers will then come back home for a highly anticipated match against the Western New York Flash, the only other team in WPSL Elite that also played WPS in 2011, on Saturday, May 26. 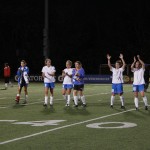 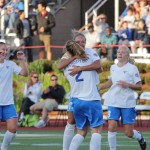 The Breakers celebrate one of their four goals from Friday’s 4-1 win over FC Indiana. (Photo Copyright: Meg Linehan) 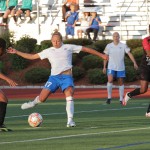 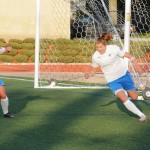 Katie Schoepfer celebrates her opening goal in a 4-1 win over FC Indiana on May 17. (Photo Copyright: Meg Linehan) 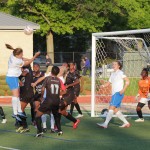 Cat Whitehill goes up for a header on a corner kick. (Photo Copyright: Meg Linehan)