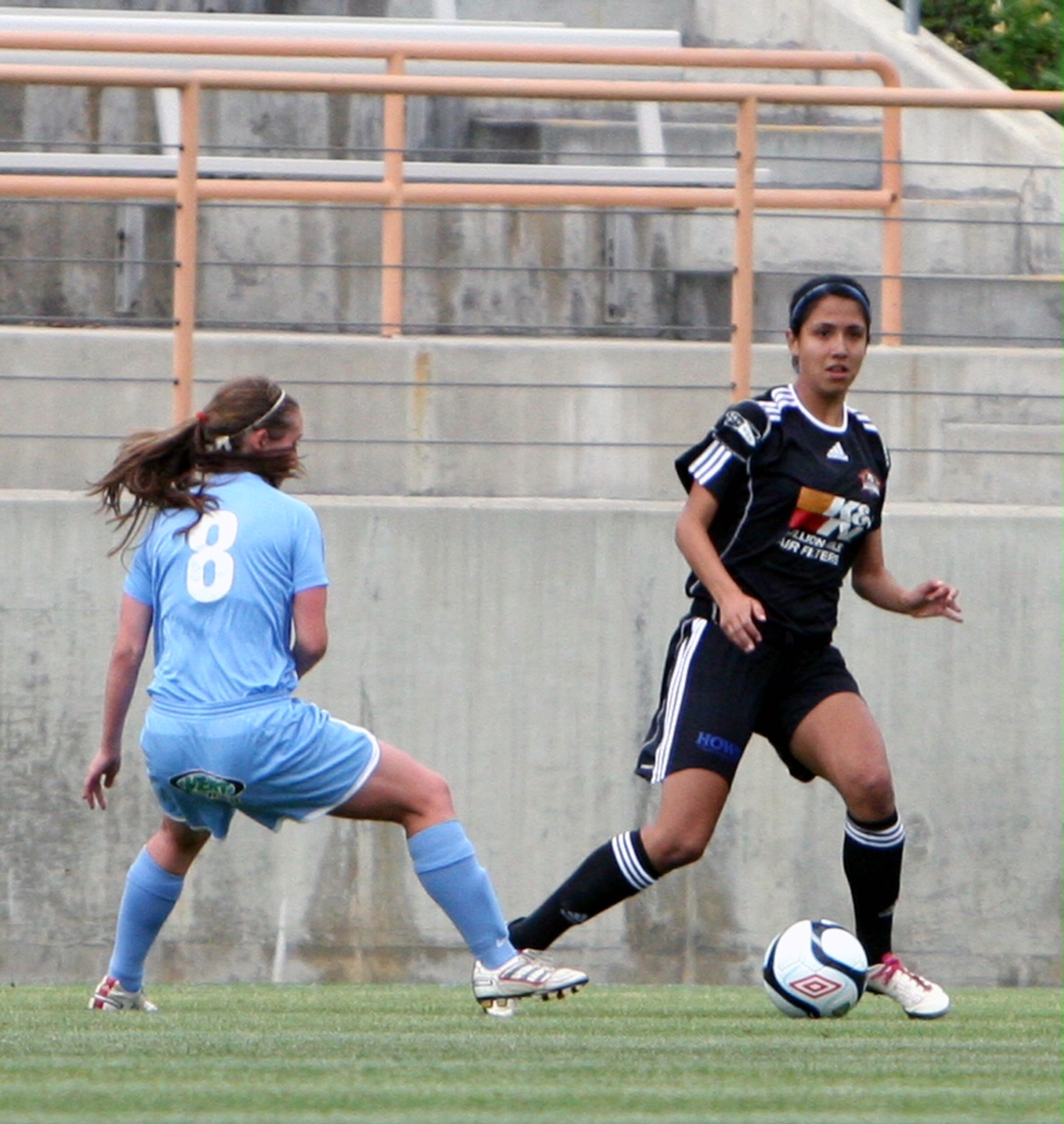 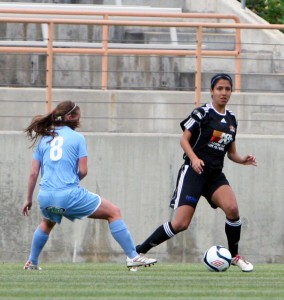 Christina Murillo (right) is one of only five returners for the LA Strikers. (Photo: Debby von Winckelmann)

The LA Strikers played their inaugural season in the W-League last year and finished with a 4-9-1 record. This year the team looks very different, starting with the front office. Now under the ownership of businessman Steve Miller, the team also has a new, full-time general manager in Rebecca Neuron.

Demian Brown, who coaches the women’s team at Cal State Fullerton, came in mid-season last year and returns as head coach. Brown did a good job with the personnel that was already in place, but this year he has been able to recruit players of his choosing and the result is a lot of new faces.

“We’re excited about the group that we have,” Brown said. “Different, but the thing that I’m excited about is that we’ve been able to build a team that has been a core of players that have been busy and that has been with each other over the last two months. I think that really lends itself to building a strong group.”

Murillo, a member of the Mexican Women’s National Team, competed for Mexico at CONCACAF Women’s Olympic Qualifying Tournament in Jan. 2012, starting the team’s second match against the Dominican Republic. She also played at the CONCACAF Women’s U-20 Championship in March 2012. Murillo just completed her freshman year at Michigan, where she was named to the Big Ten All-Freshman Team after starting at midfield in all 19 of the team’s matches.

Valentine played for Brown at Cal State Fullerton and was the Titans first four-year All Big West honoree. Brown brought her to the Strikers immediately after he was named head coach last season and she returns as the Strikers’ captain and center back.

Dixon, a forward/midfielder, played for Cornell University and was named MVP in 2008. Dixon received All-Ivy League honors in three of her four seasons playing for Cornell. Dixon is a product of South Pasadena High School, where she was the school’s athlete of the year four times.

Flemming, a defender, played for UC Irvine, where she was the team captain before graduating in 2008.

Beard is an international from the UK, where she currently plays for the Durham Wildcats. She joins the Strikers after playing for the Santa Clarita Blue Heat last season, where she helped the team to the W-League Regular Season Western Conference Championship.

Krohn, a former CSUN standout, has been playing professionally in Brazil for Santos Futebol Clube and the Los Angeles Premier FC of the WPSL. She was an All-Big West Conference honoree while at CSUN and held the all-time scoring record until a year ago.

Bell also played for the Los Angeles Premier FC last season and was an All-West Coast Conference honoree during her time playing at Loyola Marymount University.

The Strikers have also added midfielder Cami Privett, a rising star at UC Irvine, where she just finished her freshman year.

“I think we have some really good pieces going forward and going into the season,” Brown said.

While they may not have a lot of big names that other teams boast, one advantage that the Strikers have moving forward is a team with a core that has been playing together for months. In a league where a big challenge is building team chemistry in a short season with so players coming from many different places, the Strikers have a jump on other teams in this area.

“Playing games against Northridge, Pepperdine, LMU, and just recently, our 5-2 win at Bakersfield, gives me a lot of good feelings about what we might be able to do in this league,” Brown said.

The Strikers opened the season on Sunday with a 2-0 loss to the Pali Blues at home. LA returns to action on May 27 when the Strikers host Santa Clarita.