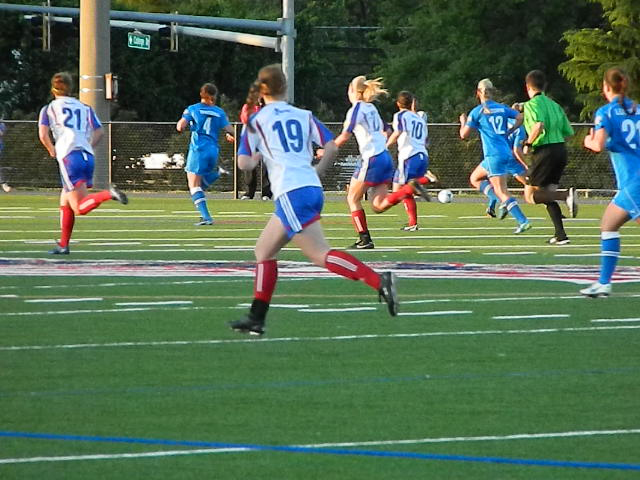 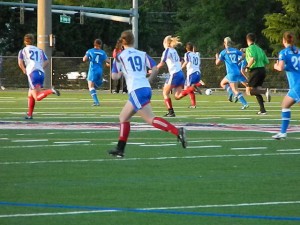 The Boston Breakers capitalized on the ASA Chesapeake Charge’s nervousness in the beginning minutes of their first ever WPSL Elite League match on Thursday night. The Breakers went up 3-0 less than twenty minutes into the match.

After allowing the early goals, the Charge settled down and held the Breakers scoreless for the remaining seventy plus minutes of the match.   Charge co-captain Christine Nairn said Chesapeake was uneasy at the start of the match.

“We’re starting five high school seniors and look across the field and see big name players like Cat Whitehill and Leslie Obsorne – I think all of us were a little scared at first,” Nairn said.

Nairn said the team will look to build upon the way they responded to going down 3-0 nothing early in the game.

Veronica Napoli kicked the Breaker’s early scoring frenzy in the first minute off a nice ball by Courtney Jones.  At the 15 minute mark, Katie Schoepfer extended the Breakers’ lead to 2-0 with Napoli assisting. Jessica Luscinski scored the final goal of the game about 90 seconds later with Breakers captain Leslie Obsorne recording an assist.

Boston dominated play throughout the first half and the Charge failed to put serious pressure on Boston’s defense until the second half.  The Charge had several chances in the second half but the Breaker’s defense held strong.  The Charge had their attack stopped numerous times when a ball was played too far forward to maintain the attack. This issue will likely be resolved when the team gets more minutes together. Charge co-captain Jess Hnatiuk noted that the team only had three practices and two exhibition matches prior to last night’s opener.

Boston will now remain in the area as they face the W-League’s D.C. United Women on Saturday in an exhibition match that can aptly be called the battle of leagues.  Many eyes will be on the Maryland Soccerplex this Saturday as this game provides a rare opportunity to compare the tactics and quality of the top remaining U.S. women’s soccer leagues.

Meanwhile, the Chesapeake Charge will travel next weekend to Western Massachusetts to face the New England Mutiny on Saturday May 19th.

Note: Australian internationals Kyah Simon and Tameka Butt were unavailable for last night’s match. According to the Boston Breakers their international clearance failed to arrive before the game.

Attendance was estimated to be 400 people.