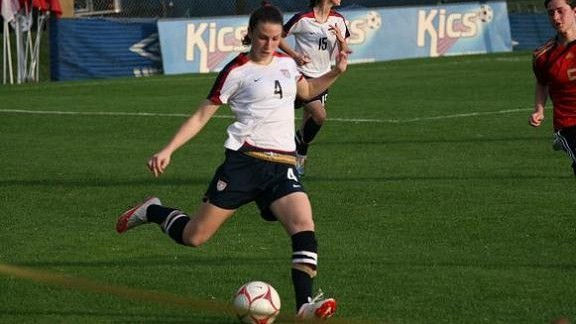 The United States Under-17 women kicked off their World Cup qualifying campaign with an expectedly convincing 10-0 win over the Bahamas on Thursday in Guatemala, defeating the tournament newcomers 10-0.

Midfielder Summer Green accounted for half of those goals and Margaret Purce added a brace for the U.S. women, who out-shot the Bahamas 52-1 on the day. Little was expected of the small nation of islands, which is participating in its first-ever womens’s championship tournament at any age level.

U.S. head coach Albertin Montoya’s team was convincing from the start, although as we learned in 2010 (granted, with a different coach and group of players), the tournament only really gets started in the knockout phase. These matches serve as tune-ups for the overpowering U.S. women.

Purce opened the scoring in the first minute and Green increased the lead to 2-0 five minutes later. The Bahamas then held off a persistent U.S. attack and the match looked like it would enter halftime with a respectable score.

Until Green found a spark, that is.

She scored three goals in five minutes on the verge of halftime to give the Americans a convincing lead at the break. The game was a display of goal scorer and goal creator as Green showed her finishing prowess and midfielder Morgan Andrews sprayed the ball around the field, slipping in through balls and finding her teammates’ feet in dangerous position.

Now the Americans move onto a tougher opponent – Trinidad & Tobago – on Saturday at 4 p.m. ET.

In other Group B action, Mexico defeated Trinidad & Tobago 2-0.

The tournament kicked off on Thursday with defending champion Canada cruising to a 6-0 victory over Panama and Jamaica defeated hosts Guatemala 3-0.