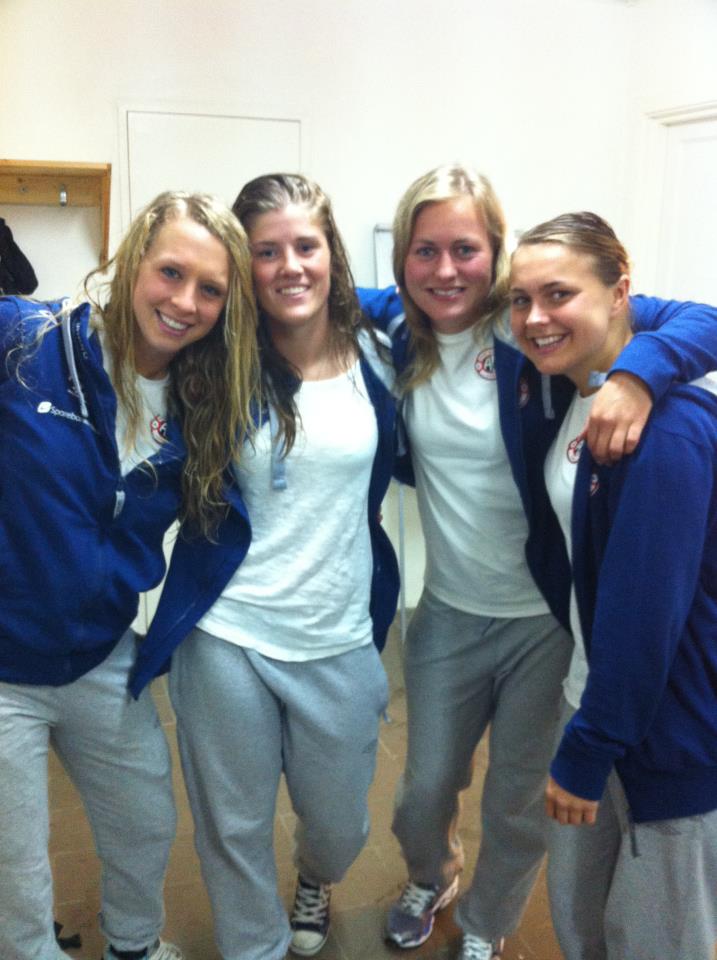 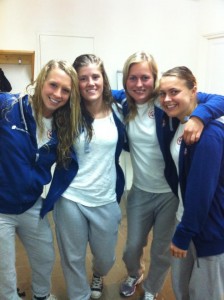 Ashleigh Gunning, left, found a funny catch to the nickname of her teammate, Tina (far right).

I would like to encourage everyone reading this to let the 12-year-old who still lives inside them out; because that adolescent is going to get a good laugh. I generally am not one for laughing at someone’s misfortune, but these are stories that you can’t help but enjoy. Anyways, I’ve gotten permission from everyone talked about, so you don’t have to feel too bad.

One of the most interesting aspects of living abroad is having the opportunity to learn (or try to lean in my case) a new language. I have been able to provide some good laughs for my teammates and friends here in Norway when I try my hardest to pronounce sounds from the back of my throat, letters that I’ve never seen before, and words that are 25-plus letters long. I get a sense of joy when I finally say it right and see my teammate’s face lights up—they are so encouraging! But, the real joy comes when a word I’ve known my whole life (in English) means something completely different. So, here are a few of my favorite…and least favorite examples:

Later this week we are playing host to a team from Hamar, Norway which is about an hour and a half north of Oslo. They will be wearing a red Adidas kit, and they have a record of 0-3-0… oh you’re wondering about the name of the team? Well, get the internal immature 12-year-old ready to giggle because, we’re playing a team called Fart… yep, that’s it, just Fart. Written on the front of those red jerseys it says in a bold font: FART.  It’s really one of those unfortunate translations that sometimes happen. In Norwegian, fart simply means, speed—a totally normal name for a women’s professional football team.

It becomes really unfortunate when these mishaps with translations happen when it’s someone’s name… especially when it’s my name! In English speaking counties Ashleigh (or Ashley, Ashlee, Ashlie, etc) is an incredibly common name. If you have a friend with this name, I’m guessing you’ve called them Ash, right? Well, that’s what my family and friends call me. It’s what I’m always called when I’m on the field playing, because it’s shorter and easier than Ashleigh. Makes total sense… Not a good thing when living in Norway!!

A few days after arriving in Norway, I heard one of my teammates say “Asshhhh” with a scrunched up face when she accidentally rubbed up against a dirty car with her white jacket. That’s because “Æsj”, pronounced, \ˈash\, means “eeewww!!” So, I often hear it when I’m spending time with the local elementary age kids and someone picks their nose, or farts (not the Norwegian fart, the English fart). I try not to turn around when I hear my name, because more times than not I’m going to see something gross I don’t want to see.

I’m not the only one on our team who has a name with an unfortunate double meaning; one of my sweet teammate’s name is Åsne Eide. Åsne is a fairly common name in Norway, but when we were playing a preseason match in Sweden and her name was announced as a starter before the game the other team, filled with Swedes , giggled a bit. That’s because Åsne in Swedish means Donkey. So, that day we had Donkey Eide playing left fullback. Thankfully she is a beautiful girl and no one would ever actually confuse her for a Donkey, no matter what her name means!

The neatest double meaning of a name is for my teammate Tina Algrøy. Tina is a speedy and crafty striker who wears number 10. The number of her jersey is important because in Norwegian ten is “ti,” pronounced, \ˈtē\ —  the same as the first letter in the name Tina. When I am playing with Tina, I often call her “T” because it’s easier than saying all four letters of her name (who said Americans are lazy?). So, in essence I am calling her by her number AND her nickname. I’ve tried to convince her that she should sign her name 10na; I mean how awesome would that be?!

I’d love to hear if you guys have any examples like this that you’ve come along in your travels—go ahead and comment below so we can all enjoy and get a good laugh at your unfortunate translation.