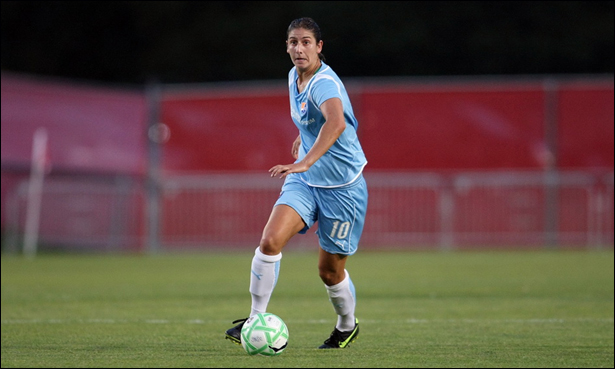 Midfielder Yael Averbuch will play for the New Jersey Wildcats in 2012, the team announced on Wednesday. The news comes less than one week after the announcement that Jim Gabarra will guide the USL W-League team this season.

Averbuch had signed with the Atlanta Beat before the demise of WPS and spent a few brief and interesting weeks with Rossiyanka of the Russian Women’s Premier League earlier in the year. Just as all players realize at some point or another, Averbuch decided her body needs some type of break.

But, like all passionate players, it didn’t take long for that itch to play to really set in. So, she’ll play for the Wildcats, once the dream team of the W-League, winning the league title in 2005. U.S. internationals Heather O’Reilly, Lindsay Tarpley, Tobin Heath, Cat Whitehill and Carli Lloyd, among others, have all worn the Wildcats jersey.

Averbuch now joins the crowd of players with U.S. caps to play for the suddenly revived club. The Wildcats play close to her hometown of Montclair, N.J.

New Jersey’s affiliation with Sky Blue FC – a team in a league, WPS, that is not playing in 2012 and does not look likely to return in 2013 – could set-up the Wildcats as the state’s premier team. It is certainly something to keep an eye on as the United Soccer Leagues build toward launching a W-Pro league.

“Yael is a very technical player, and she brings to us a lot of experience in WPS and with the national team,” Gabarra said. “She will provide us with leadership, as well as stability, in the middle of the field. She will certainly be a big part of the back bone of this team. Additionally, I think it is really important we get as many players as possible involved with the Wildcats and Sky Blue FC, long-term wise.”