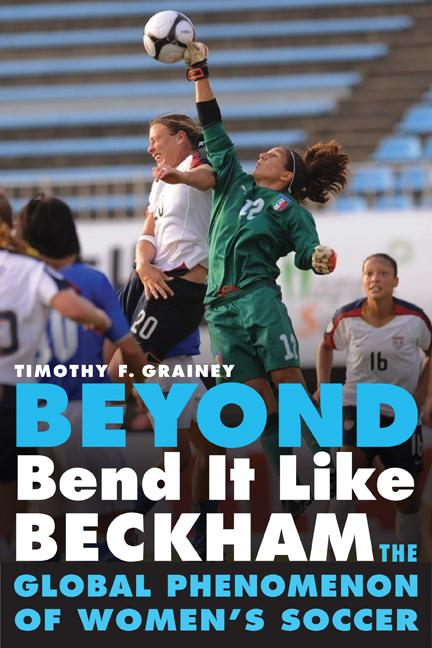 Despite a bump in attention still very much in its infancy – a word so applicable to the sport as a whole – there is still a serious lack of coverage for women’s soccer. That was one of the principles on which this website was founded and it remains our – and my personal – commitment to bring fans media coverage of a sport so often neglected and athletes who are too easily objectified.

Given such a lack of readily available information on women’s soccer, there is a real sense of excitement when a great resource becomes available, and that is exactly what just happened with the March release of Tim Grainey’s book, Beyond Bend It Like Beckham: The Global Phenomenon of Women’s Soccer.

I have long heralded Grainey as the king of knowledge on international women’s soccer. While I have spent the past three years scrutinizing women’s soccer in North America, Grainey has spent parts of the last three decades collecting information on the game and watching it grow up. All that culminated into a piece of literature that serves as both a compelling a read and a reference book.

Really, there is nothing else out there like it. Not that I’ve come across, anyway.

I interviewed Grainey last week on “This Week in Women’s Soccer” to talk about his book and I said this there as well: His sources are so impressive, they include people who I did not know even existed (no offense to any of them).

Which women’s players come to mind when the club Santos of Brazil is talked about? Marta? Cristiane? Grainey gets the dirt on what I can only describe as shocking living conditions at the club from two Canadians and an American who played a good level of college ball and took a shot at the professional life in Brazil.

They soon realized things aren’t so pretty as a women’s professional soccer player (the subtitle of the section is “Domestic League Imports – ‘What did I get myself into?’”). The chapter depicts how the 20 Santos players shared four small rooms, an awful diet and somewhere between $50-$250 per month.

Grab a copy of the book for some further details on what sounds like quite a humble beginning for women’s soccer players in Brazil.

I’ve honestly spent a few weeks trying to wrap my head around how I could do this book full justice in writing my review, but I’ve deemed that the only real way to do that is to suggest you all go out and buy it. My reminder that I should probably get around to writing this came in the mail on Tuesday afternoon, when I received the official print copy to replace my advanced copy.

This book has everything: From the fast rise of the Canadian national team under Even Pellerud, to the rise and fall of domestic leagues in the U.S., to a profile of Egyptian executive Sahar El-Hawary, the book touches on every corner of the world in women’s soccer.

It also recaps some great history, diving into the story of the Dick, Kerr Ladies team from Preston, England. I think I’m in the minority when I say I know about them and their legacy in women’s soccer and Grainey does a great job of providing context.

He also shares some information on an unofficial women’s world cup in Mexico in 1971, which reports indicate drew 110,000 fans to Estadio Azteca for the final, where Denmark beat Mexico 3-0.

It’s part compilation – aggregating articles from various authors across the years – and part exclusives, with those interviews of one-time Santos players being only one of many examples of the people Grainey has managed to track down.

Unfortunately, the volatile nature of women’s soccer makes some of the material dated since most of it was written before the media bonanza that was the 2011 World Cup and before the fall of Women’s Professional Soccer, but that is but a small tick against an otherwise fantastic read.

We’ve published a couple of Grainey’s articles on The Equalizer before, including this gem on women’s soccer in Turkey, and I can definitely say now that I know the guy who literally wrote the book on women’s soccer.

A lot of statements in this book – both from the author and quoted sources – resonate with me as to why women’s soccer continues to struggle, and ultimately fail. We are yet to see a women’s soccer league, team or event not treated as a novelty – like the novelty of the world’s top competitions that roll around every four years.

Here is what Burton Haimes, chairperson of the USSF committee formed in 1991 to investigate the feasibility of a D-1 women’s pro league, said in 1999 on starting a league: “The idea is to launch a league not just based on World Cup results. People are not going to invest [only] as a statement for women. In the end, they want money.”

Indeed, in the end it is all about money, something that on a large scale still has not found its way into women’s soccer.

Purchase Beyond Bend It Like Beckham: The Global Phenomenon of Women’s Soccer