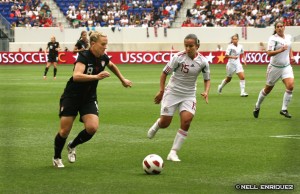 Amy Rodriguez came on at halftime in the USWNT's 14-0 victory over the Dominican Republic on Jan. 20 and scored five goals, tying her with Brandi Chastain, Julie Foudy, Tiffeny Milbrett and Abby Wambach for the most goals in a single game by a U.S. player. (Nell Enriquez | www.pitchsidereport.com)

Lloyd opened the scoring in the 18th minute after Christie Rampone’s long free kick fell to Lloyd’s feet from just six yards out for an easy tap-in. Five minutes later, Boxx broke free of Brazilian defender Erika and headed in the second American goal at the back post thanks to a simple but effective service from Lauren Cheney.

Heather O’Reilly had a chance to make it 3-0 before halftime when Abby Wambach slipped her in behind Brazil’s defense, but goalkeeper Barbara came off her line effectively to make the save.

The most precarious happening of the opening stanza came in the 30th minute when Cristiane’s beautiful header was called back. The assistant referee ruled that Formiga’s cross had whipped over the endline before coming back in bounds. That would have drawn one back for the Brazilians and changed the complexion of the game, but instead it remains a mystery call with little help from the video replay.

The same AR (waiting for confirmation on whether it was Emi Chiba or Makoto Bouzono) was involved in calling off Alex Morgan’s would-be 68th minute goal. That was another dubious decision from the lineswoman as Morgan made a delayed run from an overtly obvious onside position.

Amy Rodriguez – who replaced Morgan in the 71st minute – added the cushion goal for the United States in the 83rd minute when her shot from eight yards out deflected into the net and gave the U.S. a 3-0 victory.

Five takeaways from the USWNT’s 3-0 win over Brazil:

1 – It was a good result for the Americans, who despite having a huge rivalry with the Brazilians are now 24-2-3 all-time against their rivals. And so it has to be asked, when will this become more of a rivalry? Just as so many players from other teams and sports have noted while ‘trash-talking,’ there are no rivalries in which one team wins every game. Every USA-Brazil game is tight, but the numbers don’t lie: Brazil just can’t find a way to beat the U.S. (except for twice of course, with one time being that really important 2007 World Cup semifinal). Right now, USA-Japan is far more enticing than USA-Brazil.

2 – Brazil’s defense is still an absolute nightmare. On Tuesday it just as bad as it was 10 days ago against Canada when Brazil lost 2-1, when the team got absolutely smoked on two botched offside traps. Brazil tried the trap again in the 32nd minute of this game on a Rampone free kick and couldn’t even get it right in a dead ball situation. Four Americans were left alone in the box as Wambach put her header wide of goal. Brazil went from its wild two marking back-sweeper combination under Kleiton Lima to a flat four which is, well, too flat, under Jorge Barcellos. The team definitely needs time to develop its new system and Barcellos has a track record of success, but there is clearly a long way to go. Did I mention all three goals were on set pieces?

3 – U.S. head coach Pia Sundhage has some tough choices ahead of her. Only 18 players will head to London. To make that sound as dramatic as it really is, only 16 players will join Hope Solo and Nicole Barnhart in London. Who does Sundhage cut? She has an abundance of attacking players, but all of them have played well recently and are riding high on confidence following some emphatic Olympic qualifying results. Should she keep them all, then? That would mean cutting defenders, an area of some uncertainty for Sundhage (although the indication is that it will be Rampone, Rachel Buehler, Kelley O’Hara and Amy LePeilbet). Players like Rodriguez, Tobin Heath, Sydney Leroux, Becky Sauerbrunn, Stephanie Cox, Heather Mitts and perhaps a couple others are certainly on the bubble.

4 – Two games in three days? No sweat. The United States did not show any signs of fatigue despite starting the same 11 players less than 48 hours after the team’s 1-1 draw with Japan on Sunday. That is encouraging given how compacted Olympic matches are. Games are every three days, with the gold and bronze medal match qualifiers playing their sixth game in 15 days on August 9. Not even a last minute change to the kickoff time (bumped up four hours with only eight hours’ notice thanks to a deadly typhoon) deterred the U.S.

5 – How genuinely excited was Rodriguez to score that third U.S. goal? She looked pretty darn happy. Some signs of this came out in Olympic qualifying in January when she scored five goals in one half against the Dominican Republic in a 14-0 victory, which could be looked back on as the game where the monkey got off her back and frustrations were relieved. Rodriguez still needs to make the Olympic roster, but, regardless, her genuine celebrations are refreshing in an era of goal scorers showboating (primarily on the men’s side).

Brazil and Japan are scheduled to round out the Kirin Challenge Cup on Thursday.