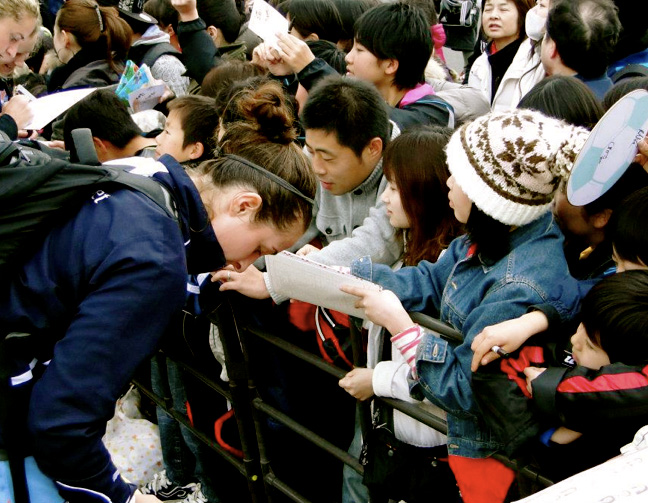 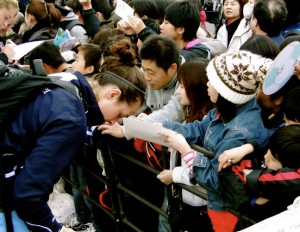 Soccer knows no language; it is a language within itself. The way a ball moves on the pitch, might as well be writing. Every moment on the field creates a story, and this story is buried after every game and added to its immortal library. A library not separated by a single language, simply the language of soccer.

This concept was clear on my visit to Japan. Even though the Japanese fans and I couldn’t verbally communicate, all 7,500 people in the stands and I were able to have a connection. A connection that was so apparent through all the chaos going on around me in the stadium. Walking through the lines of people after our game signing autographs and meeting fans, I could understand not one word of what these people were yelling at me. I could, however, understand their smiles, their happiness, and of course their peace signs.

I wasn’t playing in the world of women’s professional soccer following the 1999 World Cup — around 9 years old for me — when there was soccer hysteria in the United States. My how things have changed since then! I imagine it being a bit similar to what I was able to experience in my recent trip to Japan with Sky Blue FC.

We arrived in Kagoshima, Japan after over 20 hours of traveling on Friday, March 16. Upon arriving at our hotel, we were greeted with flags, banners, signs, fans, and employees of the hotel just waiting for us to arrive. These people were eagerly awaiting our arrival to their country, and they had no idea who we even were. We weren’t national team players or anything, just a group of WPS players and hopefuls grateful for an opportunity. I was so tired that first night I vaguely remember how I arrived at the hotel. However, I do remember thinking, “Wow. This is unreal. Is this a dream? …I’m still going back to no league in America after this.” 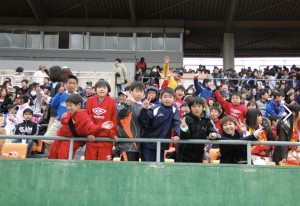 The fans in Japan were unlike anything I imagined. Driving up to our first game in Kagoshima two hours early, there were already people buzzing around the stadium and even some people who had already found their seats. Their love for soccer radiated throughout the entire country. At a time where Japan was shattered from the tragic events one year ago, their women’s national team was able to defeat the United States and win the 2011 World Cup, thereby unifying their country in it’s time of crisis. The whole country rallied around the sport, and their nationalism heightened to a completely different level.

Now, one year later, their passion and love for not only soccer, but their country as well, was visibly apparent to an outsider like myself. The environment playing in that stadium was something I will never forget. Although I was competing against INAC Kobe, they did not feel like my enemies. (The ref may have felt like my enemy, but that was expected). Even though their fans were chanting for INAC Kobe, I still somehow felt a sense of support from these amazing people who were supposed to be cheering against me. After the game, the way we were received by the fans was outrageous. When we walked out of the tunnel, there was a line of fans stretching for maybe 100 yards wanting pictures and autographs of us. Not just lines of people, I’m talking crowds and heaps of people!

It got me thinking about my experience with WPS. There are so many amazing and loyal fans in the United States, so why do our stadiums still not get filled? Why do people rush out after games instead of sticking around, and why are the players of WPS so quick to leave the field without paying closer attention to the fans that do stay? I know this is a generalization, but it is clear that no league can function without fans. Fans bringing friends and family and buy tickets and merchandise. Even though our league here may not be currently operating, there is still an entire world of love out there for this sport that we have fought so hard to make survive in America.

By making one trip to Japan, I honestly believe that Sky Blue FC was able to touch the lives of many people and impact a country by simply showing up to play a couple of games. Not only did we reach out to Japan on our visit, but we also reached out to American soil on our visit to the Okinawa military base. It was heart-warming to be able to interact with the kids and their families through our unified love of soccer. You could tell when speaking with the kids how excited they were to have visitors, and how grateful they were that American athletes were there to teach them about soccer and healthy living. 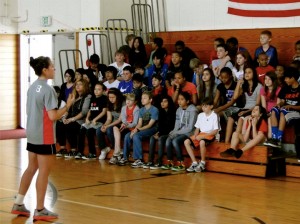 The love is out there. Some people have lost hope in female soccer in America, but after reaching out to the amount of young people that we were able to interact with in Japan, I have not lost hope. Not one person who was with Sky Blue on this trip to Japan has lost hope, and you shouldn’t either. Resolution Sports has done an unbelievable job documenting our trip to Japan on Sky Blue FC’s Facebook page with photos and videos. I encourage you all to take a look at everything we were able to do there, and most importantly take a look at the videos. I assure you that just by watching the fans in Japan, seeing the looks on their faces and seeing the happiness from the children on the American military bases, you too will have hope.

A universal language. How about that?! How simple things are when everyone can communicate and understand each other. All we need is an outlet. WPS may be down, but women’s soccer is up whether you see it or not. The WPSL Elite league, the W-League, the WPSL — leagues all over America with some of the best players in the world on the rosters. You name it, we got it. I am so excited to continue this fight for women’s soccer, and I will be doing so with the Boston Breakers this summer. The players of WPS are willing to fight for this game, and I hope the fans are willing to fight with us as well.

“Nothing worth having isn’t worth fighting for.”