Christine Sinclair said prior to Saturday’s game against Brazil that she is enjoying her new role under Canada head coach John Herdman as a withdrawn forward. On Saturday, she showed why.

Sinclair scored twice against Brazil to lift Canada to a 2-1 victory over Brazil at Gillette Stadium in Foxborough, Mass. on Saturday. The Canadian captain broke through a flat Brazilian defense once in each half to lift Canada to victory.

Brazil’s Gabriela Zanotti Demoner scored a penalty kick in the 88th minute for Brazil, to make things interesting, but it was not enough for the Brazilians.

Brazil was without star Marta for the first 45 minutes since she only arrive in Massachusetts on Friday night. They were also without stars Rosana and Cristiane, although those two and Elaine are expected in Japan.

Sinclair found net in the 12th minute when she broke through Brazil’s back line, which was caught flat for the first of many occasions on the day.

Jorge Barcellos, who coached Brazil from 2006-2008 and took the helm back from Kleiton Lima again in November, has implemented a four back system. Brazil’s three defender setup in the 2011 World Cup was exposed for its unorganized, outdated style of play, which cost the team games (the most high profile of which being the quarterfinal loss to the U.S.).

On Saturday, Barcellos’ four back system looked shaky as well, but it is still in its infancy. Brazil has four months to fine-tune things, if the team gets training time together.

Sinclair’s first goal was a result of a Candace Chapman ball over the top from midfield. Sinclair broke through Brazil’s defense – which failed to properly time its offside trap – and finished the ball through the legs of Brazilian goalkeeper Andreia.

“I wasn’t aiming there,” Sinclair said.

“I took advantage of a gap in the back line and took a crack at it.”

The ensuing half hour looked like a match between two rusty teams that have not played together for some time. Canada, the more active of the two sides having just qualified for the Olympics in January, controlled most of the match, but failed to find a breakthrough.

Brazil’s biggest set-back came in first half stoppage time, when Andreia was stretchered off the field after knocking heads with Canada defender Emily Zurrer. Lauren Sesselmann sent a cross into the box that Andreia went to punch, but the Brazilian keeper dropped to the ground immediately upon contact with Zurrer. Andreia’s status is still unknown.

The game changed following halftime, when Marta entered the match. The crafty, once five-time player of the year Brazilian started the match on the bench after not arriving in Boston until late in the evening on Friday. She was not released by her Swedish club team, Tyreso, because Saturday was not a designated FIFA play date.

Marta’s presence was made known in the 65th minute when she smacked a header square off the crossbar. Demoner provided that cross.

Ten minutes later, Marta forced a huge save out of Karina LeBLanc, celebrating her 100th cap for Canada. Renata Costa was active throughout the match and provided service to Marta, who hit the one-hop half volley from six yards out only to be denied by LeBlanc’s quick reaction.

As usual, however, Sinclair stepped in to calm her team. Sophie Schmidt settled a ball over the top into the path of Sinclair in the 78th minute and Canada’s captain buried the ball into the side netting with her left foot.

Brazil, the No. 4 ranked team in the world, was in a state of shock. Demoner’s penalty kick goal – following Carmelina Moscato’s take down of Erika Santos in the box – did provide some hope for Brazil with two minutes to play, but Canada held on for victory to break the streak of five-straight ties between the two countries.

Brazil now heads to Japan for the Kirin Challenge Cup, which includes games against the U.S. on April 3 and Japan on April 5. Canada is headed across the Atlantic to take on Sweden on March 31.

Below are highlights of the match along with a screenshot of Brazil’s shockingly bad shape (six players flat on the back line) on Sinclair’s first goal. To be clear, Chapman has already played the ball, so although Sinclair looks offside, she was not when the ball was played: 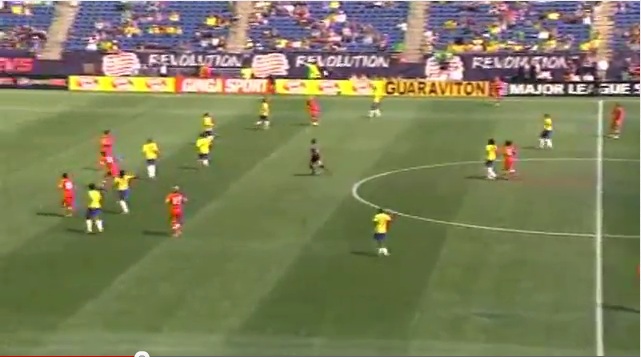