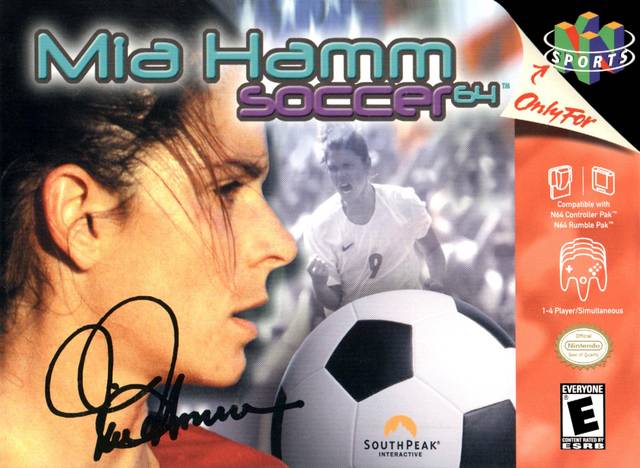 The most prolific goal scorer in international soccer history hit a big milestone on Saturday. March 17 marked Mia Hamm’s 40th birthday. The former U.S. international scored 158 international goals — the most ever among any man or woman — in 17 years of international play.

Ironically, I happened to dig up Mia Hamm Soccer 64, a video game for Nintendo 64, on Friday. To my knowledge it is the only video game ever made exclusively for women’s soccer. Wendy Gebauer serves as the commentator and Hamm has her own all-star team. The game, in comparison to today’s standards for graphics and play, is nothing special (it got some bad reviews).

But hey, it’s fun to think about. Here are the markets in Mia Hamm Soccer 64: Atlanta, Boston, Chicago, Columbus, Dallas, Denver, Detroit, Mia Hamm’s All-Stars, Miami, New York, Philadelphia, Portland, Raileigh-Durham, San Diego, San Francisco, Saint Louis, Tampa-Orlando and Washington, D.C. Considering the game was released in 2000, this is eerily similar to an expanded compilation of WPS and WUSA teams plus some MLS hopeful markets. Add in Los Angeles, Rochester, Seattle and a couple of Canadian markets and this would be one heck of a league.

Maybe one day, women’s soccer can find the success that MLS is finally seeing 16 years into the league. Much of that is thanks to markets like Portland, which just absolutely love soccer. Whether or not these soccer-mad cities would support a women’s team with fewer numbers but similar passion remains to be seen, but Seattle Sounders Women should serve as a good case study this summer.

Alas, reality has to set in. But hey, we can dream right. Happy Birthday, Mia.