Colorado Rapids Women to play in W-League in 2012 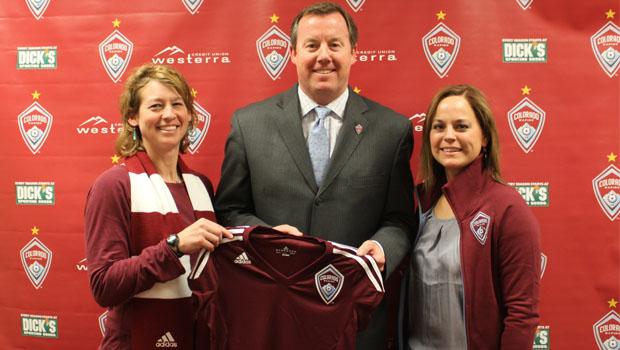 Major League Soccer’s connection to the women’s game is continuing to grow, albeit very slowly. On Tuesday, the Colorado Rapids announced a partnership with Colorado Force FC to rebrand the USL W-League team as Colorado Rapids Women.

The move lines the Rapids up with fellow MLS sides Seattle Sounders FC, D.C. United and Vancouver Whitecaps as having some affiliation to a W-League team. It is another positive step for creating synergy between men and women at the professional and semi-professional level in North America, but the relationship is still in its infancy.

Colorado’s situation matches up closely with that of D.C. United Women and Seattle Sounders Women: The teams will use the identity of their MLS brothers and share common practices such as marketing efforts, but the affiliation mo stops there. The MLS teams own no stake in these W-League teams, with the exception of Vancouver.

The Whitecaps are the sole W-League team that fall under the same ownership umbrella as their MLS counterparts. The connections, though increasing, are still very situational. Don’t expect a ‘WMLS’ anytime soon.

“I don’t think from an MLS league standpoint that this is on their radar,” USL W-League Commissioner Amanda Duffy said on Tuesday. “At least not from an imminent perspective.

“With these partnerships there is very little risk for the MLS teams and yet they have so many resources,” she said.

Thus, it’s important to reiterate that MLS still has no collective, unified interest in women’s professional soccer (and didn’t have any in Women’s Professional Soccer, the league, either). The individual teams are driven by individual owner ambitions.

And – this being the catch of course – there is still no financial burden for these MLS teams, save Vancouver. Even for Chivas USA, which partnered with the W-League’s LA Strikers, and FC Dallas, which dons its name on a WPSL team uniform, the deals are almost exclusively for trade.

MLS teams are not yet at a point – and might not for some time reach a point – at which they are willing to invest significant money into a professional product. One day, perhaps, but not until a proper model can be constructed. To reiterate, this is a business. That is a sentiment that seemed to get lost in all the chatter of support for WPS. At the end of the day, operating in seven figure deficits is not sustainable for anyone.

As for the W-League’s professional league ambitions (the league is currently semi-professional), plans still remain in place for an elite tier that currently has the working name of W-PRO. Elite level teams like Seattle, Vancouver and the Pali Blues are prime candidates for forming a professional tier.

Plans still remain in place and a 2013 launch has been flirted with, but that is not set in stone. Duffy said that if some teams commit to W-PRO for 2013 but there are not enough for a league, those squads could compete in addition to their W-League fixtures, in a cup or interleague format.

Seattle continues to make strides toward linking up with the highly successful Sounders FC MLS team, as detailed in my chat with GM Amy Carnell last month on “This Week in Women’s Soccer.”

As for the Rapids Women, they will take advantage of sponsorship opportunities, the Rapids professional and intern staff and the Rapids identity. The women’s side will also play at Dick’s Sporting Goods Park, including three doubleheaders. The June 20 match against Colorado Rush will precede the Rapids-San Jose Earthquakes MLS match in the stadium, while the women will play on the training fields surrounding the stadium in doubleheader matches on May 26 and one more date later in June.

Don’t expect to see big name signings in Colorado for 2012. The finances just won’t support it, but maybe they will in 2013, Snider said.

Back to the bigger picture: The failures of WPS and the WUSA indicate that perhaps MLS is needed to help a full-fledged women’s professional league get off the ground in North America. Activists may call for independence from the patriarch, but MLS interest should be interpreted as a compliment that MLS, now a far bigger player in the American sporting landscape than ever, would be willing to invest money and resources into a women’s league. (It should be noted that there are entirely USL-run relationships, like the LA Blues of USL-PRO and the Pali Blues.)

“Looking back on my notes, it’s really years in the making,” Snider said of Tuesday’s partnership announcement.

So too is a proper, larger-scale partnership between MLS and women’s teams years in the making and years down the line. Stay patient everyone, this one will take a while, but in the end it will be the best avenue to travel.