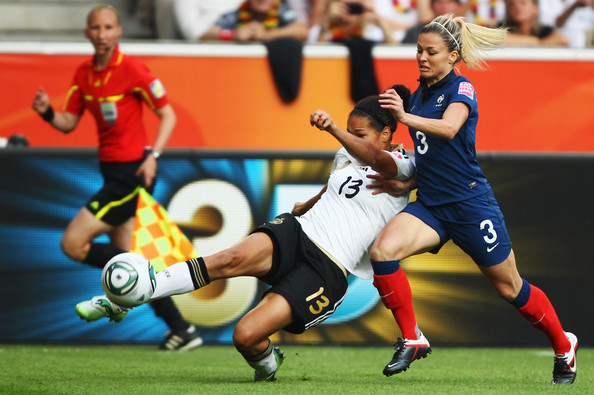 Germany claimed the 2012 Algarve Cup title in a thrilling 4-3 victory over Japan later in the day. After trailing 2-0 early, Japan clawed back to even terms before it looked like a Celia Okoyino da Mbabi penalty kick in the 88th minute would seal the deal for Germany, but that is just when the fun began. Yuki Nagasato equalized two minutes later for Japan and the match, already thrilling, looked headed for overtime.

But da Mbabi struck for her third of the game in the second minute of stoppage time on a brilliant individual effort. The 24-year-old flicked the ball up over the head of Japan goalkeeper Ayumi Kaihori and then bicycle kicked the ball into the back of the net from six yards out to give Germany the 4-3 victory.

One would think opposing teams would have by this point figured out they need to keep close tabs on Alex Morgan and Abby Wambach. Sweden failed to do so, but so has just about every team the U.S. has faced this year.

Morgan scored a hat trick on Wednesday to lift the United States women’s soccer team to a 4-0 win over rival Sweden. The three-goal performance is Morgan’s first career hat trick and now gives her 11 goals in nine games this year. Wambach’s goal gives her 134 in her career – second all-time internationally – and eight this year.

It did not take long for the 22-year-old Morgan to start the scoring. She finished a feed from Heather O’Reilly in just the 4th minute and added her second on an assist from Tobin Heat in the 33rd minute. Wambach scored three minutes later and Morgan got her third in the 72nd.

The win gives the Americans an emphatically positive way to end the tournament, but it also only hands them third place.

Here are highlights of the match, which, as should be expected anytime these two teams meet, was extremely physical: