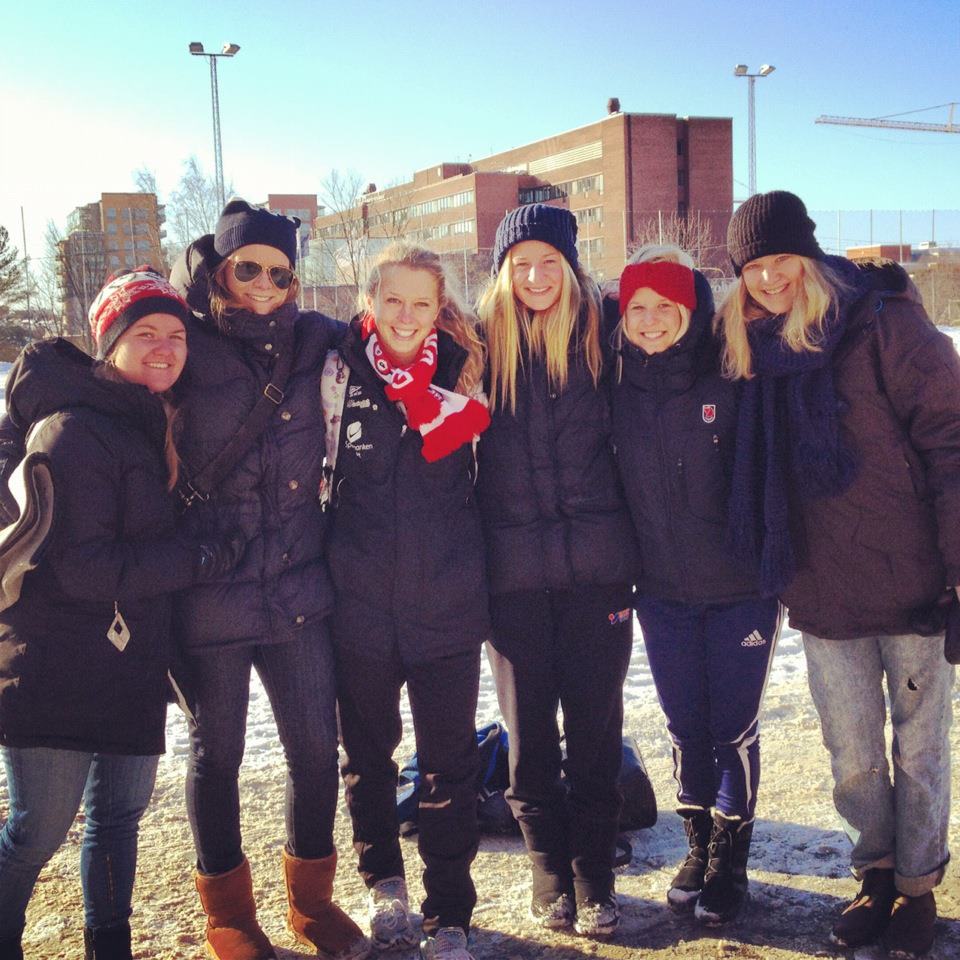 Ashleigh Gunning (third from left, red scarf) was joined by some of her friends in Sweden following one of her Arna-Bjørnar's matches in Stockholm, in which she learned some valuable lessons on how to dress for the cold of Scandinavia.

Anytime that someone moves to a new part of the world, you have to go through an adjustment period. It’s not necessarily a bad time—I think the best word to describe it is: AWKWARD for the person going through it (me) and HILARIOUS for anyone looking in from the outside (you)!

Just a couple of weeks after I arrived in Norway from sunny Australia we went to Stockholm for a couple of games where it was even colder than here in Bergen… yeah that was hard for me to believe too. Just my luck, let’s leave this Nordic country for another one that has had one of the coldest winters in recent memory.

Of course there are some bright points to this trip! Like I got to experience early the generosity and kindness of my teammates; this was best displayed through their willingness to lend me winter gear and help me figure out how to wear it. Because this southern girl has got no idea what to do with winter clothes! I’ll give you a specific example in a bit.

But, first let me paint a little picture for you:

We are in Stockholm and getting off our team bus at the stadium where we will be playing in a couple of hours and I look to my right and see the strangest thing, it’s like heads are floating through the air—what the heckkkk? So, I look a little closer and I realize that it’s an outdoor ice skating rink. Kids are practicing ICE hockey on the field next to where I am about to play—you have got to be kidding me! And the worst part? No one else was surprised! It was at this moment that I knew I was in trouble…

So, we proceed to our locker room to begin getting ready. I pull out the bag of winter clothes one of the girls let me borrow but I don’t want to be the first to start getting dressed—mainly, because I have no idea what order all of this is suppose to go on! I try to slyly ask someone if they are wearing leggings under their shorts—she wasn’t sure, so I ask someone else and much to my relief, yes, she’s going to wear them. Then our center back who was watching this exchange calls me out on the fact that I am asking because I don’t want to be the only baby wearing tights! (And here I was thinking I was being totally natural on the outside while mildly freaking out on the inside–NOPE). OK so, we’ve all had a good laugh and established the fact that I can’t handle the cold and need help getting dressed to be able to make it through this game. My amazing teammates help me and we go out to begin warming up.

I am wearing four layers on top with the fifth layer being a puffy stadium jacket, plus gloves, ear warmers, neck warmer and three layers plus two pairs of socks on the bottom, I’m ready for anything. It takes a while to get going but once we warm up and the game starts I am feeling good… of course I have to adjust my ear warmers and neck warmer a few times… this is the first time I’ve worn either while playing and it just felt strange! But, I make it through the first 45 minutes and head to the locker room that provides a great relief from the heavy winds that are blowing for halftime.

The second half is where the real trouble began for me. I now know that I must change all of my clothes at halftime because no matter the temperature, I will still sweat when playing—unfortunately I didn’t know it before this second half started… I got subbed off at about the 65th minute and as jogged over to the bench the only word I could muster were, “I’ve never been so cold in my life.” My assistant coach gave me the keys and sent me straight to the locker room and showers. (Our manager enjoys telling the story and saying that my face was gray when I came off.) As I was taking what felt like the longest 200 meter walk in my life I started to cry… I didn’t want to… but I had the biggest ol’ crocodile tears just streaming down my face because my finger tips hurt so bad that I was sure they were going to fall off. The only feeling I had in them was PAIN! The situation only got worse when I got to the locked locker room door– I had the key in my hand, but couldn’t get my fingers to work well enough to unlock it! A couple of minutes later I got the key to turn using a fist and an elbow. Don’t judge me—it worked!

Once inside, all I could think about was making my hands feel better and getting these freezing wet clothes off (again, it’s tough when your fingers don’t work). I went directly to the faucet and ran room temperature water over my shaking hands while trying to take off the 15 articles of clothing that seemed like such a great idea before the game. I was about halfway through this and in something I can only describe as a squatting fetal position when our forward, who had just been subbed out, walked in the locker room …I think it was at this moment I realized my dignity was still outside with the kids at ice hockey practice.

The good news is that I survived — the bad news is that I didn’t get normal feeling back in my right thumb for three days. Oh, and the ensuing flu and fever that took hold of my life the next day, which hasn’t given up the fight nearly three weeks later.

Our manager (the one who said my face was gray) now reminds me almost daily, “Det finnes ikke dårlig vær, bare dårlige klær!” Translation? “There is no such thing as bad weather, only bad clothing.”