Alex Morgan has done it again. The 22-year-old star forward from Diamond Bar, Calif. lifted the United States women’s soccer team to a dramatic 2-1 victory over New Zealand on Saturday in Frisco, Texas.

Morgan is used to scoring dramatic late goals in the final minutes of a game, she just usually does it off of the bench. On Saturday she went the full 90 minutes and then some in her most complete performance to date.

Morgan headed the ball into the goal twice in five minutes late in the match, erasing what would have been an improbable New Zealand victory. Her first goal somewhat controversially came in the 88th minute when she out-jumped her defender on Megan Rapinoe’s cross to nod the ball off the inside of the post an into the goal. There was some debate about whether New Zealand goalkeeper Jenny Bindon saved the ball in time, but American referee Moo Hackett ruled it a goal.

With New Zealand shaken, the Americans pounced on their opportunity to go for the victory. Three minutes into stoppage time, Abby Wambach flicked a ball into the path of Morgan and the young star headed the ball into the far side netting to give the U.S. a 2-1 victory.

The goals seemed to be in the making all evening for Morgan, who outran the entire New Zealand defense on a sprint from midfield just 10 minutes into the game, earning a penalty kick. Wambach would strike the penalty kick off the post, leaving the game scoreless, but it was clear early on that Morgan was ready for a strong performance.

New Zealand was up for the task as well, however. Just one minute after Wambach missed the kick from the spot, forward Hannah Wilkinson got in behind the U.S. defense and sent her shot from six yards out, on an angle, just over the crossbar.

But Wilkinson, who dramatically scored the stoppage time equalizer in a 2-2 draw against Mexico in group play of the 2011 World Cup, was persistent. In the 49th minute she intercepted an awful back pass from U.S. defender Kelley O’Hara that was intended for U.S. substitute goalkeeper Nicole Barnhart, who had just entered the match at halftime. Wilkinson’s half-volley chipped Barnhart and hit the back of the net, stunning the biggest domestic crowd for a U.S. women’s game since Nov. 2, 2003 (also in Dallas at the Cotton Bowl – a 3-1 win over Mexico).

Morgan had the last laugh, however. It’s been a big week for arguably the most popular active American soccer player. On Friday it was revealed that she will appear in this year’s Sports Illustrated Swimsuit Issue wearing nothing but body paint. The issue hits newsstands Tuesday. Share your thoughts on that move here.

Video and a still shot of Morgan’s first goal (the only vantage point that can really give a definitive answer is that of the assistant referee on the goal line): 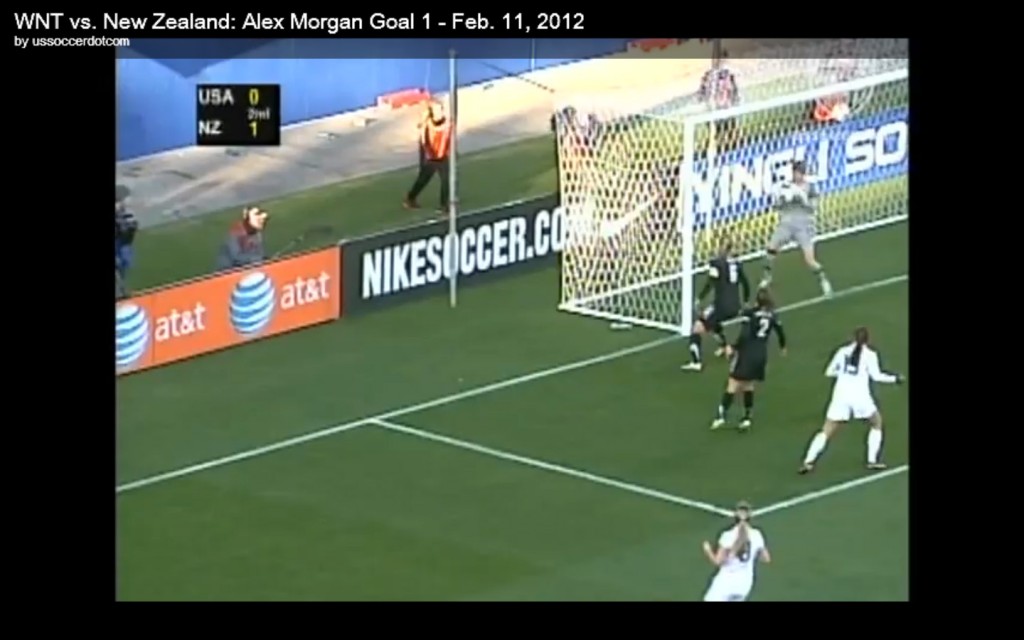 In or not? This angle won't tell us.