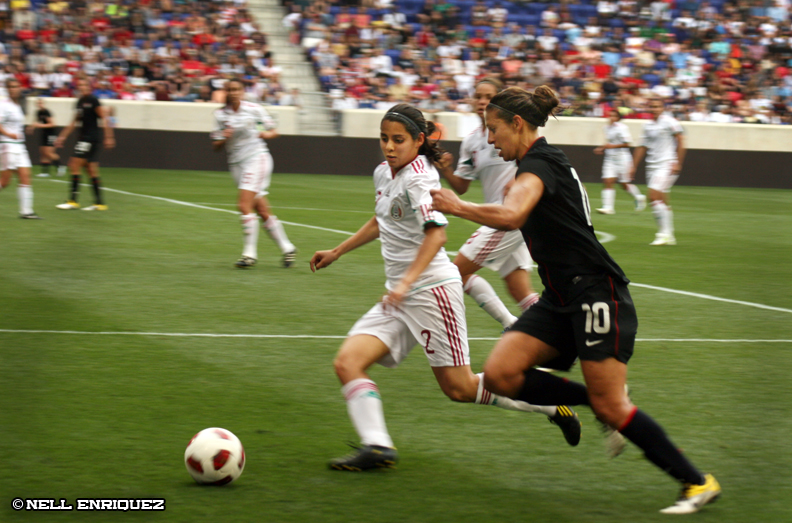 This time the U.S. did not demoralize its opponent as it did in the first two games of qualifying. This was not a 14-0 win over the Dominican Republic like Friday brought. It was not Sunday’s 13-0 thrashing of Guatemala, but Tuesday’s game against Mexico looked like it could go that way early on.

Carli Lloyd headed the ball into the back of the net in the seventh minute after Rachel Buehler’s close-range shot smacked the post. One minute later, Heather O’Reilly tapped-in a second for the Americans.

Floodgates, open. So it seemed anyway.

Minutes later, Abby Wambach’s shot was cleared off the line by Mexican defender Natalie Garcia. That could have made things really ugly, but from there Mexico managed to settle into the game – or, at least, bunker down into a more sound defensive shell.

The Americans dominated most of possession and held Mexico from any threatening chances.

Heather O’Reilly tore up the right flank all evening and Mexico had no defensive answer. Lloyd carried the U.S. in the scoring department, scoring her second – also on a header – in the 57th minute. Her third came in the 86th minute and was an easy tap-in.

Tactically, the United States proved superior, as expected. Coach Pia Sundhage pulled out a mild surprise when she slid Rachel Buehler to right back and inserted Becky Sauerbrunn into the starting line-up as Christie Rampone’s co-center back.

That back four looked fine, but lacked in any real test. Sundhage has started a different back four in each of the three games this qualifying tournament and none of them have faced any serious threats from opposition.

The U.S. proved versatile enough to change not only personnel but also systems. The new 4-2-3-1 formation shifted into a more traditional 4-4-2 in the second half. Lauren Cheney switched from an attacking midfielder role to pairing up top with whiz kid Sydney Leroux when Megan Rapinoe replaced Abby Wambach in the 61st minute.

Oh, and three of the four U.S. goals – all of Lloyd’s – came off of set pieces. The age-old saying proclaims that set pieces win games, and the U.S. proved that (as it usually does) again on Tuesday.

What does this all mean for qualifying? The U.S. now takes on Costa Rica on Friday at 8 p.m. ET in the semifinal with the winner advancing to the Olympics in London this summer.

Costa Rica stands very little chance if the U.S. continues to play the way it has this tournament. Canada dismantled Costa Rica 5-1 on Monday. Costa Rica’s biggest weakness is in defense, which is not good for a U.S. game that has such a strong attack.

Mexico now must take on host Canada in Friday’s other semifinal, which has to be a concern for El Tri. Canada is on a roll, in similar (but slightly less emphatic) fashion as the U.S. This tournament looks destined for USA-Canada final, which should be a real dandy. It’s too bad the game won’t count for anything meaningful.

Guatemala beat up on the Dominican Republic 6-0. Wendy Pineda scored a hat trick while Maria Monterroso scored twice and Ana Lucia Martinez chipped in a goal as well.