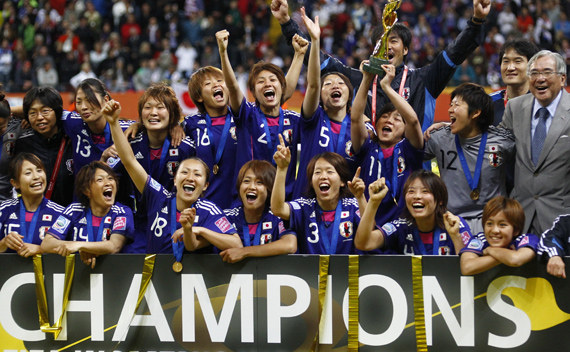 Let’s skip the sentimental business. Another year flew by faster than it should have and we are staring 2012 right in the face. In a landmark year for women’s soccer, it is only appropriate to take a look back at the year that was. We have already given out the end of season WPS awards here at The Equalizer, so it is time for a broader scope. Here are some memories from 2011 –

Best Dance: Could this be anything but the Haka? New Zealand earned its first-ever points at a Women’s World Cup after drawing Mexico 2-2 in the final group stage game on July 5. After going down 2-0 early with Mexico in need of a large margin of victory, Rebecca Smith scored in the 90th minute and Hannah Wilkinson found net in the fourth minute of stoppage time for the equalizer. Check out the celebration that ensued for the Football Ferns:

Biggest Surprise: Canada’s World Cup performance – It is one thing that Canada did not get out of Group A. That is understandable, given the Group of Death featured host Germany, a rising French team and a resilient Nigeria team. But Canada was embarrassed, losing all three games including a 4-0 rout by France. For a team that had ambitions at winning its first-ever World Cup, it was utter disappointment.

Player of the Year: Homare Sawa (Japan) – It is very tempting to select U.S. forward Abby Wambach for this award, but I really think that is an anglocentric view of the year. The bottom line is that Homare Sawa led her team to a World Cup title. By the world’s estimations (and particularly those of the Germans), Japan had no business winning that World Cup. Nearly everyone wrote off the Nadeshiko against Germany in the quarterfinals, but Japan thought otherwise. Sawa, then 32, made sure her fifth World Cup ended in glory. Her 117th minute equalizer in the final against the U.S. led to penalty kicks, where Japan sealed the deal. For Sawa and Japan, it was a dream come true.

The Marla P. Messing Executive of the Year: Steffi Jones, president of the Women’s World Cup 2011 German Organizing Committee – 1999 may forever live in the hearts of women’s soccer fans as ‘the breakthrough,’ but the 2011 World Cup was truly the best yet both on and off the field from a global perspective. A lot of people put a lot of work into this event, but Jones was the face of the coordination. Her legacy will be that 20 years from now, we’ll look at Germany 2011 as a watershed event in women’s soccer.

The Carla Overbeck Defender of the Year: Saki Kumagai (Japan) – Kumagai held together the Japanese back line on its magical run to a World Cup title. At only 21 years old, Kumagai should be a fixture for Japan in the years to come. She also gives Japan at least a hint of physical presence as the team’s tallest player at 171 centimeters.

The Michele Akers Bravery Award: Christine Sinclair (Canada) – Sinclair played through what was surely excruciating pain in the World Cup to attempt to lead Canada to victory. The victories did not come, but Sinclair was the only Canadian to score in the tournament. Despite playing with a broken nose and a mask that made her look like a Marvel Comics superhero, Sinclair still played with her heart on her sleeve and showed why she is Captain Canada.

The ‘Sexy Football’ Award, in honor of Ruud Gullit’s cliché but too fitting not to use phrase: France – Bruno Bini had Les Bleues playing a brand of football so easy to watch that it was hard for any neutral not to route for the surprise semifinalists. France outplayed the U.S. for large stretches in a 3-1 semifinal loss and arguably deserved more from the match. France is really a team to watch with young stars like Louisa Necib, Gaetane Thiney and Marie-Laure Delie. Ruud Gullit would be proud of France’s attacking, technical play. And in literal terms, a few French players actually tried to controversially sell ‘sexy football’ to the French public in the German magazine Bild. That came just weeks after the German women’s national team posed for suggestive photos in Playboy. Hopefully women’s soccer finds its way in the sports landscape without having to again turn to such publicity tactics. Germany and France sell themselves on great soccer. It would be cool to see some more poetry in women’s soccer, like Bruno Bini presented during the World Cup.

Biggest Surprise: Canada’s World Cup performance – It is one thing that Canada did not get out of Group A. That is understandable, given the Group of Death featured host Germany, a rising French team and a resilient Nigeria team. But Canada was embarrassed, losing all three games including a 4-0 rout by France. For a team that had ambitions at winning its first-ever World Cup, it was utter disappointment.

Most Ironic Randomly Generated Advertisement: This magicJack Plus advertisement on the site, which appeared on the story regarding magicJack’s termination: 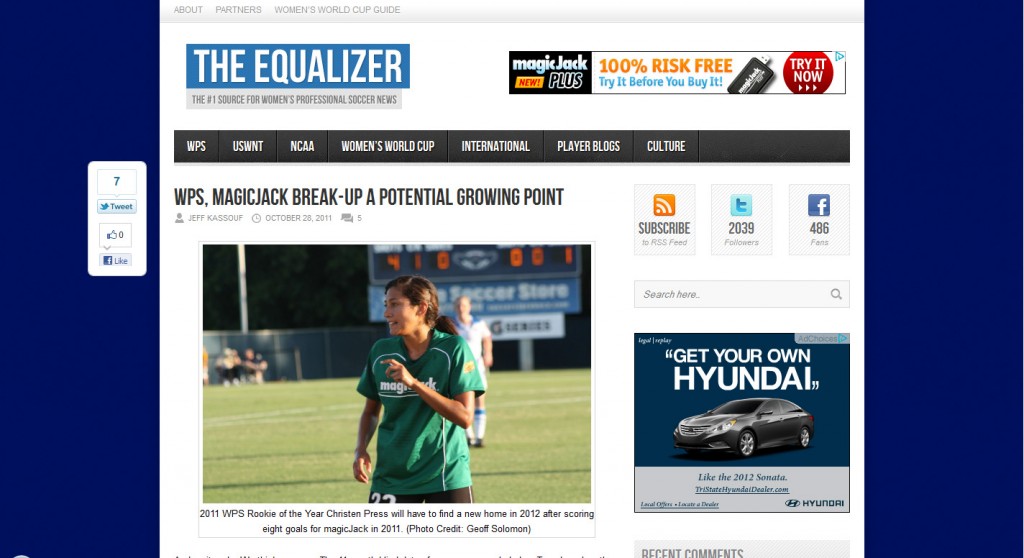 Advancement in Women’s Sports Media: ESPN – The production of the Women’s World Cup was truly top notch and espnW did a fine job of adding online coverage to ESPN’s TV offerings. Granted, the argument that it was in ESPN’s best interest to hype the games as much as possible is a fair point. Obviously the network wants to obtain good ratings. But at the same time, you could tell that the World Wide Leader in Sports got the sense that the 2011 Women’s World Cup was something special and ESPN treated it that way. Then, espnW followed that up with a fine commitment to WPS and the U.S. national team news and analysis.

Favorite Article I Wrote: “Unique culture helps Messiah soccer dominate” – I guess I am just a sucker for Division III soccer, but if you know me than you know why (hint: I played Division III ball). I chose this because I truly enjoy bringing my readers something different; stories that aren’t covered regularly. Yes, everyone knows Messiah College dominates in men’s and women’s soccer, but it was nice to delve beyond the surface. From the amount of social media feedback the article got, readers clearly enjoyed the article, too (for which I thank all of you).

WoSo City of the Year: Rochester, NY – A lot happened in Rochester, NY, this summer and I had the pleasure of being there through it all. A championship team came together there (well, really down the Thruway in Elma) as the Western New York Flash raised the trophy. We saw a WPS record crowd of 15,404 watch the Flash beat magicJack 3-1 on July 20. The pandemonium that surrounded that World Cup homecoming was unbelievable. During the World Cup there was also the Back Nine Bar & Grill and nearly a daily front page story on Abby Wambach in the Democrat & Chronicle. I have to go back through the newspapers, but in the course of 11 days from the Brazil quarterfinal to July 21, over 50 percent of the front pages had Abby Wambach and the U.S. team on the front page. Check out a recap of the week here.