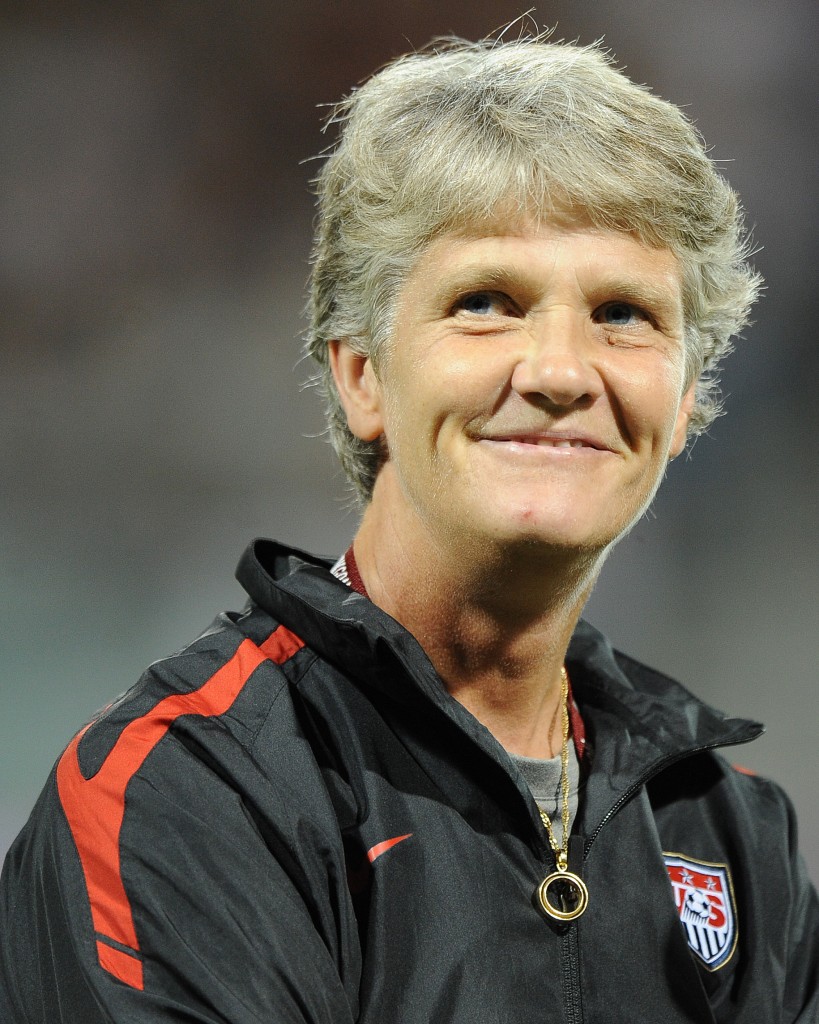 Pia Sundhage leads the U.S. women into Vancouver in January looking to qualify for the Olympics. The U.S. is the two-time defending Olympic champion. (Patricia Giobetti | http://www.printroom.com/pro/psgiobetti)

After coming away with the gold medal in Athens in 2004 and in Beijing in 2008, the chances are high that the U.S. women’s national soccer team can make it an Olympic three-peat at the 2012 Summer Olympics in London.

But before fans can start purchasing Olympic soccer tickets, the U.S. first has to navigate through next month’s qualifying tournament. The qualifying tournament, which will be held at BC Place in Vancouver, begins on January 19 and will culminate with the final on January 29, and the two teams that reach the final will join the likes of Brazil, France, and reigning Women’s World Cup champions Japan in next summer’s 12-team final tournament.

The format for the upcoming tournament has changed somewhat, expanding from six teams to eight, with the teams split up into two four-team groups. So, instead of playing two group matches as was the case last time around, the U.S. will play three. However, the knockout phase does remain the same, as each group winner will face the runner-up from the opposite group in the semifinals to determine who takes the two Olympic berths.

Group A includes Canada, Costa Rica, Cuba, and Haiti. Host team and reigning Women’s Gold Cup champions Canada will be favored to win the group, while Costa Rica, who lost out to the U.S. in the third-place playoff in the 2010 Women’s Gold Cup, should advance to the semifinals as well.

Group B will include the U.S., Guatemala, Mexico, and the Dominican Republic. Mexico, who upset the U.S. in the 2010 Women’s Gold Cup semis and lost 1-0 to Canada in the final, should be the other semifinalist from Group B.

The U.S. will open the tournament with a match against the Dominican Republic on January 20 and will face Guatemala two days later. Then, on the 24th, the U.S. and Mexico will face off, likely with top spot in Group B at stake, if the other results go as expected. That match stands to be an extremely important one, as the winner will likely avoid the host team in the semis, thereby aiding their chances to move on to the final and book a ticket to the London Olympics.

It’d be ideal to not have to deal with a semifinal showdown with Canada, who are ninth in the FIFA Women’s World Ranking ahead of Friday’s update, are solidly the second-best team in CONCACAF behind the U.S.. and will no doubt be confident about their chances to topple the U.S. on home soil.

That being said, the U.S. will be ready and able to take on Canada, whether it’s in the semis or in the final, as they went an unbeaten 2-1-0 against Canada in 2011, including a 3-0 win in the most recent meeting on September 22. Also, coach Pia Sundhage will be able to call on all of her big guns, including captain Christie Rampone, star forward Abby Wambach, and super sub extraordinaire Alex Morgan. Those three were among the 31 players called up for an 18-day training camp this month at the Home Depot Center in Carson, California, and they’ll most certainly be a part of the 20-member squad that Sundhage will pick to take to Canada following another training camp at the Home Depot Center next month.

As much as the team will expect to not only qualify but to also win the qualifying tournament, it‘s fair to say that they won‘t overlook or underestimate. As disappointing as the penalty shootout defeat to Japan was, it will be equally disappointing to miss out on the Olympic tournament and a potential chance to avenge that defeat, so you can be sure that the U.S. will bring their best in Vancouver next month.

Attending the London Olympics? TicketBis has you covered with tickets for key Olympics events.

REPORT: USWNT drawn into Group B with Japan for 2012 Algarve Cup
Thursday news and notes