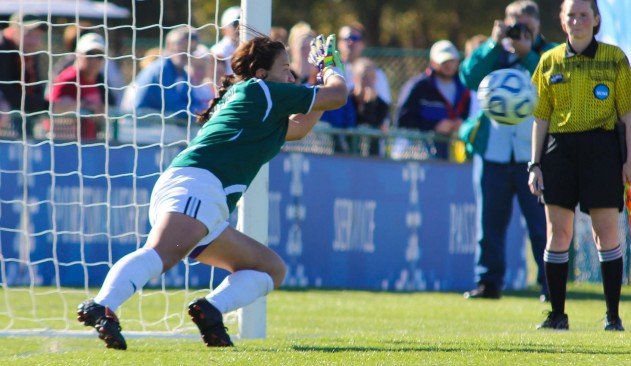 Grand Valley got a tough test in the semifinal from underdog Chico State. It looked like the two-time defending champions would cruise to victory when junior Maria Brown gave Grand Valley State the lead just 53 seconds into the game on an impressive snap-header.

But Chico State was resilient. Blake Lopes flicked on a corner kick to Lisa Webster in the 86th minute and Webster headed it into the back of the net for the late equalizer. A scoreless extra time brought penalty kicks, which was bad news for Chico State.

That is because Grand Valley boast Chelsea Parise in goal, who for the second time in the 2011 tournament made three penalty kick saves to lift her team to victory. Saint Rose better make sure the game isn’t decided from the spot.

Speaking of Saint Rose, the slightly favored Golden Knights took down Armstrong Atlantic State with an early goal from Carmelina Puopolo in the seventh minute. Puopolo bent a corner kick straight into the net. Puopolo’s goal brought her season point total to an incredible 47 pts. (17 goals, 13 assists), which leads the team.

Brittany Barry scored her 15th goal of the season in the 30th minute to give Saint Rose the cushion it needed.

Oh and captain Christina Cuffari missed a penalty kick right before halftime. Saint Rose will really be hoping to win from the run of play on Saturday.

This Saint Rose senior class, which includes Cuffari, is making its debut in the national championship game after making the final four for the fourth-straight year. Grand Valley State is in its fourth title game in six years and seeking its third-straight championship.