An Albany adventure: A look-in on Division II 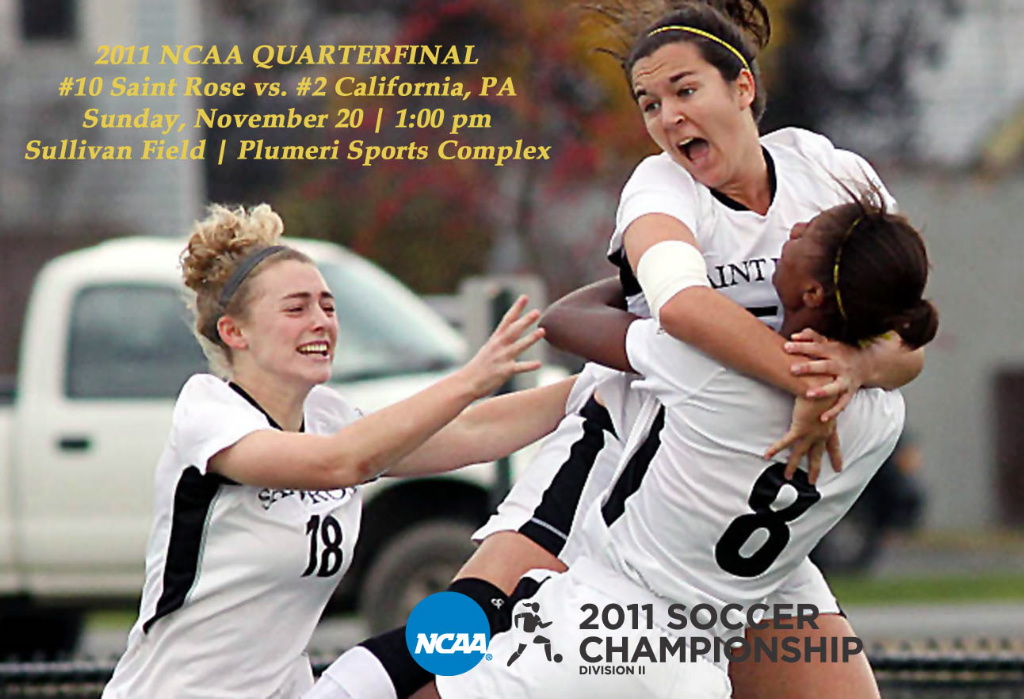 Hello from LA, women’s soccer fans. Things just got heavy again in the world of women’s soccer with Friday’s news of Dan Borislow’s latest legal action against the league. The U.S. women also drew 1-1 with Sweden in front of a great crowd of 18,482. More on those later.

On a lighter note, I thought I would share some thoughts on Friday’s women’s Division-II East Region Sweet 16 match-ups with you all.

Spoiler alert: Sunday’s national quarterfinal between host Saint Rose College and California University of Pennsylvania – a rematch of the 2009 national quarterfinal match-up – should be a dandy. I’ll be taking in that sort of big MLS Cup match, but if your within shouting distance of Albany, N.Y., I would suggest making the drive to check it out (kickoff is at 1 p.m. ET at the Christian Plumeri Sports Complex in Albany, literally right off the highway; where I-87 and I-787 meet).

On a windy but typically chilly Friday in Albany, Saint Rose and Cal-Pennsylvania proved to be far superior to their opponents, UMass-Lowell and Slippery Rock, respectively.

Saint Rose dominated the first match of the day to the extent that my rough estimate of possession would be about 80 percent in favor of Saint Rose. The Golden Knights only won the match 2-1, but the statistics (Saint Rose outshot UMass-Lowell 15-4) don’t even begin to tell the story.

The visitors didn’t even show up to play until the final 10 minutes of the match. Hannah Merullo made it interesting when she finished a loose ball in the box in the 84th minute, but it was not enough to overcome Saint Rose goals from Brittany Barry and Carmelina Puopolo.

Barry put Saint Rose ahead in the 34th minute on a pretty routine finish off a low pass from D-2 East Region Player of the Year Christina Cuffari. Puopolo was also the beneficiary of a Cuffari pass to double the lead in the 72nd minute, although Puopolo had to do a lot more with the ball to find net. She received the ball to the left of goal, beat UMass-Lowell right back Sydney Bond and sent a low shot to the far post past goalkeeper Jane Hatzikonstantis.

Truthfully, UMass-Lowell never had a chance in this game. How the Riverhawks grinded out a penalty kick victory over East No. 1 seed Bridgeport in the second round is beyond me. Here’s an eye opening comparison:

Coming into the game, Saint Rose had five players who each registered over 25 points. UMass-Lowell had Brittany Russo, who had 10 goals and one assist in 2011. Maddy Bissaillon was the next closest with two goals and six assists.

Breeanna Robinson is clearly the player to watch for Cal-PA. She scored in just the eighth minute to give the Vulcans a 1-0 lead over Slippery Rock. The goal was her 19th of the season, tying a school record. From what I observed on Friday, Robinson is lightning fast and a great distributor of the ball. Oh yeah, she leads Division II in game-winning goals with eight. Chaning Wimer had the other goal for Cal-PA.

Robinson could very well be too much for the Saint Rose back line to handle on Sunday. The Golden Knights have offensive power, but could prove vulnerable to Cal-PA’s speed up top.