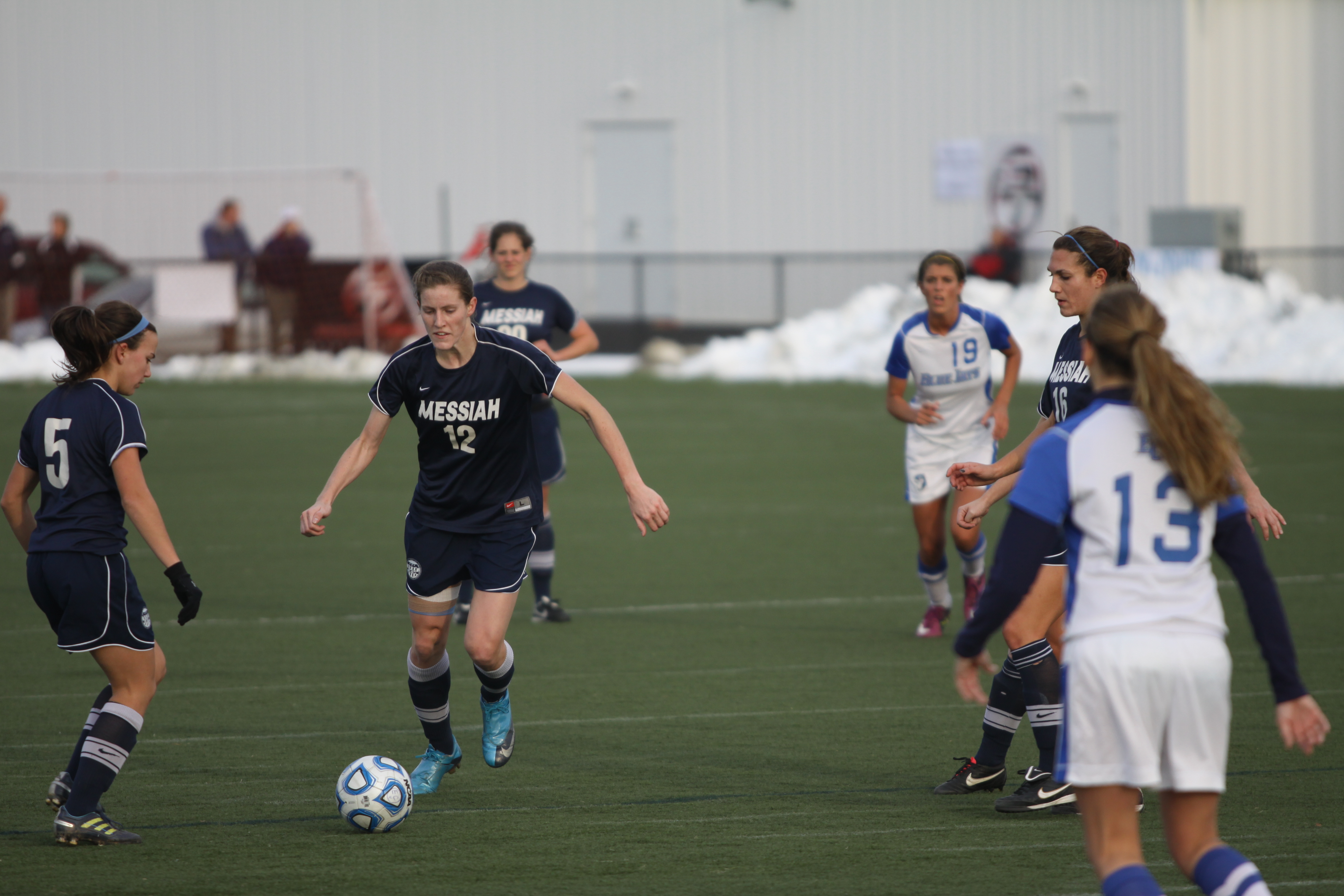 Messiah College redshirt senior forward Erin Hench (12) is a part of a group of players that has helped build a college soccer dynasty in Grantham, Penn. But the Messiah women play for more than individual glory. (Courtesy Photo)

College soccer programs across the country talk about ‘building a culture.’ Every August teams assemble in training camp to maintain high program standards or, more likely, to find a way to elevate team expectations.

Playing tough soccer. Winning on the road. Showing up to team events 20 minutes early in matching team gear. To most that is how to build a ‘culture’ around a collegiate soccer program.

Messiah College, however, brings a whole new level to the meaning of the phrase.

The Messiah men have won eight of the last 11 NCAA Division III national championships, while the women have claimed three titles since 2005, including two of the last three. Last season’s 2-1 championship loss to Hardin-Simmons is all that prevented a three-peat for the Falcons women.

On Thursday evening, the Messiah women open up play in the Commonwealth Championships, their conference tournament, against Albright College. The Falcons (15-0-1) are again ranked No. 1 in the country as postseason play commences.

As they search for their third national title in four years, pinning down exactly what makes the program so successful has eluded coaches around the country trying to replicate that success.

“I think a lot of people try to (figure it out),” Messiah women’s head coach Scott Frey said. “There are a lot of little things. I think there is a group of young women who are really committed to the whole team concept. They are willing to play anywhere and willing to do anything.”

The theme around the team is ‘service and selflessness.’ That produces a scene where seniors are picking up equipment and players write notes of encouragement to each other. There are no egos; just a family environment.”

“They do all the stuff that I think in a lot of cultures, it is upside down,” Frey said. “‘Prove yourself; you get the water; you do this.’ It’s just a different culture.”

And it is a culture very heavily tied into the beliefs of the Grantham, Penn.-based Christian college. Players don’t compete for individual accolades.

“Playing for God is the basis of our program,” senior goalkeeper Autumn Reilly said.

“I think it is the ability for us as players to work for something that is bigger than ourselves, not necessarily going out and playing because individually we want to know how good we can be. It brings in a whole dynamic of a group.”

Reilly is part of a senior class that has lost just one game – last year’s national championship – in nearly four full seasons. This season Reilly has given up two goals in 16 games.

That type of dominating success, explained redshirt senior forward Erin Hench, is not a given. Everyone has an off day; it just seems that Messiah rarely ever has one. According to Hench, the Christian ideals of the college and the soccer program help the team push through tough situations.

Hench ranks second on the team in points (26) this season behind the dominant Corinne Wulf, who has 16 goals and 5 assists (37 points) this season. Along with Alex Brandt (24 points), the two have combined to help replace the scoring hole left by the graduation of Amanda Naeher, who tallied 107 goals and 36 assists in 101 career games at Messiah from 2007-2010.

The defense has also been strong. Messiah lost three center backs due to injury prior to and early into the season, forcing several unexpected changes. Kesley Gorman is the rock at the back, but Alicia Frey, daughter of coach, Scott, has moved from forward to center back and been solid, Reilly said.

The goal for Hench, who missed the 2010 season due to injury, and the rest of the Messiah squad is another national championship. The team’s motto is “win the next game and win the last game,” alluding to both short- and long-term goals, with the national championship being the ultimate objective.

Messiah will likely be in the mix again come Dec. 2 when the final four remaining teams converge upon San Antonio, Texas. And with the unprecedented ‘culture’ the program has built, that does not look like it will change anytime soon.

Recent successes have brought great attention to the school and the team, but Frey said recruiting is not as easy as some people think. Recruiting classes are composed of a niche group of players who desire to be part of the overall Messiah lifestyle.

Many players, like Hench and Reilly, come to summer soccer camps at Messiah to get a feel for the environment. Hench, who has known Frey since her childhood (Hench’s father, Bill, roomed with Frey while at Messiah in the ‘80’s), began attending Messiah soccer camp when she was in sixth grade.

She looked up to players on the team then and now finds herself in the role of mentor. Hench is helping midfielder Tannia Nieto, who would have been a third-year player this season, get through the recovery process after Nieto tore her ACL over the summer.

Hench makes sure Nieto feels comfortable and, along with the rest of the team, writes Nieto letters of encouragement just as the team did for Hench when she was injured last year. That is the type of culture future players can expect at Messiah. The fit is obvious from the start, Frey said.

“In our recruiting process it is so evident who we are, that a player, when she comes here, one of two things happens,” he said. “It’s either, ‘this is not the place for me,’ or, ‘this place is unbelievable. I’ve never seen anything like it because they actually care about me and they love me here.’”