Riley returning to Flash in 2012 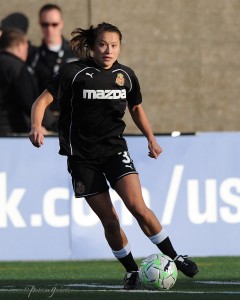 Ali Riley will be back with the WNY Flash next season. (Photo Credit: Patricia Giobetti/www.printroom.com/pro/psgiobetti)

The Western New York Flash announced on Friday that outside back Ali Riley has re-signed with the team for next season. Riley helped lead the Flash defense to the 2011 WPS Championship while being selected to the WPS First XI team.

“Ali’s proven the last two seasons that she is the best outside back in the WPS,” Flash head coach Aaran Lines said in a statement. “She came to the Flash in 2011 and did a great job for us both defensively and offensively down the left side. I will be looking to her in 2012 to be a leader on this team as we look to be the first team in WPS history to retain the championship.”

In 2011,Riley played in 15 games for the Flash, starting all of them while registering one assist. The championship was her second-straight after winning the title with FC Gold Pride in 2010. Riley was also named WPS Rookie of the Year in 2010.

Abby Wambach said she was only joking when she hinted that she may be interested in playing for the Western New York Flash in an interview on Friday. It seems that the joke was taken out of context. Wambach is still under contract with magicJack.