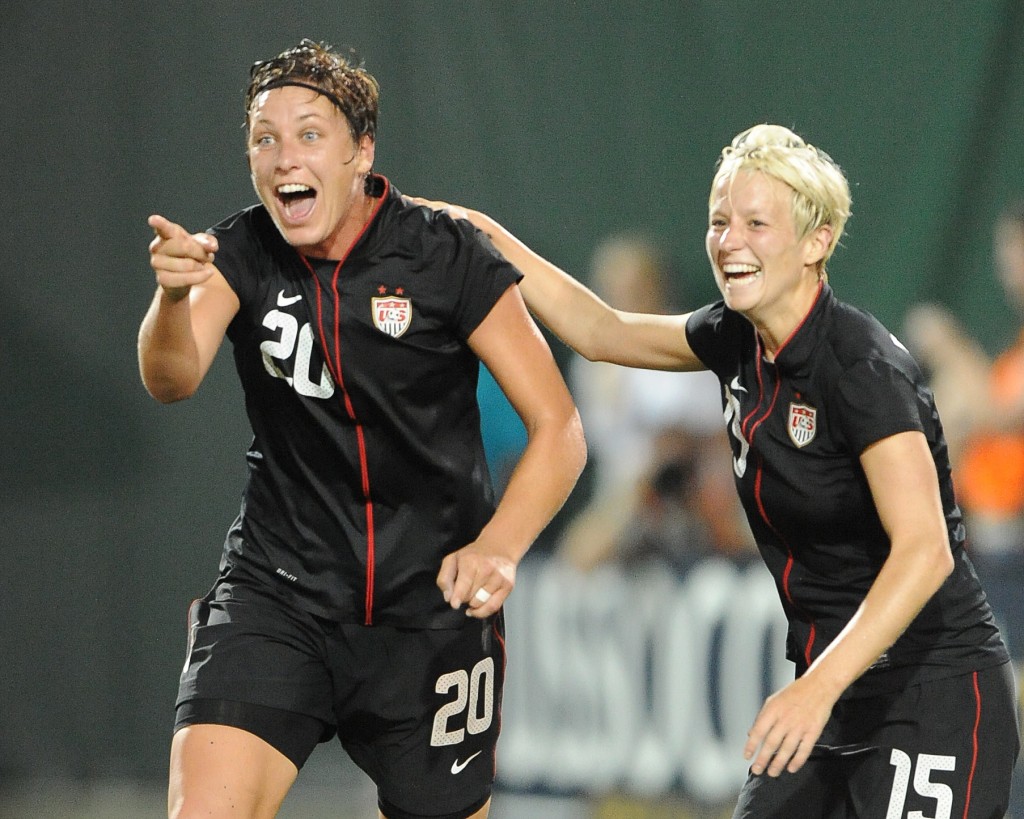 Abby Wambach celebrates her second goal in a 3-0 win over Canada on Thursday in Portland, Ore. (Photo Credit: Patricia Giobetti/http://www.printroom.com/pro/psgiobetti)

The U.S. women’s national team defeated Canada 3-0 in dominating fashion on Thursday at JELD-WEN Field in Portland, Ore. Two second half goals in a seven minute stretch from U.S. forward Abby Wambach sealed the game for the Americans, but the display was dominant from the start.

Wambach finished a left-footed laser from 18-yards out to give the U.S. the lead in the 63rd minute before heading in her second on the goal line in the 70th minute. Alex Morgan’s tap-in goal was the final kick of the game.

U.S. head coach Pia Sundhage continued the transition to a 4-2-3-1 formation that she unveiled publicly last week in a 1-1 draw with Canada in Kansas City.

The one midfielder advantage (Canada played a traditional 4-4-2) was obvious from the start as the U.S. exploited space on the flanks. Heather O’Reilly, playing on the right side of the three attacking midfielders to start the match, exploited the space given to her by an out of sync Canadian midfield.

Canada’s midfield diamond never actually looked like one. As play shifted to one side of the field, so too did the entire middle four — Diana Matheson, Kelly Parker, Kaylyn Kyle and Sophie Schmidt — for Canada, leaving the quick switch open for the Americans. O’Reilly and Amy Rodriguez frequently interchanged to wreak havoc between the 18-yard boxes, but Canada’s defense held strong through the first 45 minutes.

Goalkeeper Karina LeBlanc’s point-blank save of Rodriguez’s shot in the 16th minute helped keep the game scoreless, as did defender Christie Rampone’s six-yard shot at the back post that went just wide 10 minutes later. Rampone began the match at center back but frequently swapped positions with right back Becky Sauerbrunn, allowing Rampone to push forward throughout the first half.

Just seconds after that Rampone miss came Canada’s first legitimate chance when Melissa Tancredi put her shot just wide of goal. Otherwise, the Canadians failed to test U.S. goalkeeper Hope Solo, who was honored before the match for receiving her 100th cap (which came in the World Cup final against Japan on July 17).

Megan Rapinoe continued to prove dangerous and hit the crossbar twice — first from six yards in the 33rd minute and again from 27 yards in the 39th minute.

She was not the only one with bad fortune Thursday evening. Canada was denied by the woodwork as well when Christina Julien hit the same crossbar in the 48th minute. That was part of an early second half surge from Canada that the U.S. successfully held-off before taking the lead on Wambach’s goals.

Kelly O’Hara’s sideline pressure forced Desiree Scott into an errant back pass deep in her own territory and Wambach turned and fired the ball into the far side netting to give the Americans a 1-0 lead. Seven minutes later, it was O’Hara’s back post cross that Wamabach got on the end of by diving around a flat-footed Rhian Wilkinson.

Morgan entered the game for Shannon Boxx in the 77th minute and the U.S. shifted into a 4-4-2 formation. The slew of substitutions from both teams (six each) slowed the pace of the game in the dying moments, but Morgan tapped in Lauren Cheney’s knock-down header off a Tobin Heath cross to finish the game 3-0 in favor of the U.S.

Canada spent much of its time defending as it adjusts to new head coach John Herdmann, who has had only a week to work with his new team. He has four months to put his stamp on the last-place finishers in the 2011 World Cup. Olympic qualifying takes place Jan. 19-Jan. 29 in Vancouver and the U.S. and Canada will enter that as favorites.