Beat looking for forwards to complement Chalupny in 2012 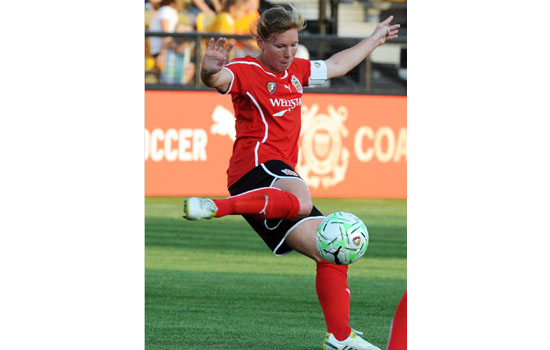 Lori Chalupny had another great year for the Atlanta Beat despite a tough season for the team. Atlanta is looking for forwards in the offseason. (Photo Credit: Perry McIntyre/ISI Photos)

Atlanta Beat midfielder Lori Chalupny last played for the United States women’s national team on Oct. 29, 2009 in a 1-0 victory over Germany in Augsburg. She hasn’t donned the red, white and blue uniform since.

Repercussions of several head injuries have kept U.S. Soccer consultant Dr. Ruben Echemendia, a clinical neuropsychologist, from clearing Chalupny to play for her national team. She has been cleared by doctors with the Atlanta Beat and Saint Louis Athletica, her former team.

But Chalupny has not had an international stage to conquer in years. She did not join the U.S. in Germany for its storybook second place World Cup finish.

“I’m not upset by it,” Chalupny said. “I of course want to play there because that is the highest level, but I am proud of what I accomplished at that level and if I never play there again, I’ll be happy with my career. But of course, yeah, I’d love to play there.”

Chalupny spent 2011 as a diamond in the rough in Atlanta. She scored twice in 17 games for Atlanta and constantly stood out on the field despite the team’s 1-13-4 record.

Atlanta Head Coach James Galanis called Chalupny “one of the top five players in the world.” At the time of her last appearance for the U.S., she was one of the team’s best players. She wore the captain’s armband for that win against Germany.

Chalupny’s absence from the U.S. picture has not affected her stellar play.

“She encourages all the young players,” Galanis said. “At training she is always the hardest working player at training, week-in, week-out. And then on the field, I don’t think I’ve seen her have a bad game yet.”

Now the primary goal for building the Beat this offseason is finding true forwards to compliment Chalupny’s superior vision and playmaking. Galanis noted that Atlanta lacked a natural forward this year. The Beat instead relied on midfielders converted to forwards, which explains why the team managed just seven goals in 18 games.

One forward will not be enough, either. Chalupny talked about needing a pair of goal-scorers, but Galanis wants even more. He envisions signing four strikers through free agency and the international market, where he has his eyes on players from Sweden, Germany, France and Australia.

That potential group of strikers would mix with youngsters Katherine Reynolds, Megan Jesolva, Kylie Wright and Analisa Marquez – all of which Galanis praised.

A fully developed group of young players complimented by proven strikers could thrive when connected by Chalupny’s play in the center of the park. But a long offseason of work will be required to turn that into reality.

As for Chalupny, she may be wearing only the mustard and red Beat jersey yet again in 2012. Nothing has changed in U.S. camp. Dr. Echemendia looks at “the number of concussions sustained by an athlete, how closely over time they occurred, the severity of the symptoms and how long those systems lasted,” according to a U.S. Soccer spokesman. At this point, Chalupny still is not cleared for international play.

“I have actually talked to Pia (Sundhage, U.S. coach), but it is just really out of her hands,” Chalupny said. “I don’t know what else I can do at this point.”

Eileraas resigns from WPS post
In WPS, change is the operative word